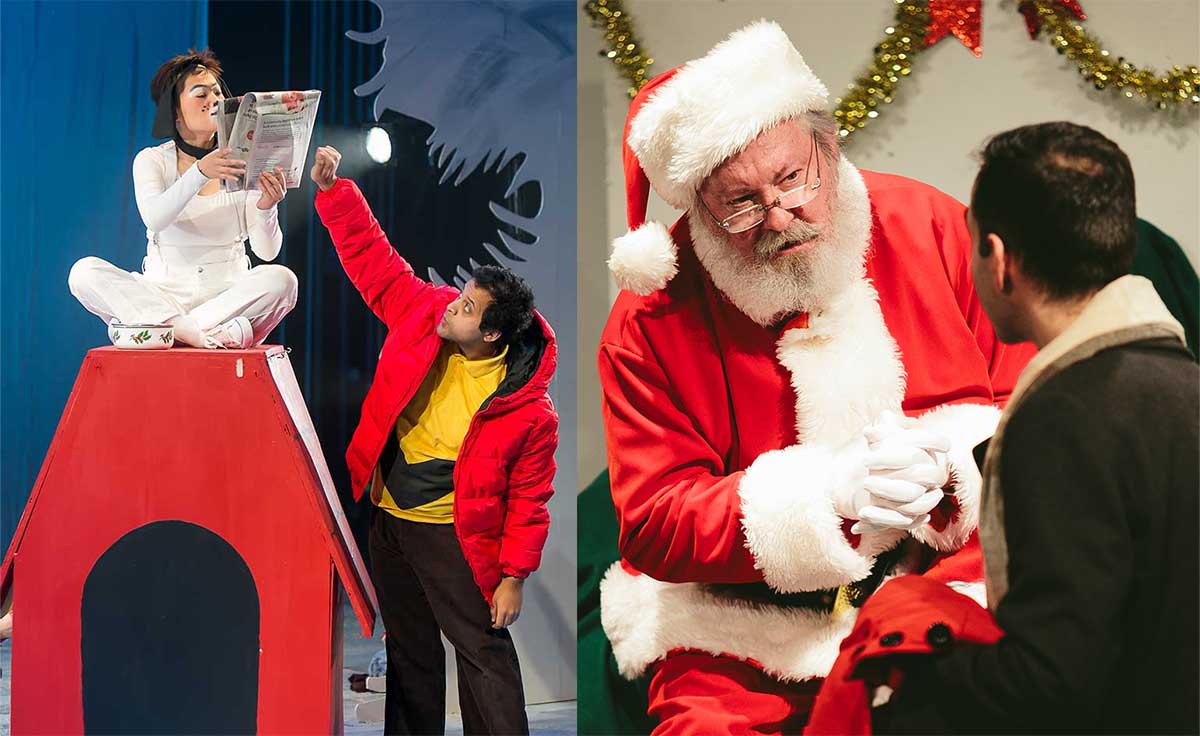 CNY Playhouse and Syracuse Stage are ringing in a thespian’s holiday with two seasonal stage shows.

Tis the season for yuletide productions, with local companies cramming them in as popular diversions during the too-brief holiday-shopping window.

A Charlie Brown Christmas, making its local stage debut through Sunday, Dec. 16, at the Redhouse Arts Center, should never be confused with Clark Gesner’s You’re a Good Man, Charlie Brown, a community theater perennial. The Christmas show is based on the 1964 CBS-TV special, with a jazz score by Vince Guaraldi. Whereas Charles M. Schulz’s ever-endearing Peanuts comic strip is existentialism-lite, the kid-friendly Charlie Brown Christmas is only 80 minutes long, and the first intermission comes at 25 minutes.

Although the cast of children extends to 10, including Shermy (Ryan Dunn) and Violet (Gretchen Martino), who slid to the sidelines over the years, the central challenger to Charlie Brown’s well-being and sense of self is still sharp-fanged Lucy. In casting these roles director Jonathan David Martin draws on two strong players with excellent records.

As Lucy, Carleena Manzi has been a standout in shows at Le Moyne College, from which she has just graduated, and has been highly visible in a variety of roles in different companies like Central New York Playhouse. Her Lucy’s psychiatric advice can draw blood. 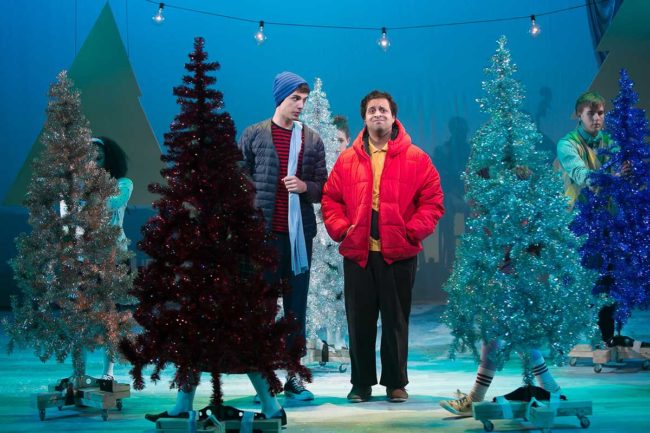 Redhouse veteran Maxwel Anderson takes on the more demanding role of Charlie. Last seen in Six Degrees of Separation, Anderson brings phenomenal credits, including leads in Shakespeare and operatic productions such as the comic Die Fledermaus. He has complete control over Charlie’s evanescent tone. The character may be frequently frustrated (“Oh, rats!”) and laughable, but these must never occlude his fundamental pathos. Children in the audience can never abandon him.

The show’s scene-stealer, of course, is Snoopy. Charlie, while drawn to look like a fellow art student, is the character Schulz dreaded that he might be. Snoopy, all confidence and élan, was the character he aspired to be: Joe Cool.

Imported for this occasion is Toyko-born mime Mariko Iwasa, who has been working for the Clown School at Ringling Brothers. Along with the usual mime tricks, Iwasa also does all the show business dances, including tap. Choreographer Stephfond Brunson pushes her to the limits, with visual confections that may be unique to her repertory. With all the nimbleness of a gymnast, Iwasa can also appear to take flight.

The plot has the Peanuts gang wanting to put on a Christmas show (Lucy’s idea), and Charlie will be the director. This gives attention to other members of the company, such as Schroeder (Napat Mingkwanyuen, the only Equity player). Audiences hoping to find favorites, like the blanket-clutching Linus (a tall Joseph Buck), slovenly Pig Pen (Ari Cummings), forthright Frieda (Makyra Alexander), Peppermint Patty (Chelsea Lembo), and Charlie’s acerbic sister Sally (Addy Whitener), will not be disappointed.

Extra time is taken up by traditional music like “Silent Night” and “Come All Ye Faithful,” led by Thai-born Mingkwanyuen, who was memorable as the Prince in the Redhouse’s The Little Mermaid.

Over at Central New York Playhouse, the familiar Miracle on 34th Street runs through Dec. 22. Thanks to the continuing legacy of the 1947 movie, prospective audiences already know what to expect. Yet there are formidable directorial challenges with such film-to-stage transitions. The movie camera can flit all over the place, whereas live action has to perform within narrow confines.

Director Bella Calabria starts out with strong leads, including Syracuse New Times Syracuse Area Live Theater (SALT) winner Tom Minion as Kris Kringle with his own fluffy beard, and red-haired Korrie Taylor in the Maureen O’Hara part of single mom Doris. A drunken Macy’s Santa (Phil Brady) is disgracing his costume, and Minion’s Kringle restores dignity, without excessive bonhomie or any imitation of Edmund Gwenn from the movie. He listens to children and does not condescend to them.

Korrie Taylor’s Doris must navigate a longer arc, as she initially rejects Kris Kringle and all his claims. High marks also for frequent music director-turned-actor Abel Searor as Fred Gayley (the John Payne part), who is initially an unobtrusive neighbor but shows his quiet mettle in the courtroom scene. 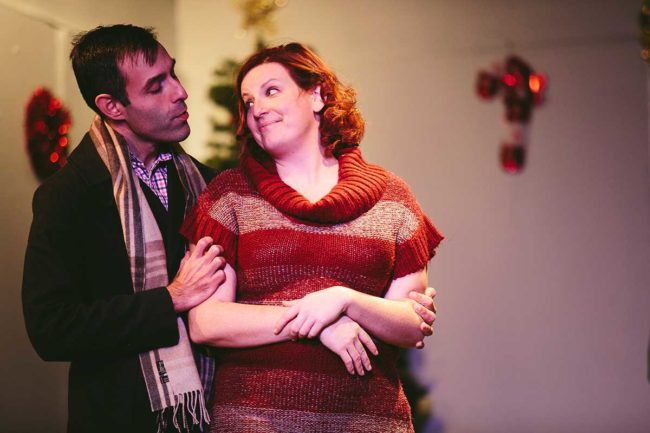 Several new faces acquit themselves well while appearing for only a few moments. Jim Molloy as the Thomas Mitchell-esque Judge Harper may find himself in demand to play gents of a certain age. And James Sharples as Bloomingdale wins the prize for the most impressive walk-on debut of the season.

Calabria moves the action forward to the present, even though the film’s action in 1947 allows that a Dutch girl might have recently left war-torn Europe. Gimbels’ department store is long gone so that Macy’s rival is now improbably Bloomingdale’s, 24 blocks north.

Updating also flips the gender of several characters, outwardly a good idea as there are 34 speaking roles and most companies have a surplus of female talent. Only some scenes come out differently. The imperious psychiatrist, played in the film by a stuffed-shirt Porter Hall, is now portrayed by diminutive, anxiety-ridden Christa Wirth. We don’t cheer when she’s humiliated and almost wish she could have a second chance.

The director thanks her fiancé Christopher Lupia, one of the company’s most versatile players, for designing and building the set. And an act of love it is, with trapdoors, and both sliding and fallout panels. The set solves some problems with the rapid scene changes, but not all of them. The trial scene, among others, still clunks along, even with actor Molloy’s authority.

As is fitting with a Christmas production, there are quite a few youngsters in the cast, including a previously unseen quartet of Elves who retell a classic Abbott and Costello routine. Too many supporting players do not project well to the second row, yet Amelia Frick scores as Doris’ young daughter, along with Tone Merrick and Paul Cayen as the two sharp postal workers who speak up and save the day.