Autobiographical pearls for the stage

“All art is autobiographical,” said movie director Federico Fellini. “The pearl is the oyster’s autobiography.” Rachel Lampert, artistic director of Ithaca’s Kitchen Theatre Company, has been propagating autobiographical pearls for the stage for some time.

The Tea Comes Last was her one-woman show about staging West Side Story in China. In The Angle of the Sun, all identities were obscured but the actress in the lead, short with dark, curly hair, looked like a young version of Lampert. With the world premiere of Count Me In, Lampert moves into Fellini’s 8 ½ territory. She re-examines episodes from her past, with some characters fictionalized while other figures from life are the actual ones seen on stage. Lampert appears as herself, both then and now.

The occasion for this voyage through the past is an invitation to attend a 50th high school reunion. In 1965, at the precocious age of 16, Lampert graduated from Brooklyn’s Midwood High School. With a substantially motivated, Jewish population, Midwood was a competitive place. When students were vying to be valedictorian, their parents brought attorneys to meet with the principal.

Never a cheerleader or even salutatorian, Lampert nonetheless had directed student shows and was widely known. And because she was a dancer as a teen, the reunion team wants her to perform updates of what she did then.

This poses two questions. Can the 60-ish Lampert, who does not cut the same silhouette as her teenage self, perform in public doing the same steps she did five decades earlier? And more importantly, has her life been filled with the kinds of triumphs that will allow her to face those long-ago, nearly forgotten classmates, now preening about their worldly accomplishments and affluence?

Because Count Me In is generous with exposition, it is not necessary to have any previous knowledge of playwright Lampert to be involved in the play’s tensions or to celebrate its joys. Her Kitchen Theatre, of which she has been head for 16 years, might be prominent on the Ithaca cultural scene, but she never cites it in Count Me In. She does allude to husband David Squires, the actuary who brought Lampert to upstate New York two decades ago. Squires gamely plays himself in brief scenes with short speeches. The past that Lampert prefers to recall is when she ran her own modern ballet company from 1975 to 1992. 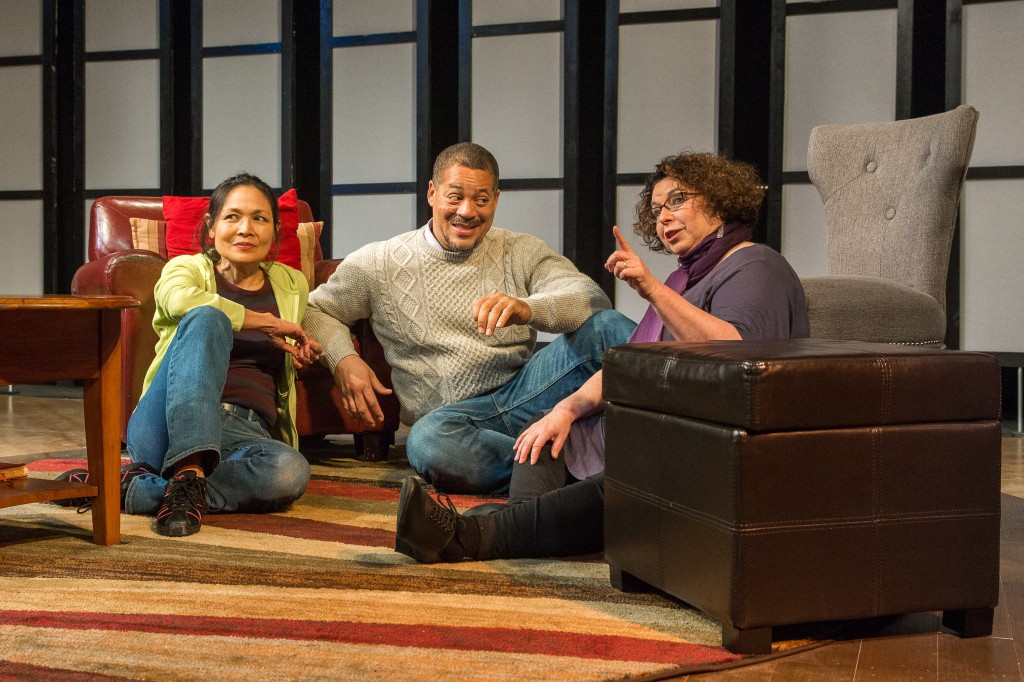 The creation of the National Endowment for the Arts, not coincidentally also in 1965, included the Dance Touring Program. This was designed to take expressive, modern dance out to the people. Lampert’s group visited regions where no one had ever heard of Mikhail Fokine or José Limón, places like the Upper Peninsula of Michigan and Oklahoma. Finding an audience for such fare was one question; facing the hostility of townies and cops after hours was another.

Much dialogue puts Lampert’s character beside her former dancers, a trim Asian woman, Leda (Lydia Gaston), and a witty, charismatic black man, Sam (Keith Pillow). Gaston, a Filipina despite her Anglo name, is the same person who traveled with the Lampert company 30 years ago. Sam, we realize quickly, is a fictionalized representation of Stephen Nunley, earlier a traveling dancer, who continues with Lampert as managing director of the Kitchen. He even gives the curtain speech for the performance. Metaphysically, it is disconcerting to see the person and his artistic doppelganger in such close proximity. But Nunley has nothing to complain about: Sam gets most of the best lines.

At stage right Lampert the character is pursuing her past via a different route. She conjures up her high school dance partner Jorge (suave Tucker Davis), a Puerto Rican boy who takes her through the waltz, swing and tango. These are workouts, but the mature Lampert has plenty of breath for her lines.

An even greater act of conjuring is bringing back the much-loved dancer Toby (Avery Sobczak), who died 25 years previously. His fleeting apparition behind scenic designer Tyler M. Perry’s rotating panels is director Emily Jackson’s most startling touch. Larry Pressgrove’s original music for Toby’s return, the multi-meaning “It’s Time,” is the high point of Rachel’s quest for an answer about whether to attend the Midwood reunion.

Opera Uproar in a Fun Farce: Lend Me a Tenor
A Little Night Music: Isn’t it Bliss?
To Top