Dustin Czarny’s Central New York Playhouse, the company in a former retail space in Shoppingtown Mall, has spent much of the last two years busting out the walls. Several shows, including Spamalot, The Wild Party and The Laramie Project, had to be shoehorned onto the floorboards.

Yet farce loves tight spaces. With Lend Me a Tenor, director Czarny exploits the intimate space. Mistaken identity is quickened, slammed doors come faster, and bed-hopping is lickety-split, all calculated to gin up the laughs.

Although it premiered in the first Bush administration, Ken Ludwig’s Lend Me a Tenor feels a bit like a 1930s-era screwball comedy, the era in which it is set. To a degree it pays homage to the brilliance of playwright George S. Kaufman, whose evergreen confections never wear out. His You Can’t Take It With You is a hot ticket in New York City this very week.

As with Kaufman, Tenor’s targets are the vanity and fatuousness of the privileged classes, but Ludwig’s gags are generally superior. The playwright has thrown in a dash of Marx Brothers irreverence, built on some sturdy comic devices, like mistaken identity, that have been around as long as there has been stage comedy.

At issue is celebrity worship in the sticks. The world’ greatest tenor, Tito Morelli (Zach Siracuse), is about to appear in Verdi’s Otello at the Cleveland Grand Opera. After arriving late, he has a spat with his bitchy wife Maria (Emily K. Buss), then disappears and might even be dead.

This drives the company manager Henry Saunders (Jim Magnarelli) into coronary country. He’s so desperate that he’s willing to go along with the harebrained scheme of having his nebbish assistant Max (Vincent J. Randazzo), who claims to know every note of the score by heart, disguise himself as Morelli. The role is sung in blackface, and in this production Otello sports a bigger Afro than seen in any reggae band. Max is also motivated by the sight of Saunders’ gorgeous daughter Maggie (Katie DeFerio), who is first seen swooning over a recording of Morelli. Impersonating the tenor gives Max at least a few moments with her.

Although all eight roles in Tenor come with built-in opportunities for scene-stealing, Saunders and Max carry the most freight. Jim Magnarelli fully captures Saunders’ explosive indignation, and whacks every one of Ludwig’s gags out of the park. Vincent Randazzo gives us a much shyer Max than the eager hustler seen in other productions. A Le Moyne College senior and a veteran of distinguished productions there (A Tempest, Around the World in 80 Days), Randazzo starts with two strong assets: He speaks Italian and sings credibly as a tenor. 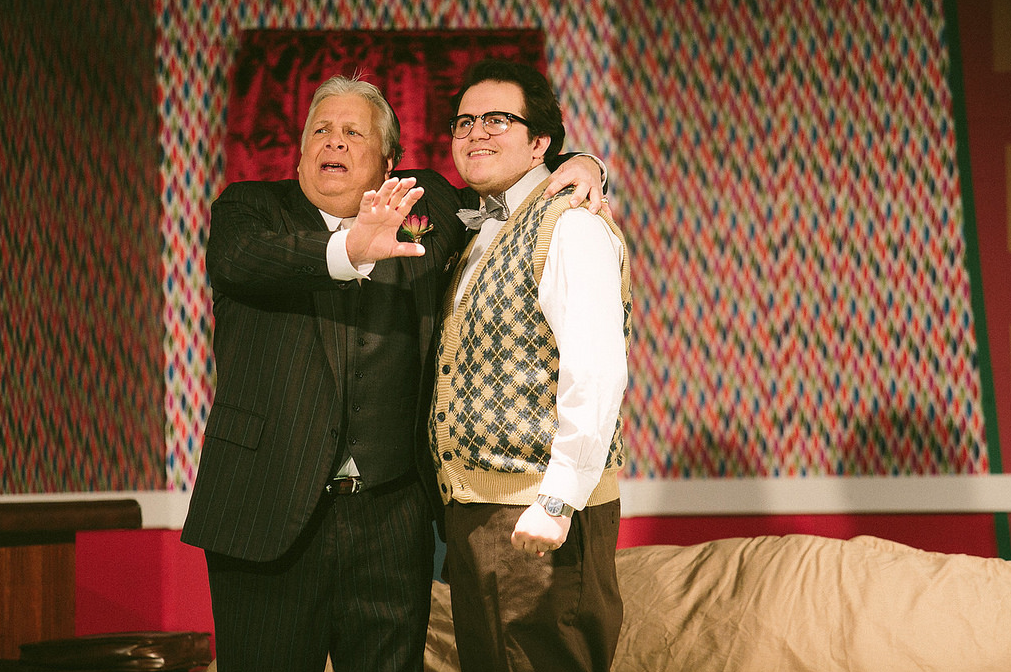 Jim Magnarelli and Vincent J. Randazzo in Lend Me a Tenor at CNY Playhouse (Photo by: Amelia Bemish)

A running device of the farce is that the more a character is awed by Morelli’s celebrityhood, the more humiliation he or she will endure. In this, the top scene-stealer is Ty Marshal’s bellhop, a terrier of vanity in tight, high-water pants who thinks he should take over Morelli’s role instead of Max. (Ty Marshal is the manager of digital media at the Syracuse New Times).

Right there with him is Saunders’ bejeweled wife Julia (Marcia Mele), whom he compares with the Chrysler Building. Julia might have started out as a variant of the haughty, clueless dowager once played by Margaret Dumont, but director Czarny and Mele undermine that with a deep streak of hornyness.

Not that the younger women lack libido. Saunders’ daughter Maggie has already signaled that she’s an eager operatic groupie, and when Max’s impersonation works, he appears ready to use the Verdi score to score. But as is usual in farce, all attempted sexual liaisons must be interrupted, preferably with the damsel left in an advanced state of undress. What we did not see coming is that the soprano diva in Otello, lovely Diana (Natalie Wilson), is also smitten with Max’s performance, and is ready to slip out of everything uncomfortable for a more intimate duet.

Set designer Navroz Dabu neatly divides the stage in half with a cutaway wall separating two hotel rooms, with one slamming door between them. To make us forget that they are actually only a few feet between the spaces, he plasters the walls of each with vibrant, art deco wallpaper. The effect is transporting, back to 1934, along with Wendy Pitoniak’s period costumes, the trouser legs of all but one extending to the floor.

A Dozen Faces, Thousands of Personalities
Rachel Lampert: The Way She Was
To Top