Trying something new is all fun and games until this new hobby becomes a passion, but the fun and games never end. For Don’t Feed the Actors (DFtA), Central New York’s longest running improv troupe, creating fun is the name of the game, and the fun is a month-to-month party in The Central New York Playhouse.

Practically everyone has heard of improv. Either Drew Carey immediately comes to mind, or Whose Line is it Anyway?, which is commonly referred to as “that show on TV where they make things up.” The British-born and U.S.-adopted improvisational comedy show, if it doesn’t have a place in your hearts, has planted a seed in your mind — you’ve heard of it. In the late 1980’s, when the British show became a hit, our favorite Americans — Colin Mochrie, Greg Proops, Brad Sherwood, Ryan Stiles — were featured often; Wayne Brady did make a few appearances, but wasn’t a regular cast member until the 1998 update.

I enjoyed the Drew Carey-hosted show as much as watching reruns of the British version. When I saw Colin and Brad at Oneonta State, they convinced me that they were making stuff up on the spot. However, I didn’t think anything of improv until January 2013, when I took classes and joined Syracuse Improv Collective. When I saw my first Don’t Feed the Actors show that February, volunteering and jumping on stage to create sound effects, I knew a few more of my life’s puzzle pieces were fit into place.

This past Friday and Saturday made for another improv-filled weekend at the Central New York Playhouse with the Syracuse Improv Collective’s Bank Show and DFtA’s first show of their eighth season.

There is a familiar camaraderie with the staff and performers of The CNY Playhouse. Even when they are not performing or directly involved with a production, board members and/or performers and/or volunteers can be found to help out. The gentlemen that were performing that night have all starred in many of the monthly stage productions in the theater, and “Lend Me A Tenor“ will be featured Jan. 9 to 24.

The cast was hanging outside of The CNY Playhouse Saturday evening, “warming up” so to speak. They joked with patrons, bantered with each other, and some took some shots at themselves to get their blood flowing and minds revving. As Dustin Czarny, Artistic Director of the venue and DFtA co-founder, worked the reservations and seating, the rest of the cast interacted and helped seat patrons. Justin Polly, Eric Feldstein, Gerrit Vander Werff, and Best of Syracuse 2014 Winner Doug Rougeux of the interchanging DFtA roster were to hit the stage that night. Greg Hipius, the host of the two-hour show, was taking the night off for fatherhood reasons — he and his wife recently became parents. 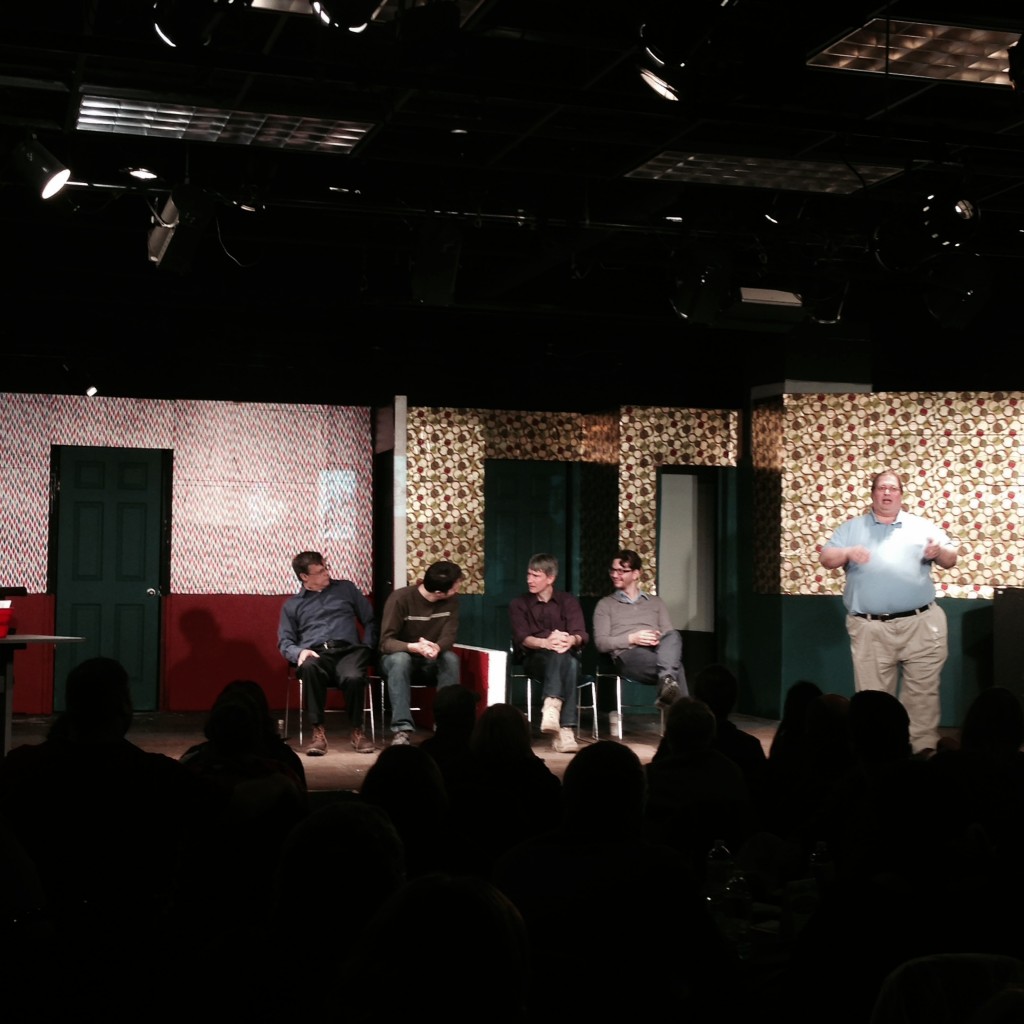 “[Don’t Feed the Actors] are comedians that do improv rather than an improv troupe that does classes,” said Czarny, clarifying the definition of the troupe. The troupe officially began in 2008, starting as friends wanting to get together and have fun, performing improv. The founding members and friends still perform with the troupe today. None of the performers have formal improv training except Justin, who had taken classes at The Second City in 2011. The audiences, their interactions and reactions, add to the excitement of performing. As it is, a returning audience member will never see the same show twice; this excitement keeps the newcomer returning for more. Not only do the performers want to have fun, they are performing for the audience.

Improv is also for lovers. According to the troupe’s website, Dustin proposed to his wife, Heather, during a practice. A couple that had entered the Playhouse on Saturday let the cast know that one year ago they had their first date at a DFtA improv show. During the game, “Fill in the Blank,” instead of asking for volunteers from the audience, he zeroed in on the couple, who graciously jumped on stage and helped out the improvisers, feeding them words to move the conversation along.

The number of shows under the troupe’s belt is in the triple digits. When asked how often they practice, Czarny explained they get together the Saturday before each show. Rogeaux added, “We have performed so long together, and the concept of the games come easily.” It’s all about prepping the set list for each show, and the troupe has approximately 40 games they play in their catalog, but they don’t limit themselves. “We stopped prepping specifics to [focus on] guidance,” said Czarny.

When asked what games they didn’t enjoy, Feldstein quickly chimed in: “Hoedown” (smiling, but with a quick disappointing shake of his head). Others agreed that this song-based game didn’t have that pizzazz. Its close relative is the Irish Drinking Song, which — by assumption — is the “cool uncle.” When asked about the troupe’s favorite games, “Moving People” came to mind, a game where two audience members are asked to move the actors around the stage. “Fill in the Blanks” and “Party Quirks” are also favorites that were brought up. A game that DFtA had sewn together from a variety of others is “Excuses,” where one performer steps outside as the audience suggest three excuses why this character was late to work. One person plays the interrogating boss, and the rest of the cast plays charades to help their coworker come up with the specifics (and unbeknownst to the boss). Although Don’t Feed the Actors specializes in short-form improv, creating new games and tweaking old ones to incorporate more interaction and story bridges into long form.

The next dinner theater show is Saturday, Feb. 7, at The Central New York Playhouse. Cathy’s Corner Cafe provides the ziti, meatballs, rolls and salad. The dinner begins at 6:30 p.m., and combination tickets are $25. The improv show begins at 8 p.m., tickets are $12.