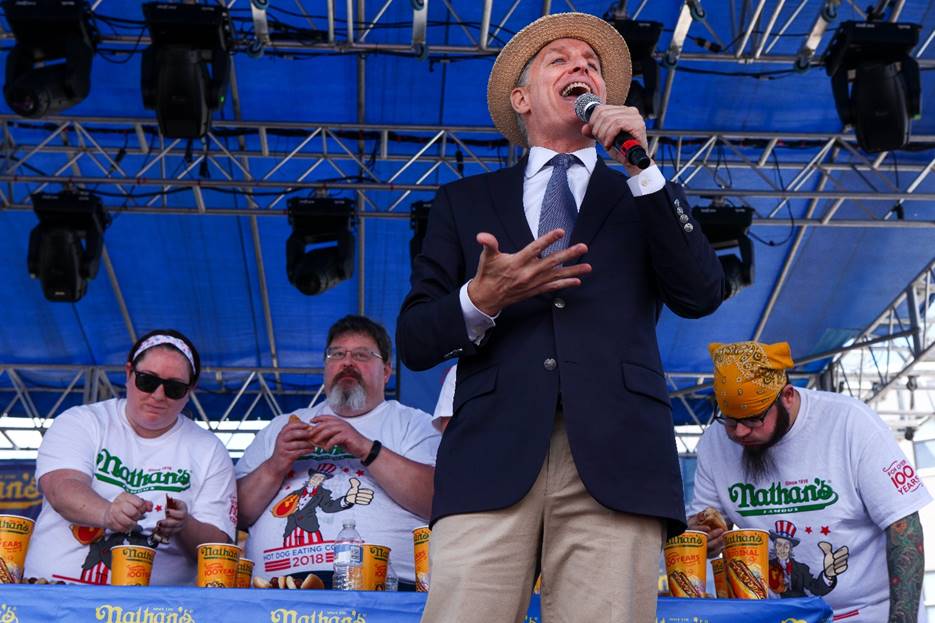 We might be known as the Salt City (and we’ve got the salt potatoes to prove it) yet Syracuse could very easily adopt a new nickname as Wienerama. After all, the Hofmann Sausage Company has been a mainstay since 1879, with their franks and coneys up for grabs at Heid’s of Liverpool and Salt City Dogs in North Syracuse. And who can forget the late Bob Luongo, aka Bob Barker, whose portable food stand was hot-doggin’ all over town at summertime events.

That’s why it makes perfect sense that a qualifying round of the Nathan’s Famous Hot Dog Eating Contest will make its annual visit during this weekend’s Taste of Syracuse event at downtown’s Clinton Square. The qualifier has been in Syracuse since 2015, according to Adriana Ball, who handles publicity for the event with Shea Communications in New York City. And the crowd size has mushroomed every year for this chow-down showdown, which takes place Saturday, June 8, 1:45 p.m.

The gluttonous goal, of course, is a potential date with the Nathan’s Famous Fourth of July International Hot Dog Eating Contest, to be held July 4 at Brooklyn’s Coney Island. The winner of the Independence Day blowout will receive $10,000 and the coveted Mustard Yellow Belt. 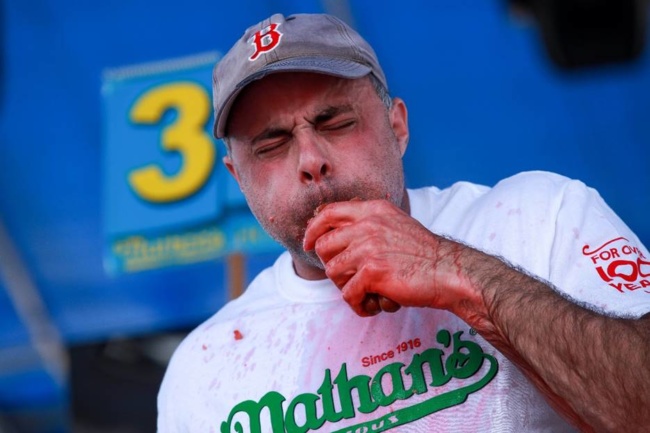 The top male and female finishers for the Syracuse event will face reigning champs such as Joey “Jaws” Chestnut and Miki Sudo, and neither one are slouches when it comes to wolfing wienies. Chestnut consumed 74 hot dogs and buns to set a new world record last year, while Sudo chomped 37 dogs and buns within 10 minutes in 2018.

“We are seeking new talent in Syracuse to represent our nation on the most patriotic day of the year,” declared Phil McCann, senior director of marketing for Nathan’s Famous, in a press release.

While the Coney Island grand finale has lured upward of 35,000 oglers, as well as a nationwide ESPN audience, the Syracuse qualifier provides a neat preview of the Independence Day main event. A grillmaster from the Nathan’s team cooks the hot dogs on a flat-top grill. The competitors are allowed to consume water or other beverages, with some eaters dunking their dogs into their drinks, presumably for easier lubrication. Curiously, the contestants shy from adding condiments, with nary a mustard or ketchup bottle on the tables.

While the munchers go for the gastronomic gusto, lively entertainment is provided by master of ceremonies George Shea. Wearing a straw boater hat and supplying plenty of rat-a-tat color commentary throughout the 10-minute contest, Shea constantly darts about the stage to keep the patter flowing even as the contestants begin their inevitable consumption slowdown.

Shea’s Major League Eating company has played a major role in publicizing the Nathan’s contests for more than two decades. And when he delivers hilarious descriptions such as “the Tallahassee two-hand is an eating method so dangerous and difficult to master that it was abandoned in the 1930s,” Shea obviously relishes his role as an old-school showman.

Pat Hogan looks to recapture his former Common Council seat
Franklin Graham Q&A: Do you want to have a relationship with God?
To Top