The PBS children’s series Sesame Street, launched in 1969, was an urban oasis where everyone got along, regardless of race or class, and every child could see himself or herself as special and could do anything. Every dream was worth pursuing.

Avenue Q, we learn quickly, represents a low-rent thoroughfare in some outer borough where all that hope and aspiration goes to die. Enter the clean-cut American boy named Princeton (Michael Roach), who has been analyzing great literature for four years. In his plaintive opening number he asks, “What Do You Do With a B.A. in English?”

The four things that most people know about Avenue Q, the season finale from the Syracuse University Drama Department, are all true.

1. The premise is rooted in a shared knowledge of Sesame Street.

2. Eleven hand-held puppets mix it up with three live-action characters.

3. Two puppets have an extended session of X-rated love-making.

Three people put Avenue Q together: composer-lyricist Jeff Marx, who had worked for Sesame Street before entering into collaboration; Robert Lopez, who has since written music and lyrics for the Disney cartoon Frozen; and Jeff Whitty, who wrote the book, and brought the other two to the project. United they have the authentic sound, a jaunty self-assurance no matter what the subject, even the self-loathing “It Sucks to be Me.”

Yet Avenue Q is not a spoof or put-down of Sesame Street but a dialogue with it. Take the puppets, for instance. Viewers learn quickly that on PBS they are allowed to express emotions more volubly than flesh-and-blood characters. Thus, a craving for sweets is exaggerated into the Cookie Monster.

Even though the characters in Avenue Q should be a few years out of college, these are splendid roles for undergraduates. Director Brian Cimmet has made prudent use of the sharp young talents the musical theater program has gained from its highly selective admissions.

As Princeton, the nominal lead, Michael Roach commands the stage in numbers like “Purpose.” In search of an apartment, he has trudged all the way from Avenue A up to Q, where he meets Kate Monster (Madie Polyak), kin of porn-loving Trekkie and part of a discriminated-against group. Musically, Kate is more prominent than Princeton, winning in solos like, “There’s a Fine, Fine Line.”

Princeton soon meets Rod and Nicky as well as a cross-cultural, full-bodied couple thinking of getting married. Brian (Cheech Manohar) is a frustrated, would-be comedian who can’t stumble his way through a one-liner. He’s been living with Christmas Eve (Delphi Borich), a Japanese immigrant who describes herself as a therapist. Given her ferocious tiger mom demeanor, we’re not surprised she doesn’t have any patients. An effervescent scene-stealer, Borich refuses to let Christmas be the one permissible stereotype in the show and so runs away with her big number, “The More You Ruv Someone,” with Kate Monster. 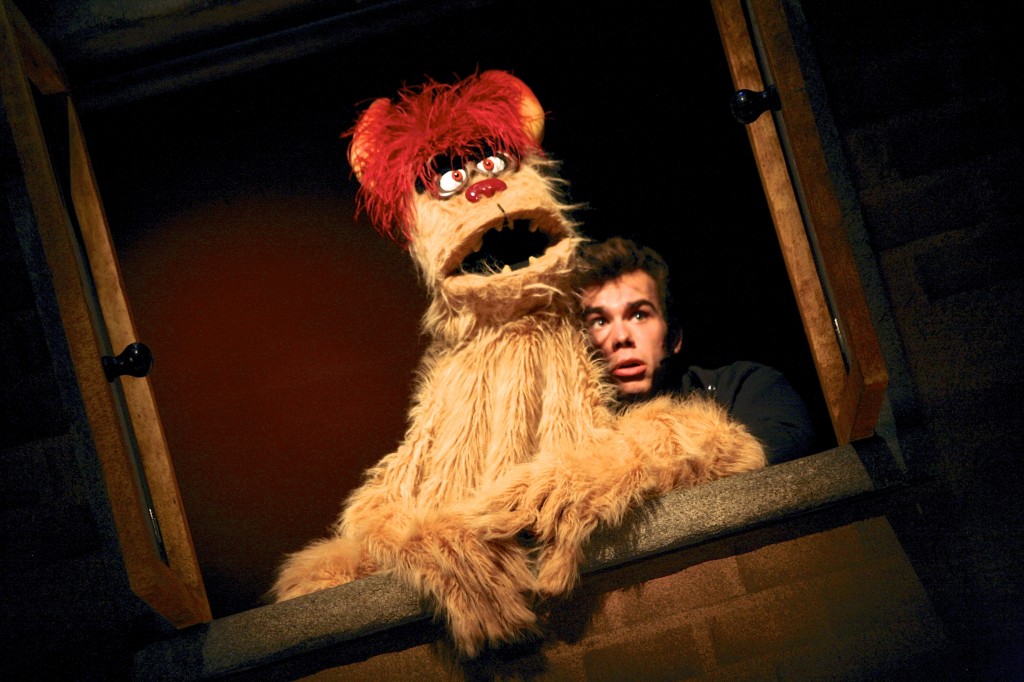 Not that anyone can upstage Lucy the Slut ( Melissa Beaird), who shows up when Brian’s jokes are falling flat in a club tryout and fires up the crowd with her solo, “Special.” Beaird, incidentally rather willow, is among the best puppet handlers in the cast, notably with Lucy’s prominent bosom. In high definition graphics, we see pulsing outlines of those bosoms when Lucy is hospitalized.

The toughest role to fill is that of the superintendent at Avenue Q’s run-down apartment, Gary Coleman (Emma Roos). A one-time charming and promising child actor who floundered as an adult, the real Coleman was still alive when Avenue Q opened and was understandably chagrined at his portrayal. Then again, his ignominy embodies the show’s themes. The Nordic-appearing Roos soldiers on, never acknowledging that she is cast against type. She jettisons the shrug-shouldered pathos given by some African-American players.

Director Cimmet calls up an excellent, professional-sounding ensemble of seven for this collegiate production.
Avenue Q continues this week with performances on Wednesday, April 29, through Saturday, May 2, 8 p.m., and Sunday, May 3, 2 p.m., at the Syracuse Stage complex, 820 E. Genesee St. The show runs through May 9. For details, dial 443-3275.