David Mamet did not become America’s most imitated playwright by depicting well-spoken Galahads. His best and most characteristic work, Glengarry Glen Ross, is the rhetorical equivalent of Chuck Palahniuk’s Fight Club.

The issue is not just winning, or what real estate men call “closing,” that is, getting the sucker to sign over his money and close the deal. Instead, Glengarry Glen Ross is about how verbal combat is played. We start with bullying and intimidation, shouting over the other speaker, refusing to listen to him, and, above all, interrupting him. Prestige flows toward the speaker with the greatest sense of style. 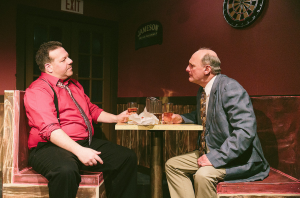 Presiding over this cauldron of testosterone at the Central New York Playhouse might seem anomalous for still-new director Kasey McHale. As an actor she is often seen as a smiling young woman, like Marcy in I Love You Because. Yet in her program note she speaks of having studied Mamet since she was in college (not so long ago). Evidence of her command comes often, most spectacularly in the restaurant scene when bullish David Moss (Jim Uva) harangues the weaker salesman, George Aranow (Keith Arlington), into stealing valuable sales leads from the office to sell to a rival firm. It’s breathless and breathtaking.

We never see the Glengarry of the title, which, despite a name evocative of the Scottish Highlands, sounds like a swamp in Florida. Four salesmen are working out of a dingy office in 1983 Chicago. No computers. No cell phones. All talk is face to face. Bold writing on the chalkboard proclaims their rankings. Moss, ranked second, and Aaranow, third, might have a wide gap between them but not as deep as the two at either end of the list: high-flying No. 1, Rick Roma (Nathan Faudree), and Shelley Levene (Jack Sherman), at the bottom with a score of zero. 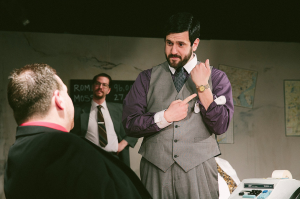 Two other men in the office define the mood and the tone. In the opening scene choleric martinet Blake (Dan Rowlands) gives the sales talk from hell, which tells the men if they can be the top closer there’s a gold Cadillac in the offing. Otherwise, their careers are over. Company regular Rowlands succeeds in scaring the bejesus out of the quartet, but because the character was written for the movie version, but added here, he has no further role to play on stage.

Cool-headed office manager John Williamson (Justin Polly) does not have to go into the field with prospects, but uses the same number of expletives as the salesmen. His power comes from assigning the precious leads, which will go to top performers. The salesman losing these is reduced to cold calls, knocking on doors like a beggar.

Faudree’s Roma, dressed in a cream-colored disco suit, arrives too late to listen to Blake’s dressing down. His rakish swagger contrasts sharply with Moss’ hard-bitten jealousy. It’s not that we’d actually like to buy a property from Roma, but as top dog he has a sense of irony and is rewarded by the playwright with many of Glengarry’s best lines. Roma also allows Faudree one of his best outings of recent years.

At the far end of the sales and sartorial roster is hapless Shelly Levene, dressed in clashing blue jacket and brown trousers for his entrance. In the second act when he thinks he has regained his sales mojo, he turns up in a bright polyester golf outfit guaranteed to deny him entrance to country clubs and many franchise restaurants.

Jack Sherman, an actor long active in Auburn, underscores Levene’s contradictions and complexities. Our sympathy for his rude treatment, especially from Moss, is short-lived. When he thinks he has made one big closing, he oozes with smarmy self-congratulation that Rick Roma never exhibits. His stumbling attempts to curse like the big boys are wince-making.

Although the rhythm and authenticity of Mamet’s tough-guy language leaves some commentators swooning, Glengarry Glen Ross also includes, curiously, a scene-stealing role for a player who barely speaks a line. It’s red-faced, bald James Lingk (Simon Moody), who squirms in agony when he tries to wriggle out of a closing with the ultra-persuasive Roma. He fears his wife more than Roma. Perhaps it’s a female director’s joke on a stage awash with Y chromosomes.

Glengarry Glen Ross continues with performances on Thursday, April 23, through Saturday, April 25, 8 p.m., and Sunday, April 26, 2 p.m., at the Central New York Playhouse in Shoppingtown Mall. The show closes May 2. For details, dial 885-8960.