God of Carnage, Yasmina Reza’s much-lauded black comedy, is not about God or religion at all. It does, however, have much to do with blood-letting combat.

As this Covey Theatre Company production opens, two affluent couples meet in a chic Brooklyn loft to talk about the fight their boys had in a park. Benjamin knocked out two of Henry’s teeth. Dental and medical expenses will be covered, but there are lingering prickly questions, like how the thing got started and how everyone is going to move on.

Henry’s parents, Michael (Mark Cole) and Veronica (Moe Harrington), are the hosts. Michael is slow to report on the family income, a warehouse filled with domestic hardware like doorknobs and toilet fixtures. Although Veronica has festooned the coffee table with expensive books, she’s almost “Aw shucks” in admitting that she has worked on a book about Darfur. Their apartment is decorated with tribal masks, as allusions to Africa keep coming up in the dialogue.

With Alan (Robb Sharpe) and Annette (Aubry Ludington Panek), however, dissonance is prominent from the get-go. Annette, dressed to kill, announces that she is in wealth management. Sporting an ill-fitting suit implying that he should be waiting for a bus, Alan is too distracted to be bothered with making an impression. He withdraws from the conversation frequently to bark on his cell phone. Sounds as though he is working on a pharmaceutical deal in which human suffering will yield him huge profits. So why should he be bothered with a playground dispute?

As with Yasmina Reza’s Art, in which three guys reveal their inner selves while arguing over a white-on-white painting, all four characters in Carnage turn out to be quite different from and more complex than our first impressions of them. Most blue-state audiences are prepared to dislike Alan for his bad manners and for lines like, “I’m no liberal: I’m a Neanderthal.” Significantly, he announces the title of the play and explains how it links what happened in the park to what is taking place in the apartment.

This is Reza’s snare. Alan, taken literally, leads to a facile summary of the play. Kids fight in the park. Adults fight in the apartment. We’re all savages. Civilization is a sham. The end. Such an approach is akin to thinking Citizen Kane is about yearning for a lost sled. Alan may have the broadest view of what has happened– broken teeth are certainly unfortunate but not Armageddon –but he’s too reductive. 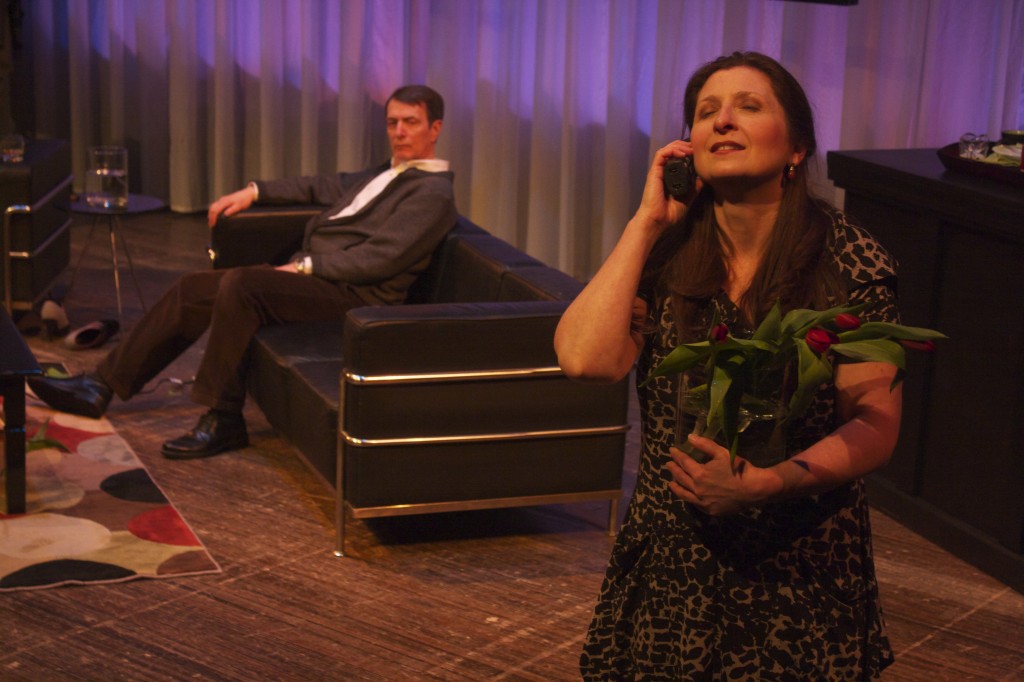 God of Carnage is not simple but rather paradoxical. Civility and culture are not merely evanescent veneers but rather parts of the mix that allow us to continue. Our natures are in flux. Benign Veronica might proclaim that she does not “see the point of existence without some kind of moral conception of the world.” Until she’s crossed. All four characters wrestle with their better angels as with their demons.

All this makes for nasty fun under Garrett Heater’s tight, focused direction. Take the excruciating breaks in the conversation in the first scene. These are not Pinteresque but more like shark fins in the water.

For Heater’s casting calls, what’s most interesting is that each actor departs from familiar personae established in other roles, as everyone breaks type. Mark Cole is initially almost unrecognizable as the bland, bourgeois Michael. In a dozen small gestures, like the self-amused cleaning up of the coffee table or the mania of touching a hamster, Cole signals a more bizarre subtext that even his wife might not have seen.

Wider swings of mood are written into Veronica’s character, who starts sounding like the playwright’s spokeswoman and closest to the presumed sentiments of the audience. Yet Moe Harrington, like a flying Wallenda, takes her into the dark. The songbird of The Unsinkable Molly Brown has never before given us such a bitch.

Robb Sharpe also shapes a wholly unprecedented character, the disheveled tyrant. His Alan cares so little about being liked he’s invulnerable, just the guy to ramp up tension. And Aubry Ludington Panek plausibly makes Annette haughtier than some of her lines might imply. Such an interpretation makes all the more effective her inability to keep down the cafoutis, surely bound to be one of the most talked-about scenes all year.
Covey Theatre Company’s God of Carnage concludes with performance on Friday, April 17, 8 p.m., and Sunday, April 19, 2 p.m., at the Mulroy Civic Center’s BeVard Community Room, 411 Montgomery St. Call 420-3729 for details.