A group exhibition featuring more than 20 artists typically has differences and some commonality. That’s certainly the case with Global Issues. Climate Matters. Social Change, the first-ever juried show in ArtRage Gallery’s seven-year history. It includes work by painters, photographers and a videographer, by artists who create prints or etchings. What they share is a propensity for heading down diverse paths, for interpreting familiar themes in a distinctive idiom.

Two artists, for example, both focus on war and peace. Stone Riley’s acrylic references an incident that took place in a remote area of Pakistan, where a Cruise missile aimed at members of a Taliban group killed two women. His work has Cubist touches, as a shadowy figure thrusts a projective shaped like a stake toward a woman’s throat. Images of various body parts are scattered about the canvas’ bottom section.

Paula Everitt’s “We Came to The End,” a monoprint with gouache and graphite, depicts the execution of prisoners kneeling on the ground, with arms tied behind their backs. The print is somewhat faint, helping to communicate a sense of horror. The scene is in the Sudan, a nation plagued first by a long civil war and then by armed conflict between tribal groups in the new country of South Sudan.

Several artists created pieces dealing with the criminal justice system in the United States. Elizabeth Riker’s “Arraignment,” done with paint on plexiglass, shows five figures in ultra-bright orange jumpsuits. The multimedia work is layered and intricate, and the figures seem to glide along the plexiglass. 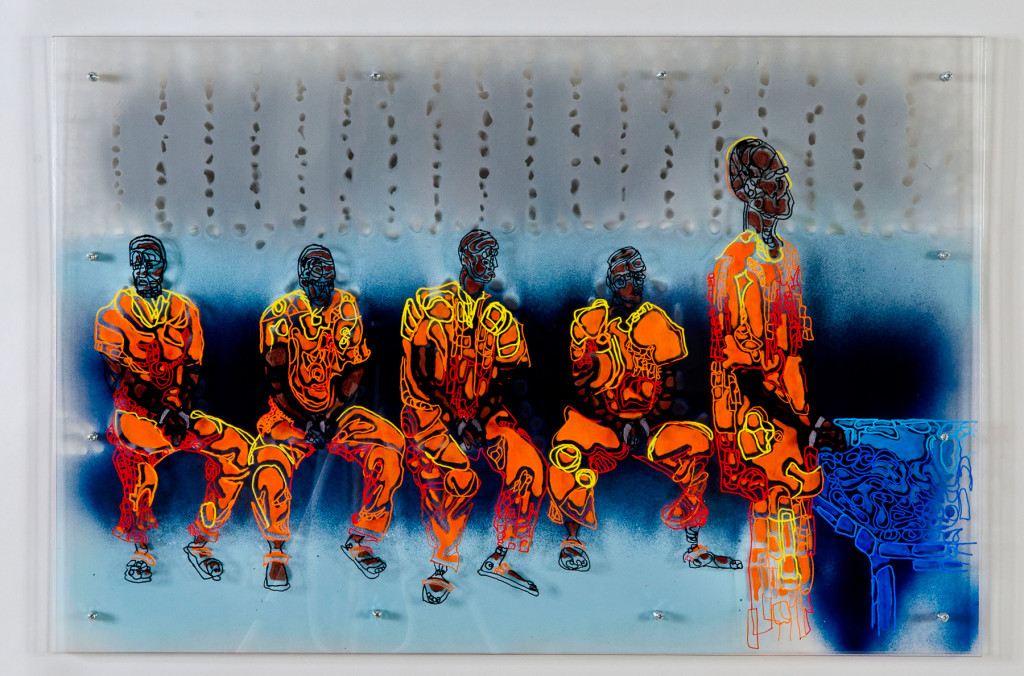 Ruth Keitz and Bobbette Morgan, who have long worked on issues regarding capital punishment in Texas, created a “scrapbook” about people executed in that state. Text, in the form of a newspaper article or typed comments, is juxtaposed with a convicted murderer’s own handwritten comments.

Some comments are philosophical; Ronnie Threadgill writes of going to a better place. On the other hand, Douglas Feldman, convicted of killing two truckers in separate road-rage incidents, says the truckers committed crimes against him and that he acted as their executioner.

Elsewhere, two artists discuss demonstrations. Canadian artist Justin Wayne Smith’s large digital collage combines multiple images of strikers, of people protesting budget cuts or changes in labor laws. Richard Meyers’ oil on linen draws on an Occupy Wall Street rally, focusing on two men, one middle-aged and playing a guitar, the other much younger. The work places the duo close together; in the portrayal of the older man, his right hand fades into the guitar.

Other artists have pieces selected from ongoing bodies of work. Paul Pearce’s digital collage continues his exploration of war and its impact on warriors. The collage combines bullets, a soldier holding a camera and an Auto Magic Picture Gun from TV’s The Mickey Mouse Club. 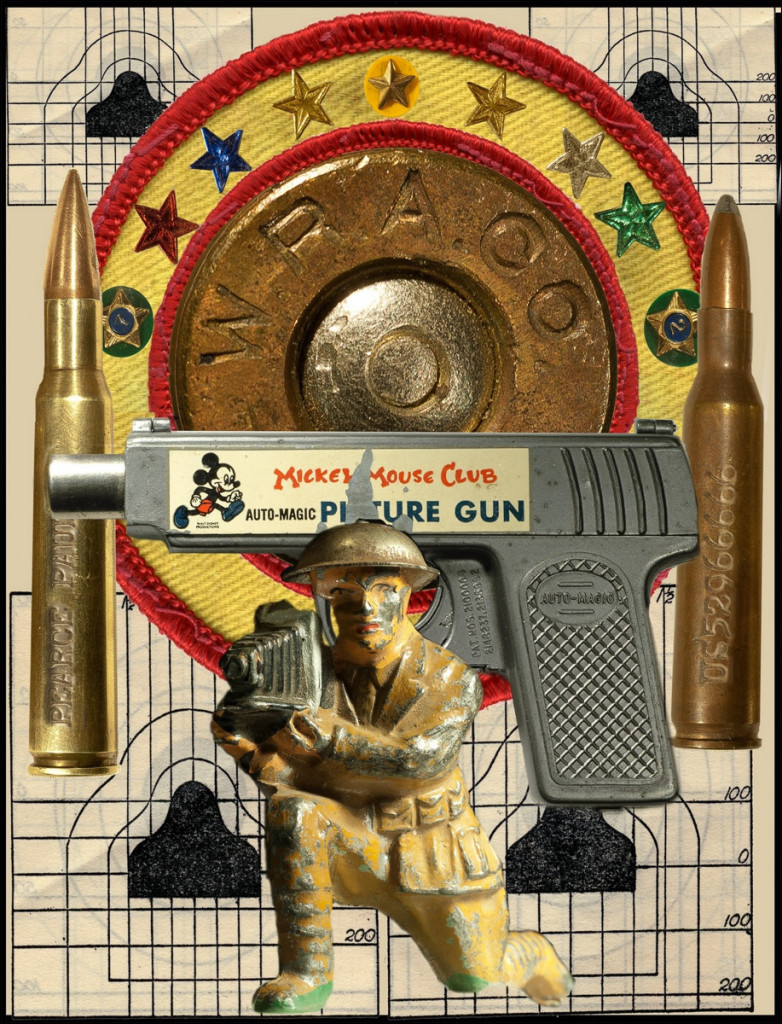 James Skvarch’s “Water Shortage” again demonstrates his ability to create etchings that stand out visually and thematically. It has an absurdist feel, as it positions dozens of boats, some on top of each other, on land. Yet the work calls attention to severe water shortages over much of the world.

Mollie Kellogg’s “You. Me. Us” is one of a series of paintings portraying people in transition, dealing with inner turmoil. While the paintings refer to serious issues, they also have a light side. Kellogg often depicts her subjects with flowers in their hair or in elaborate dress. She typically incorporates bright colors into the paintings.

The exhibition has room for artworks employing different visual strategies. Kathe Harrington’s image depicts a man sleeping on a bench in downtown Syracuse, with a tree seemingly providing some shelter. Ben Altman’s two photos, part of a new project, portray a space he created in his backyard. After measuring a 9-by-60-foot rectangle, he dug a pit five feet deep and added steps and a ramp. The images, which speak to absence and subtraction, are intended to evoke the Holocaust.

Global Issues. Climate Matters. Social Change, on display through Oct. 18 at ArtRage Gallery, 505 Hawley Ave., showcases pieces by 24 artists, 11 from Central New York and the rest from Boston, San Diego and other locales. It succeeds not by following a set format but by being open to varied artworks. This is an auspicious debut for a brand-new type of exhibit at the gallery.

Paul Pearce (represented by “Auto Magic Picture Gun”) and Ben Altman will deliver artists’ talks on Oct. 8 starting at 7 p.m. at ArtRage, which is open Wednesdays through Fridays, 2 to 7 p.m., and Saturdays, noon to 4 p.m. For more information, call 218-5711.