A service to have your driveway plowed with just a few taps on your smartphone.

Just as you finished putting away the shorts and swim trunks, your smartphone tells you there’s a 40% chance of snow on Friday.

Well, thanks to a couple of Syracuse University grads, your aching back no longer has to dread the snowy mornings of doing what so many Central New Yorker’s “love” to do: shovel the driveway.

There’s an app for that!

Back in November of last year, Wills Mahoney and Andrew Englander launched an app called Plowz. Originating in three markets – Syracuse, Rochester, and Buffalo – Plowz is a service to have your driveway plowed with just a few taps on your smartphone.

Users are quoted based on a few quick questions on the scope of their driveway, can upload a photo so service providers can more easily identify the address, are charged via secure credit card when the job is done and get fast, reliable service with a photo of the finished product sent to them immediately. Plow companies also use the app via smartphone and are able to track and pick up jobs on routes they already drive, adding extra and immediate jobs.

Garnering national media attention almost immediately upon launch, Mahoney and Englander quickly decided to scale out to other cities including Minneapolis, Chicago, and Milwaukee – totaling 30 different locations. In short, Plowz was an instant hit. 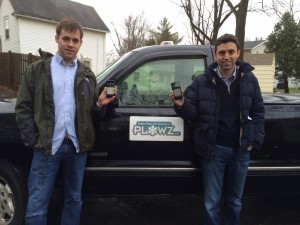 Wills Mahoney owns Express Computer Service – a small, local IT company out of Manlius, NY. One day, his Mother couldn’t get out of her driveway due to the snow and he had a horrible time calling around to get a plow: no one was answering the phone. It was then that he got the idea.

Englander partnered with developers Kris and Andy Minkstein of Lamplighter Labs. Together, they started working on the app to create a smooth system for both users and plow providers.

“One of the cool things about the Plowz app,” said Mahoney, “We know the exact location of our service providers at any given time. Therefore, the closest provider gets the job, creating faster response times for our customers as well.” They’ve even rolled out an ETA function this year, similar to the popular Uber black car service.

“We also pay within 24 hours,” noted Mahoney, “One of the biggest problems providers have is cash flow: hunting down outstanding payments. They just don’t have the time.” With the app, that’s all done automatically via secure credit card connection.

The service also employs a 24 hour call center for a personal touch: a human voice at the end of the line in case customers need anything – a little peace of mind.

The service is not just for smartphone users.

“Older people usually don’t have smartphones,” said Mahoney, “So we’ve opened up web ordering as well; but still encourage people to use the app.”

During last year’s Plowz season, the company also rolled out Mowz, which is – you guessed it – on demand lawn service, which has also seen huge success nationwide.

“Our Minneapolis market has been most successful, along with Raleigh for Mowz; and both Pittsburg and Boston have garnered huge markets. We are definitely past the ‘proof of concept’ stage,” said Mahoney.

“What’s cool about our company,” he said, “Is that some guys out there do all sorts of services but none of them well. We are adding Leavz leaf removal now to Mowz but get asked, ‘Why aren’t you doing Poolz?’ We simply want to nail these two services and do them well before expanding.”

The app is free for consumers and also free to join for providers. The developers collect a small percentage of the cost of the service.

(Plowz & Mowz On Demand Snow Plowing Video from Plowz and Mowz on Vimeo.)

“Customers really appreciate that the provider has to take a picture of the job. For instance, if the homeowner is out of town, it’s proof the job got done,” said Mahoney.

Mahoney noted that in most cases consumers won’t use the service just once, but quickly fall in love with the ease and convenience.

“You can order a Mowz in 30 seconds for the next day – it’s so easy it’s almost addicting,” he said.

Though the target audience is somewhat for the tech savvy, Mahoney’s Mother is not, and he built it for her to use easily as well. In addition to homeowners, many property managers and real estate agents use the service to maintain their real estate, as well as snow birds in Florida checking on their CNY home. There’s also the “husband’s out of town-ers,” the “kids are out of town-ers,” and the Christmas gift-of-Mowz/Plowz customers.

The app boasts general liability and only commercial grade equipment from their providers.

“We find our providers love it because it’s a whole new stream of revenue,” said Mahoney. Providers can pick up extra jobs on their existing route. The consumers also rate the job maintaining quality control. If a provider dips in ratings, they cut him from the service.

“We’d be out of business without good providers,” stated Mahoney, “And this year, we’ve added three times the fleet – [laughs] probably the largest in the country!”

“If it’s bad service, you’re stuck in the contract,” noted Mahoney, “And you also risk paying more than if you pay per snowfall.” Costs average is around $30 per job. 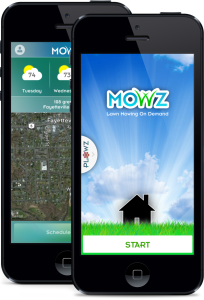 “We want to work as a team with plowing and landscape providers,” noted Mahoney, commenting that the providers that use their service love it and it streamlines their work as well.  The company keeps a personal relationship with them for training and any issues that come up.

And everything is based in the company’s CNY headquarters.

“Like Uber, we are changing the market but providing a better service,” said Mahoney. They’ve added a GPS tracking system for providers at no cost to see where their fleet is at all times, organize their Plowz jobs, and eventually add their existing contract routes as well.

“We want to add as much value to the app as possible,” said Mahoney, “We have a great group of people and are focused on having an incredible season.”

Download Plowz and Mowz from your App Store today or visit www. plowzandmowz.com for more info. 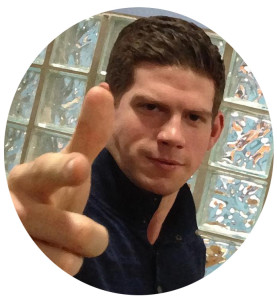