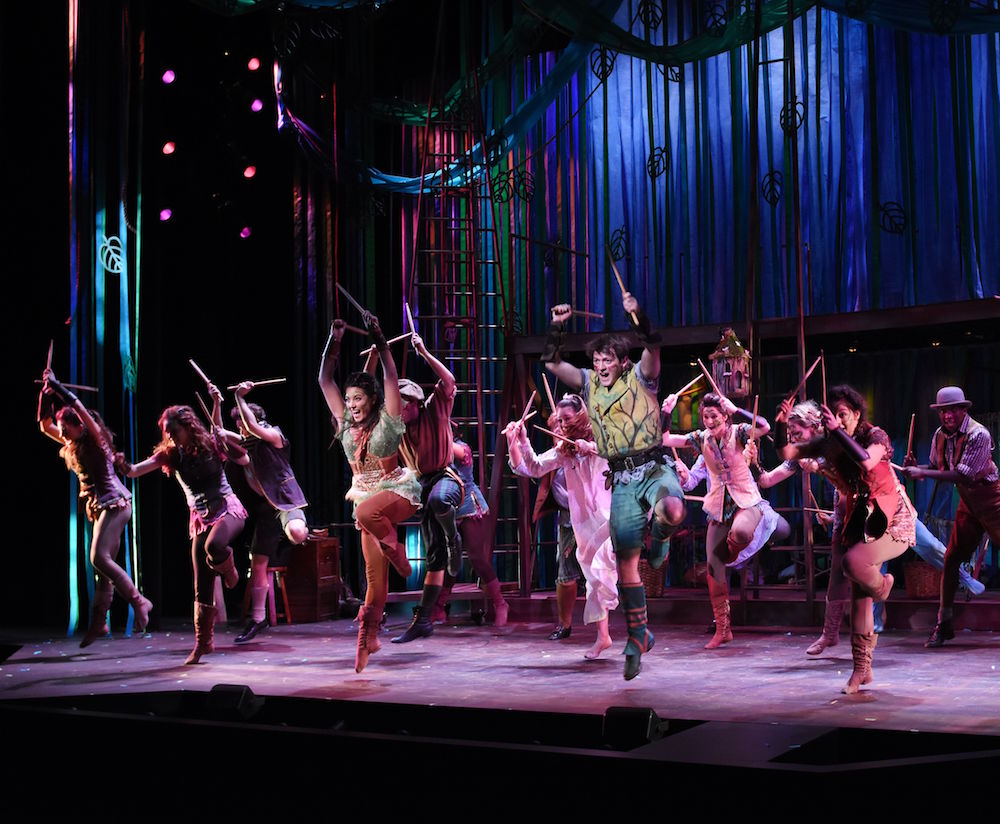 The mystical world of “Peter Pan” thrills at Syracuse Stage.

Here’s an unbeatable formula for a terrific show. First, take the cream of the Syracuse University Drama Department‘s talented musical theater students, add some seasoned professionals, then mix with top technical expertise gathered from around the country.

Add these ingredients to a longtime favorite story, greatly enhanced by songs and dances from the heyday of the American musical, and you’ve got Peter Pan, the perfect family-friendly holiday treat playing through Jan. 3 at Syracuse Stage.

It’s a magical moment when Peter (the sweet-voiced Troy Hussmann) takes to the air with Wendy Darling (appealingly played by Delphi Borich) and her two younger brothers John and Michael (Matthew Caraccioli and Seamus Gailor). The individual flying style of each adds to the charm, with the experienced Peter swooping with ease, while little Michael stamps the air with his feet. (Flying effects were provided by the expert ZFX Company.) The Palladian windows of the Darlings’ nursery open wide, and off they all go through the star-strewn sky, leaving planet earth far behind.

It’s when Peter and his new friends get to Neverland that the fun really begins. From the moment Peter arrives back home, leading a parade of animals including a gawky, long-necked, splendidly plumed ostrich, we’re in a storybook world. After some initial misunderstanding, Peter’s band of Lost Boys accept Wendy as their proxy mother.

But dangers lurk all round in Neverland. The Lost Boys have to look out for the warlike troop led by Tiger Lily (Ana Marcu), wisely converted in this production from author J.M Barrie’s politically incorrect Indians to a band of powerful female warriors.

Their real enemy is the dastardly pirate, Captain Hook, played with delicious maliciousness by Donald Corren. A velvet-cloaked dandy, Corren plucks fussily at the lace ruffle at his wrist as he curls his lip in a stage villain’s evil laugh. All it takes is the sound of a ticking clock to puncture his bravado and reveal him as a coward. Corren’s comic timing is perfect, as is that of the sound technician who produces a “clink” when the captain brings his hook down on the head of his sidekick Smee (Kraig Swartz).

At the heart of this production are knockout dance numbers, choreographed by Anthony Salatino, that happily overshadow some of the weirder aspects of this story about a boy on the cusp of adolescence who refuses to make the transition to adulthood. The real showstopper is a percussive dance with sticks performed by the combined forces of the Lost Boys and Tiger Lily’s troupe.

Captain Hook’s pirates provide some hilarious dances of their own, including a tarantella complete with castanets and some soft-shoe steps straight out of burlesque. Corren is at his funniest when he is beguiled by what he takes to be “a mysterious lady,” which is only Peter and Tiger Lily very thinly disguised behind a gauzy veil, singing an operatic duo accompanied by flute. Music director Brian Cimmet’s orchestra is up to the task, as it is throughout the many songs by which this musical tells its story.

Director Paul Barnes had to pull together a lot of different pieces to create this show. It all works, right down to the person operating the follow spots. Barnes even manages to bring the audience into the act. Captain Hook’s pursuit of his intended victims spills off the stage, with everyone — ostrich included — being chased up and down the aisles. A 3-year-old sitting nearby was entranced, as were some of us who grew up a long time ago.

Music, Magic and Matilda
Home and Hilarity for the Holidays
To Top