Despite its quirky surrealism and origin with the Royal Shakespeare Company, Dennis Kelly and Tim Minchin’s hit show Matilda: The Musical is aimed squarely at a wide audience niche: hip families. If your favorite recent shows were The Lion King and Wicked, this one’s for you.

Roald Dahl’s much-loved 1988 novel upon which Matilda is based remains a big draw, but the material alone could not take the subsequent stage musical in new directions. Matilda: The Musical sings in its own voice, as it celebrates the victory of literacy over bullying and vacuity. Famous Artists’ touring production begins a six-day, eight-performance run on Tuesday, Dec. 1, at downtown Syracuse’s Landmark Theatre. 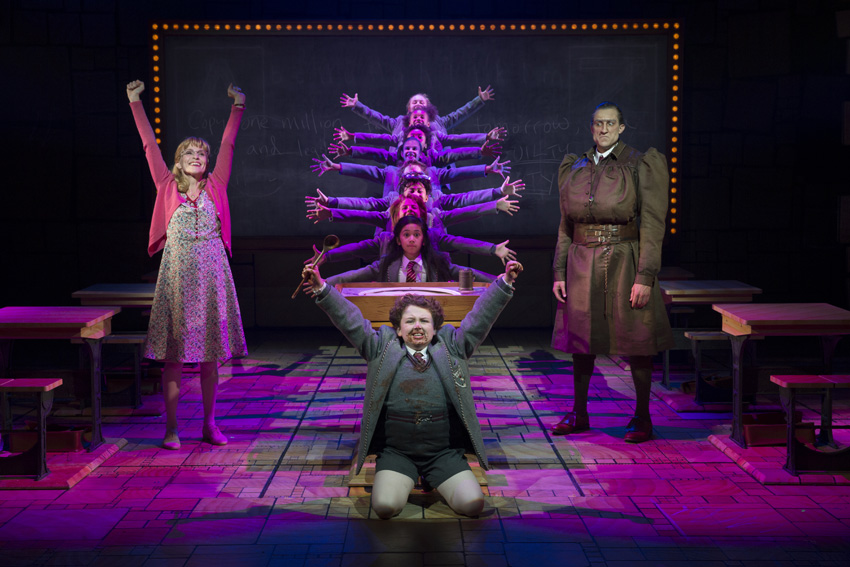 At first glance the story sounds like a sentimental Victorian fable. The Matilda of the title is a precocious, sensitive child ridiculed by her coarse, unfeeling parents, the Wormwoods. School is worse, where she is brutalized by Miss Trunchbull, a 6-foot-6 magnification of Annie’s Miss Hannigan in combat boots.

But Matilda has three consolations, beginning with a romance with books, supplied by the Caribbean-accented librarian Mrs. Phelps (Ora Jones), followed by the loving appreciation of the unsubtly named teacher Miss Honey (Jennifer Blood). Then there is Matilda’s gift of telekinesis, allowing her to taunt authority figures and bullies.

Raucous spoofery explodes sentiment so that all the villains end up with the bulk of the best lines. Vain, Betty Boop-voiced Mrs. Wormwood (Cassie Silva) complains about the timing of Matilda’s birth when it interferes with her participation in dance competitions. She insults saintly Miss Honey by cracking, “You’ve got the books. I’ve got the looks.”

Both Wormwoods champion mindlessness and thus favor their son Michael (Danny Tieger), an inert couch potato. The pompadoured head of Mr. Wormwood (the splendid Quinn Mattfeld), a sleazy used car salesman, is so empty that he continually refers to Matilda as his son. It might be wishful thinking, but more likely he never noticed. Mr. Wormwood and Michael’s ironically daffy duet, “Telly,” praises the joys of ignorance. It’s a number that could have a future life as a stand-alone party piece.

Parents taking their offspring to see Matilda are by no means encouraging youthful rebellion at home. Audiences immediately grasp without explanation that the noxious Wormwoods speak for values that most parents denounce. If Matilda were intending to teach (too much fun for that), this would be a neat rhetorical reversal. In her biggest number, “Loud,” crass Mrs. Wormwood screeches, “The less you have to sell, the harder to sell it/ The less you have to say, the louder you tell it.”

Standing above them all hulks the Beelzebub pedagogue Miss Trunchbull (Mr. Bryce Ryness), Matilda’s most striking creation. In flaunted gender-bending unanticipated in Dahl, Miss Trunchbull might sport prosthetic mammaries under an army jacket, but in most respects the character is male, with unshaven legs. Ryness never attempts a falsetto but instead speaks in a kind of epicene sepulchral purr, perhaps a mimic of Henry Daniell, the indelible presence in 1940s horror films like The Body Snatchers. Trunchbull sneers that the children are “maggots.” 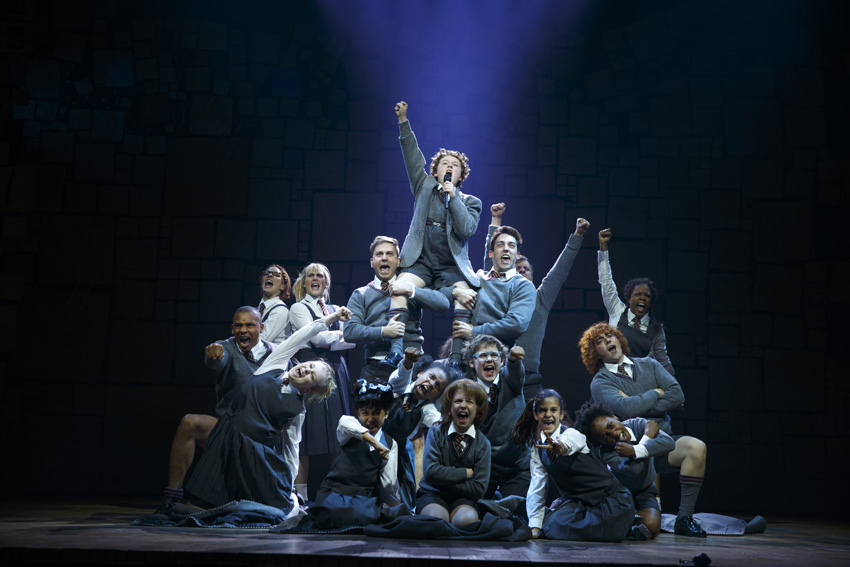 Trunchbull leads two big numbers: a threatening “The Hammer” in the first act, and the even more spectacular “The Smell of Rebellion” in the second, with the last chorus delivered during a gymnastic exercise. In both Trunchbull is vocally supported by Miss Honey in a kind of brimstone-and-treacle duet. “Rebellion” should be Matilda’s showstopper — if it were about three minutes shorter.

With all the free-floating abrasion in Matilda it’s tough to make (ahem) sweetness interesting. That assignment is given to soprano Jennifer Blood’s Miss Honey. Her two solos, “Pathetic” and “My House,” are needed relief from the higher volume elsewhere. The character can still deliver surprise with highly useful revelations about family secrets.

British playwright Dennis Kelly, 45, and Australian stand-up comic and composer Tom Minchin, 40, were little known before their unprecedented collaboration on Matilda at Stratford-on-Avon in 2010. Kelly, like director Julie Taymor of The Lion King, was grounded in edgy, non-commercial projects. Minchin, not known primarily as a composer, employed music to help construct sketches where his words remain dominant.

Unlike Sir Andrew Lloyd Weber they never worshiped at the shrines of Richard Rodgers and Frederick Loewe. This is why Matilda feels as though the formula has been thrown overboard. At the same time, Matilda nonetheless resembles golden age musicals such as Oklahoma!. What it lacks is a take-away hit song like Annie’s “Tomorrow” or Wicked’s “For Good.”

In no show since My Fair Lady has language been so much of the artistry. Set designer Rob Howell recognizes this by hanging Scrabble tiles in different scenes. Despite the prominent rock idiom, Tom Minchin’s rapid-fire lyrics and verbal fireworks sound as though he was brought up on Gilbert and Sullivan’s “Modern Major General.”

The burden for verbal excellence falls heaviest on the girl playing the title role of Dickens-loving Matilda. Not only does she have three big numbers but surprisingly long sections of declamation. Three youngsters take the role in different performances: Gabby Gutierrez, Mia Sinclair Jenness and Mabel Tyler.

Much as Matilda’s long speeches are unusual in a musical comedy, they solve a problem in adaptation. Matilda the reader is almost impossible to dramatize: She would be immobile and soundless. Matilda the talker takes her place. We don’t need a Cliff’s Notes to know that most observers think the girl is the young Dahl with the genders reversed. This is why she is a bit spiky and aggressive, rather than lovable, as when she glues her father’s hat to his head.

Although Matilda lacks the class consciousness and polemical edge of Billy Elliot, it borrows the choreographer from that show, Peter Darling. He puts the children’s chorus, male and female, through rigorous, complex and highly expressive routines. In the “When I Grow Up” number, they leap generations before our eyes. 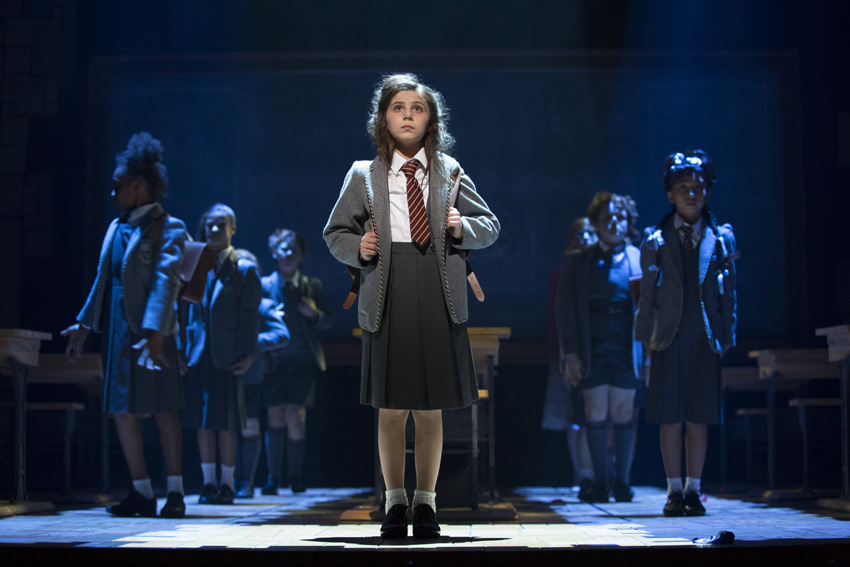 As the production numbers roll on, some of the children, like Bruce, Lavender and Hortensia, set themselves apart from the crowd. As with the three rotating leads for Matilda, other teams of children take these roles in successive performances, making the singling out for praise a bit unfair.

This road company production retains the direction of Matthew Warchus from the Broadway original. Better known for comedy than musicals, Warchus raised Marc Camoletti’s farce Boeing, Boeing from the grave. He has the perfect balance for handling the subterranean dark elements so characteristic in all Dahl books. He also smoothes over the biggest lump in the story, when Mrs. Wormwood’s cheated customers pay him an unwelcome visit far too late.