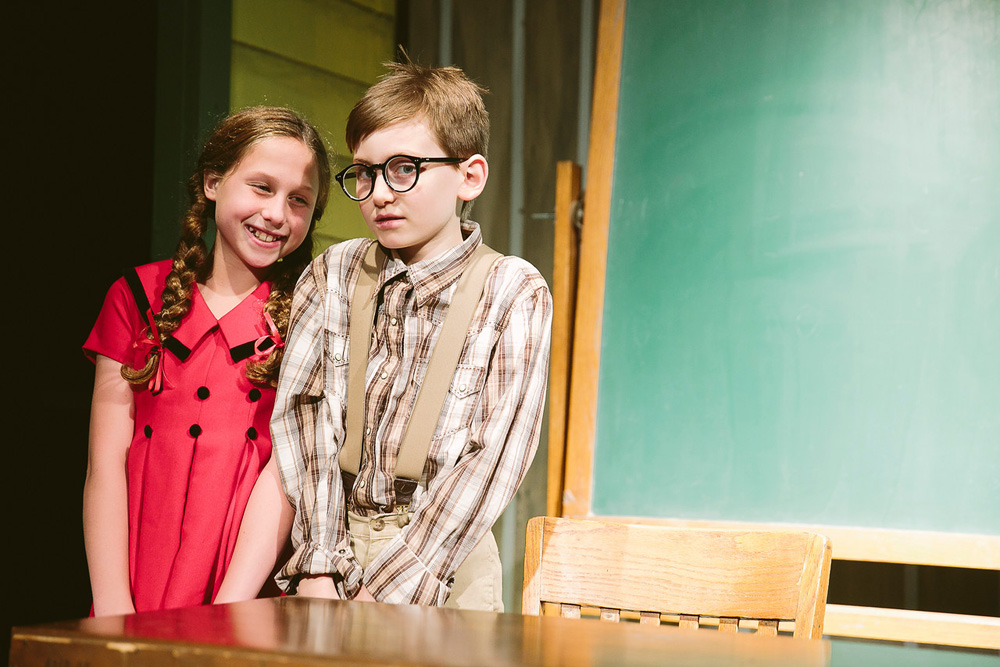 CNY Playhouse’s rendition of “A Christmas Story” supplies the laughs.

A lot of kids drop hints about what they’d like for Christmas. But 9-year-old Ralphie Parker, the central character of A Christmas Story, Central New York Playhouse‘s seasonal offering, goes further. As performed by Collin Dean, Ralphie is a bespectacled, somewhat nerdy kid obsessed by the desire to own a Red Ryder carbine-action 200-shot Range Model BB rifle.

As Christmas approaches, Ralphie’s unceasing strategies to call the BB gun to his parents’ attention are what bind together some lively tales inspired by the childhood experiences of Jean Shepherd, one of America’s all-time great raconteurs. Shepherd, a radio personality during the 1950s, spun vivid stories about his family and boyhood friends in a small town in Indiana. The play by Philip Grecian is adapted from the 1983 yuletide film comedy with Darren McGavin.

In the movie, the voice of Shepherd was heard as narrator for the adult Ralph’s recollections. For this production, Ed Mastin tackles this huge role, adding just the right tone of bemused nostalgia as he watches these scenes take place before his eyes.

Director Dan Rowlands was lucky to borrow items from a local collector of A Christmas Story memorabilia, especially a key prop for one of the play’s funniest episodes. When Ralphie’s “old man” (Steve Rowlands) wins a contest prize, it turns out to be a lamp base in the form of a shapely female leg, covered in a net stocking from its high-heeled shoe to the thigh that disappears under a fringed shade. Ralphie’s mother (Carrie Wilson) shields the eyes of her little son Randy (played by her real son, Alex Wilson) from the shocking sight, but Dad insists on keeping it lit in front of the window, where it is ogled by neighborhood youths.

In another classic episode, Ralphie waits expectantly for an envelope containing the Little Orphan Annie decoder to arrive. The adult Ralph remembers the boy’s high hopes: “I was going to have the wisdom of the ages, the secret of life.” What a letdown when Ralphie sits by the radio with his decoder, only to find that the message is “Drink more Ovaltine.”

Shepherd recounted things we still recognize from our own childhoods. Who didn’t have an aunt who sent inappropriate gifts? Ralphie’s Aunt Clara, forgetting both his age and his gender, sends pink bunny pajamas. Ralphie checks the front porch before obediently trying them on to be sure that none of his classmates from the Warren G. Harding School are lurking there.

Another thing that made Shepherd such a great storyteller was his specificity of detail. Jerry Seinfeld has said he learned everything he knew about comedy from the way Shepherd treated the minor incidents in life. Garrison Keillor’s Lake Wobegone owes a lot to Shepherd’s fictional home of Hohman, Ind. The Central New York Playhouse production of A Christmas Story, playing through Dec. 19, treats these iconic American stories with great affection.