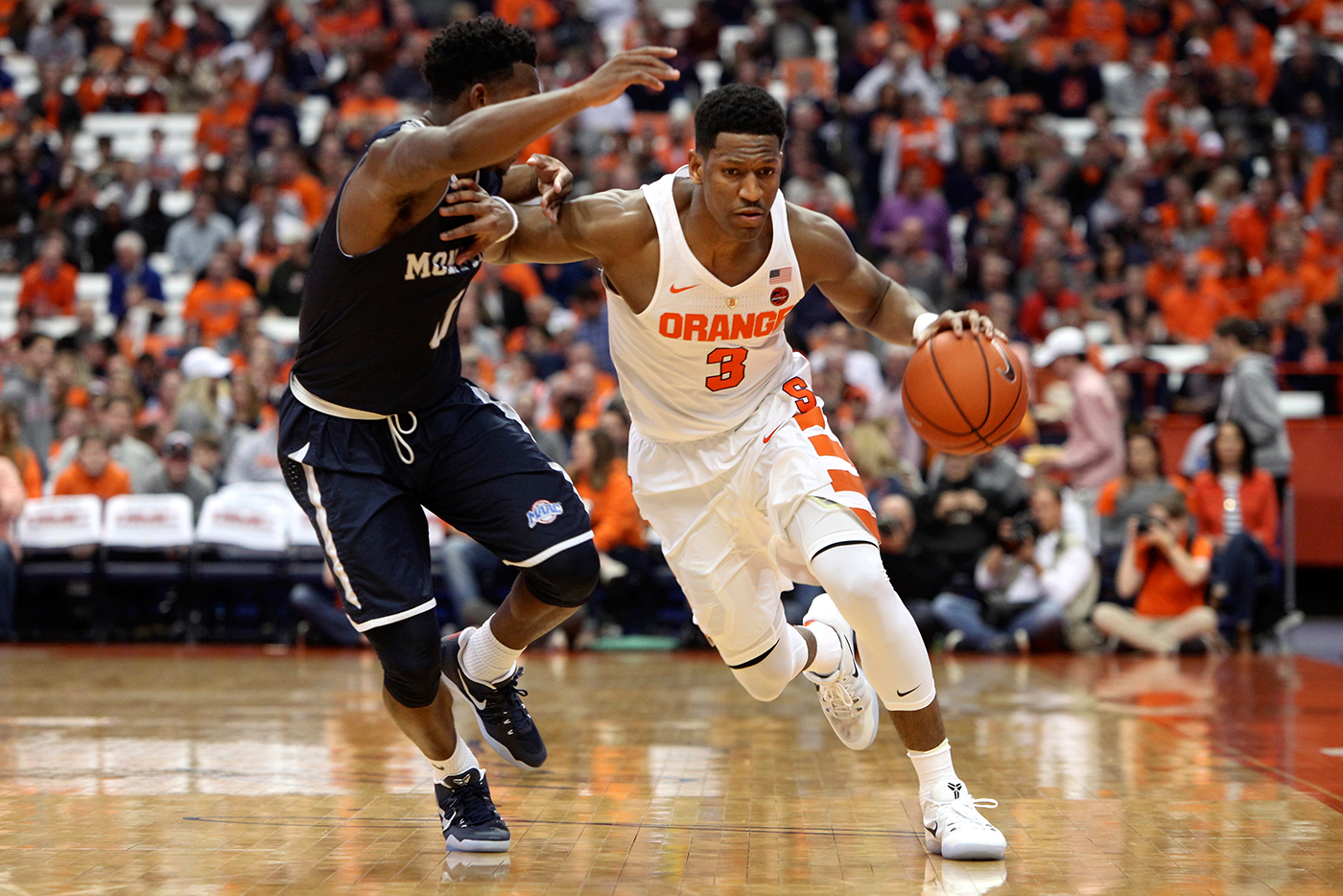 The fifth-year transfer rule may be one of the most controversial topics in college sports, but you’ll get no argument about it around here.

The NCAA rule allows college athletes to play immediately at another school if they have graduated from their previous institution and have not used all of their athletic eligibility. Under normal transfer rules, the transferring athletes would have to sit out one year. 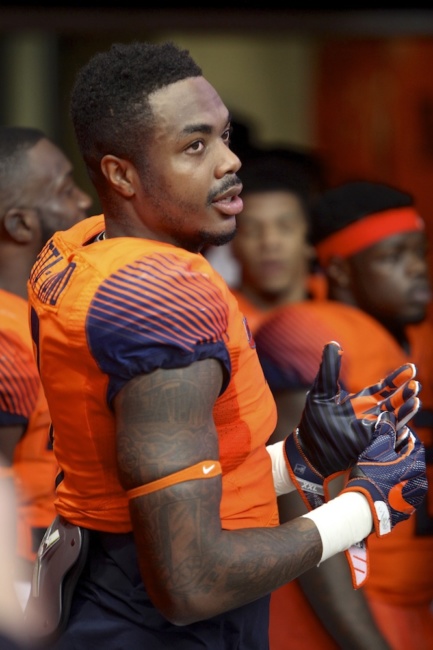 Entering the Nov. 22 game against South Carolina State at the Carrier Dome, White led the 18th-ranked Orange in scoring at 18 points per game and has hit the team’s biggest shots. Despite being the focus of the opponents’ defenses, Etta-Tawo is among the national leaders in receptions (81) and receiving yards (1,304) and he was named one of the 10 semifinalists for the 2016 Biletnikoff Award presented to the country’s best receiver.

“I think it’s very humbling on my part that he had enough faith in this program and my coaches along with the players on this football team to take that journey and make that leap of faith,” SU coach Dino Babers said of Etta-Tawo. “I’m proud of the stuff that he’s done.”

Critics of the fifth-year transfer rule say it’s a loophole that has created a college free agency, allowing the rich to get richer. But those who defend the rule say it’s working the way it was designed: as a reward for athletes who have earned their degree and want to pursue a graduate degree elsewhere.

The 6-foot-7 White, who starts at shooting guard but can also play small forward, played at Kansas for two years before transferring to Nebraska, where he averaged 16.6 points and 5.9 rebounds per game last season. He graduated from Nebraska in the spring and entered the NBA draft, but then withdrew from the draft prior to the deadline to retain his college eligibility.

He took all summer to make his decision, finally selecting Syracuse in late August over Michigan State, Miami and Virginia Commonwealth, which is in his hometown of Richmond, Va. Without the benefit of playing pickup games with his new teammates over the summer, White immediately went to work earning their trust and respect.

“When I came in as a guy who didn’t get here until a day before school started, I knew it was critical that I earned the respect of my coaches and my teammates and not come in with any sense of entitlement,” White said. “So from the first day I came on campus I really worked hard to try to earn the trust of my teammates to let them know I was tough, let them know I was a good teammate and let them know I could help them win. Once you get past that phase where you earn everybody’s respect from the (coaching) staff, it lets the talent speak for itself.”

The Orange won their first three games by an average of 31 points, so to call any basket a clutch basket might be a stretch. But on three occasions in the first half against Holy Cross, White answered a Crusaders’ 3-pointer with one of his own. And against a pesky Monmouth team, White scored all of his game-high 18 points in the first half, allowing his teammates to thrive in the second half.

“Andrew carried us offensively in the first half. That opened us offensively in the second half because they had to worry about him and it got us easy shots,” said freshman guard Tyus Battle, who scored nine points against Monmouth. “That’s how it goes sometimes, (because) we’re a really deep team with a lot of guys and anyone can lead us on any day.”

After South Carolina State, the Orange will meet South Carolina on Saturday, Nov. 26, 2:30 p.m., at the Barclays Center in Brooklyn in the final game of the five-team, round-robin Brooklyn Hoops Holiday Invitational. Syracuse will then face its first major test Tuesday, Nov. 29, at No. 9 Wisconsin in the Big Ten-ACC Challenge. 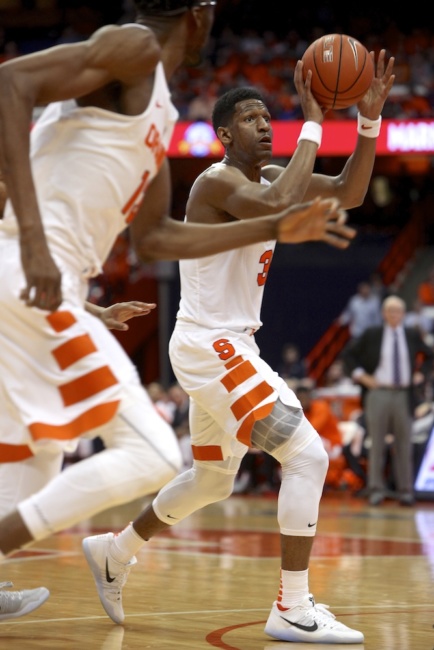 “Coach Boeheim anticipated me playing a big role and obviously there’s no guarantees at a program like this,” White said. “But he told me if I came in and did what I was supposed to do that I would be in the position that I’m in now.”

Etta-Tawo has put himself in position to be drafted into the NFL this spring. The 6-1, 200-pound receiver was a perfect fit for Babers’ up-tempo offense as he broke SU’s single-season reception and receiving yardage records even though starting quarterback Eric Dungey has missed most of the last three games because of a concussion.

Etta-Tawo transferred from Maryland, where he caught 61 passes for 938 yards and three touchdowns — in three seasons. A Powder Springs, Ga., native, Etta-Tawo earned his undergraduate degree in geographical sciences from Maryland.

Etta-Tawo provided one of the few highlights of SU’s 45-14 loss to No. 17 Florida State on Nov. 19 at the Dome when he hauled in quarterback Zack Mahoney’s 46-yard Hail Mary pass in the end zone on the last play of the first half.

But it was Etta-Tawo’s 12-yard reception in the first quarter that NFL scouts will notice because it spotlighted his hands, body control, footwork and toughness as he fought two Florida State defenders for the catch along the sideline and muscled his way for a few extra yards.

In the end, the injury-depleted Orange was no match for Florida State and its star running back Dalvin Cook, who rushed for 225 yards and four touchdowns and became the Seminoles’ all-time leading rusher with 4,166 yards in three seasons. The loss dropped Syracuse’s record to 4-7 overall and 2-5 in the ACC, making it highly unlikely Etta-Tawo and his teammates will be invited to a bowl game.

The Orange will play its final game on Saturday, Nov. 26, 12:30 p.m., at Pittsburgh. As Babers continues to build the program, he’ll be on the lookout for more players like Etta-Tawo who can come in as freshmen and not senior transfers.

“He’s an exceptional player; obviously he’s had some accolades this year,” Babers said. “But, as I said previously, if you get to know the young man, the things he does off the football field are so much better than the stuff he does on. It’s not even close.”