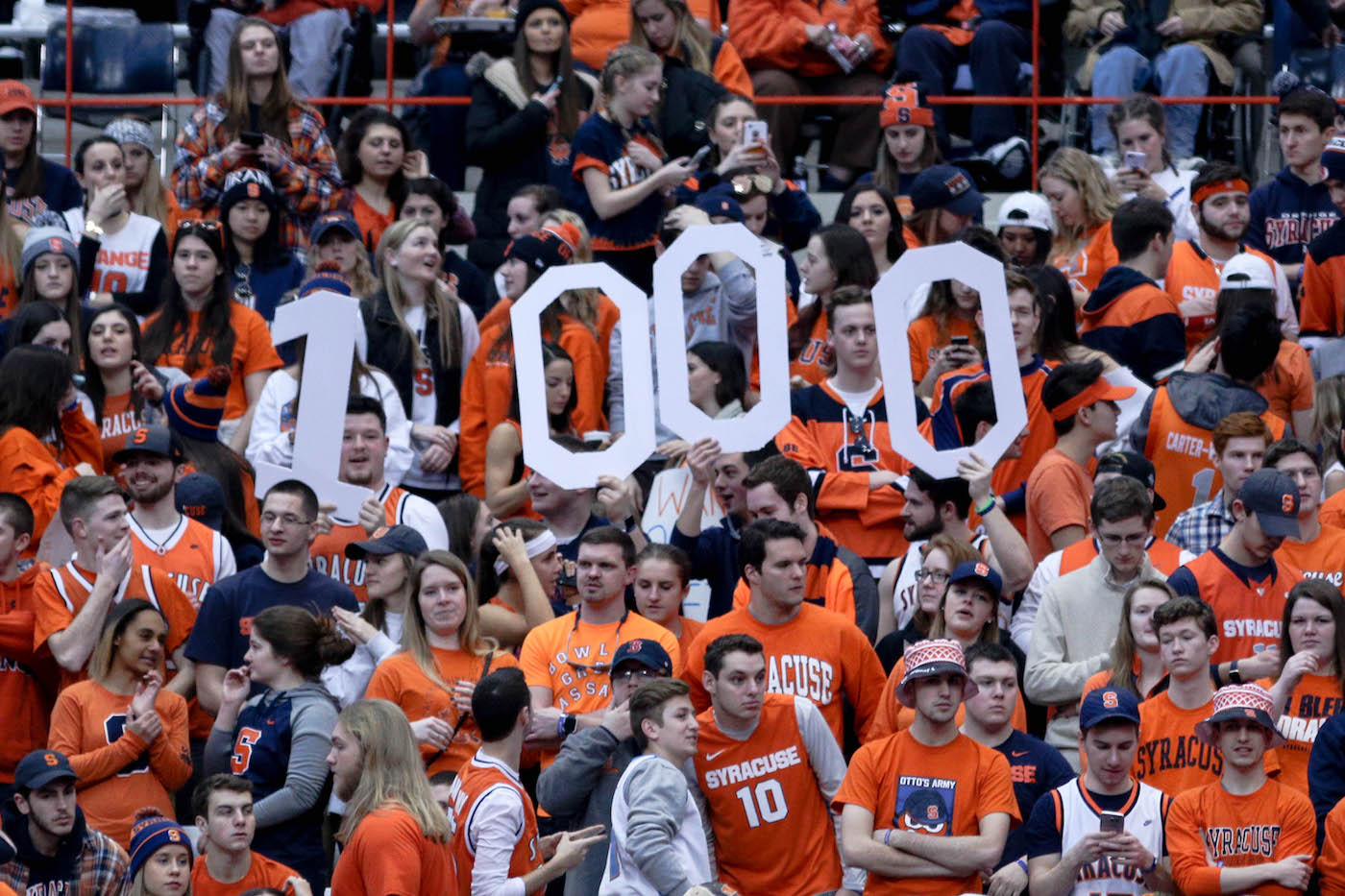 Win No. 1,000 against Virginia leaves Boeheim in high spirits.

But Boeheim must have eaten a Snickers before addressing the media following the Orange’s thrilling 66-62 come-from-behind victory over No. 9 Virginia Feb. 4 at the Carrier Dome.

He was complimentary. He was revealing. He was contrite. And he was funny. Very funny.

Boeheim, now in his 41st season at Syracuse, notched his 1,000th career win against Virginia and became only the second coach in Division I men’s basketball history to reach 1,000. The only other Division I coach with 1,000 wins is Duke’s Mike Krzyzewski, one of Boeheim’s best friends who’s at 1,061 entering the Thursday, Feb. 9, showdown against North Carolina. 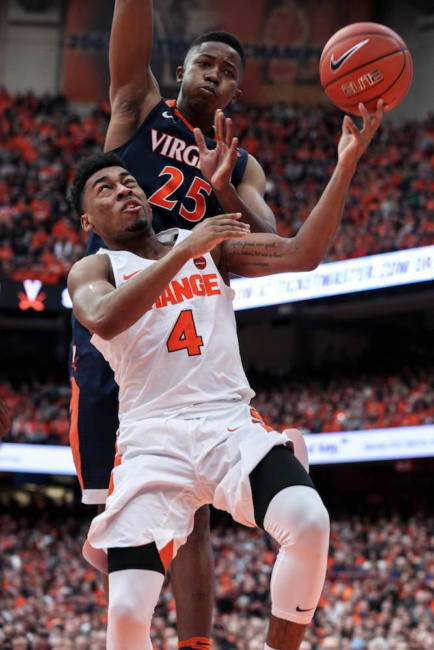 But according to the NCAA power brokers in Indianapolis, the win was Boeheim’s 899th as 101 Orange wins between 2004-2007 and 2010-2012 were vacated because of NCAA violations. And under NCAA rules, Syracuse could not acknowledge the win as Boeheim’s 1,000th, and that also made Boeheim reluctant to talk about it.

But that didn’t stop the Dome crowd of 27,553‚ — the largest crowd of the college basketball season — from celebrating the feat, as many fans waved signs congratulating Boeheim on No. 1,000 and the Syracuse students stormed the court following the game. And it didn’t stop Boeheim from remaining on the court for a few minutes to wave to fans and bask in the upset win and milestone achievement.

“The crowd was so instrumental in the game and that’s what I was trying to show them,” he added. “They were a big part of this win, a big part.”

Boeheim opened his news conference by giving credit to assistant coaches Mike Hopkins and Gerry McNamara for suggesting that the Orange spread the floor on offense in the second half and let Tyus Battle and Andrew White exploit their one-on-one mismatches. Battle and White each scored 23 points as Syracuse rallied from a 12-point halftime deficit.

Later, in a rare peek into his soul, Boeheim admitted that he’s “very sensitive” to criticism after losses. And he was correct when he said that after losses the blogs are filled with comments from “haters” about how the game has passed Boeheim by, the 2-3 zone defense doesn’t work anymore, etc. You wonder what they would say if Boeheim hadn’t taken the Orange to two Final Fours in the past four seasons.

“I’m very sensitive, always have been, always will be, and I don’t think that’s a bad characteristic to have,” Boeheim said. “I care what people think. That’s why I don’t read that stuff when we’re losing because I feel bad enough. I don’t want to feel worse.”

And finally, Boeheim addressed the NCAA violations in a roundabout way by saying “I take responsibility for all that’s happened here in my time here.” The men’s program has been severely penalized by the NCAA twice in Boeheim’s 41-year tenure, and while it’s fair to argue the merits of many NCAA rules, the fact is that the schools sign off on the rules and therefore must play by them.

“Obviously, there’s good and bad, bad losses, bad decisions, bad things that happened,” Boeheim said. “That’s life. That’s what life’s about. The key is, do you get through it? Do you move on to the next stage? That’s all we try to do. Whatever happens, happens. Whatever the results are, you have to own it, and you have to step up.”

Surely, Boeheim has publicly praised his assistant coaches, talked about being sensitive, and taken responsibility for what happens with his program, but all three in one news conference? Stop the presses! And the best part about it was that Boeheim sprinkled in the wry sense of humor that the national media has witnessed far more than the local media.

When told that a syracuse.com poll showed that the majority of fans would count the Virginia win as No. 1,000, Boeheim quipped, “They took a poll and said Hillary Clinton would be president, too. That didn’t work out so good.”

When asked if he noticed the congratulatory signs in the crowd, Boeheim smiled and said, “I can’t see that far away.”

And he said the best part about the win was that, “When I go to see my daughter and son play tonight (for Jamesville-DeWitt High School), now I don’t have to sneak in.”

Boeheim, who turned 72 in November, has said he will stick with his plan to retire following next season. Here’s hoping that the Boeheim we’ll see for the rest of this season and next will be the one who we saw after the Virginia game — for our sake and for his.

What They Said About Boeheim’s 1,000th

Jim Boeheim: “I know how many wins I’ve had and I’m very proud of it.”

SU guard John Gillon: “We love seeing coach happy because he works so hard, he cares so much, (and) just to see his work pay off means a lot to me and for me to be able to help him (win his 1,000th game) and be just a little part of it is huge.”

Virginia coach Tony Bennett: “He’s a terrific coach; what he’s done, how long he’s been here. Being a coach’s son, my father (Dick) coached for 40-some years, you marvel at someone who can last. He’s his own guy, I like that. What you see is what you get.”

SU forward Tyler Lydon: “Coach is different. He’s laid back outside of basketball. He’s talkative and all that, but he’s more laid back. He just loves this game so much and you see the passion because it is oozing out of him. It’s tough to describe coach, but we all love him. I think he’s the best coach ever and I’m so honored to be here.”

SU forward Andrew White: “This is an era where coaches want to be seen and noticed. Coach Boeheim puts the system in and he sits in his chair and lets his guys go out and make plays. That’s been the biggest thing for me and for some of the other guys on this team because he doesn’t do it for any credit or attention. He really does just live to win. There’s no extracurricular activity to him. That’s why I love playing for him as a coach.”