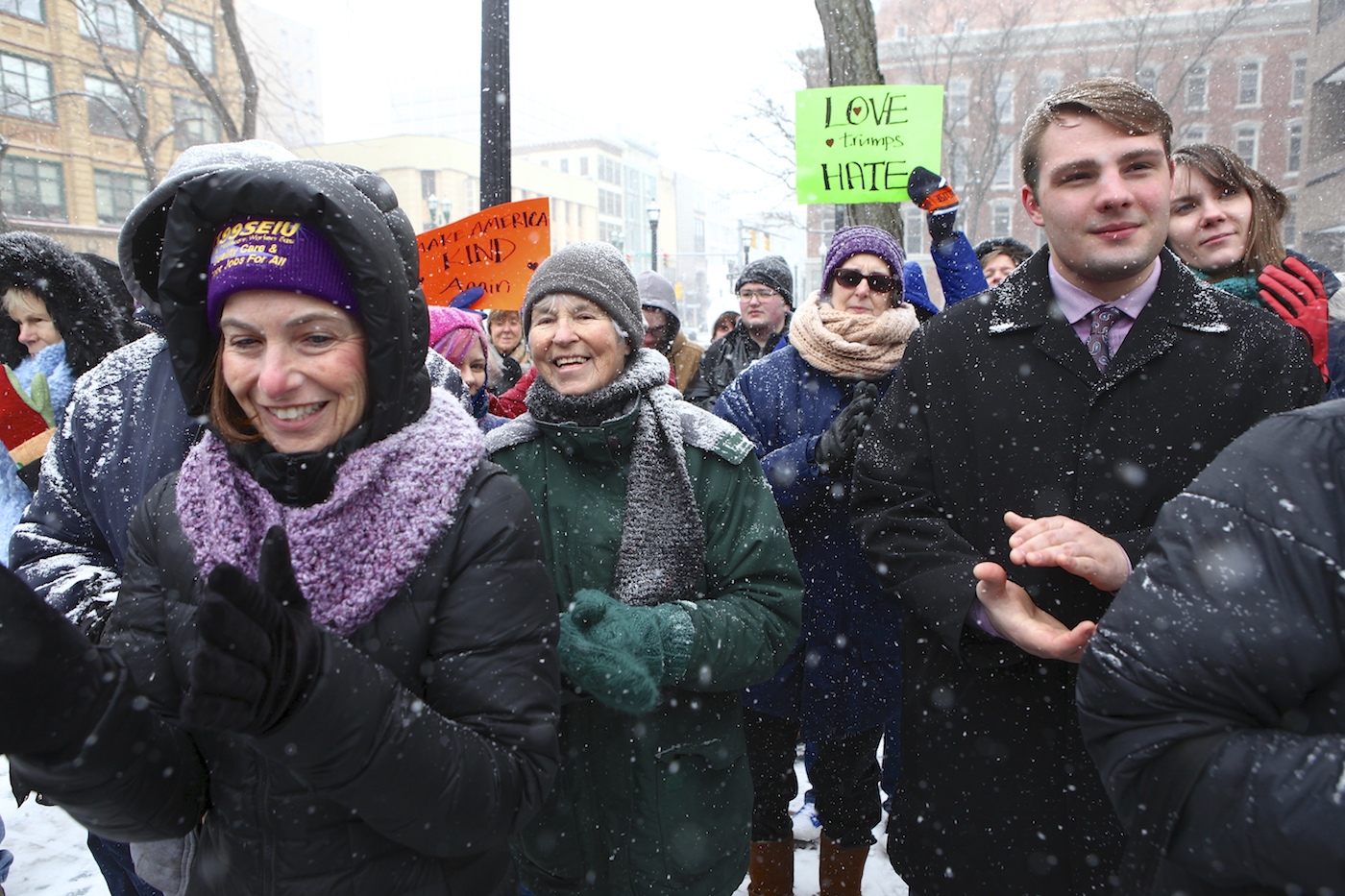 Mayor Stephanie Miner is continuing to ‘advocate for American values.’

It’s no big surprise that many Onondaga County residents are unhappy with President Donald Trump’s agenda. After all, voters here supported Hillary Clinton over Trump 52.4 to 39.8 percent. (Trump beat Clinton in Cayuga, Madison and Oswego counties.) What is unusual, at least in recent memory, are the large crowds that have taken to the streets several times since Trump’s Jan. 20 inauguration.

The first rallies took place just a day after Trump was sworn in as the 45th president of the United States. The Women’s March in Seneca Falls and Syracuse in Solitary drew 8,000-plus people and 2,000-plus, respectively. Those events had been in the works since just days after the presidential election, but participation far exceeded organizers’ expectations.

All of these protests have drawn people who never before joined a public protest, and the crowds are more diverse in terms of age and race than the majority of local protests in recent years.

To paraphrase Trump: What the hell is going on?

Grant Reeher, director of SU’s Campbell Public Affairs Program, agreed that the size of the protests is noteworthy, but he warned against facile comparisons to other protests. He noted that the recent protests followed a highly partisan presidential election, which few (Reeher included) did not expect Trump to win. Nor should we underestimate the power of social media to mobilize people quickly, he said.

For context, note that about 450 people attended a January 2003 rally (featuring the late folk singer Pete Seeger) protesting the impending invasion of Iraq. Ten counter-protesters held signs supporting then-President George Bush that day, according to a local news account. About 100 people participated in a Syracuse protest marking the fifth anniversary of the U.S.-led invasion of Iraq in March 2008.

“In the Vietnam War and the civil rights movement things were being disrupted in some very profound ways,” Reeher said. “The ideologies here are reversed, but we’re talking about something that is striking pretty deep.”

He attributes the large public response to people’s shock at Trump’s electoral victory. “They can’t believe this happened,” he said. “I think the proximity to a shocking election outcome following a very divisive campaign is probably adding fuel to this.” 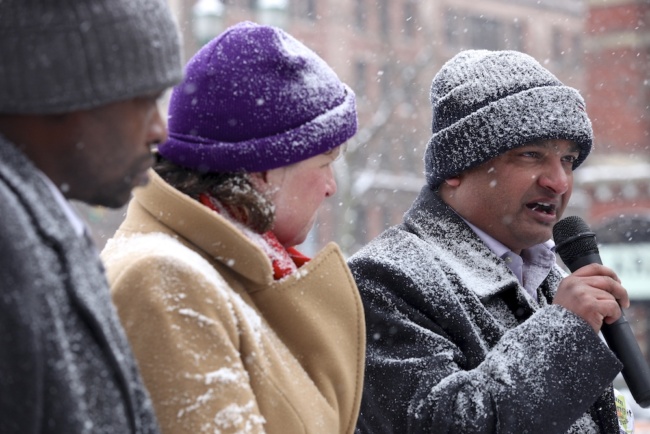 Reeher wonders, though, if any Republicans are showing up. (At least one pro-Trump person attended the Jan. 31 Trump Tuesday event, and a few people the Syracuse New Times interviewed in Seneca Falls said they voted for Trump but are concerned about his treatment of women, the future of the Affordable Care Act and a reversal of Roe vs. Wade.)

“Is this Democrats showing their anger and disgust at President Trump’s election, in addition to their general objection to the policies?” he asked. “I don’t think these things can be easily parsed. It’s hard to see if it’s a nonpartisan response.”

Nor can we discount Trump’s style as a factor, he added. “What Trump is doing is driving a spike into things,” he said. “This is not a long, drawn-out series of discussions about tweaking Obamacare. It was an executive order. Bam!”

Also unusual is the high-profile participation of Miner, Syracuse’s mayor. In addition to hosting Trump Tuesday (Jan. 31’s focused on local residents who would be affected by the loss of the Affordable Care Act), she spoke at the airport protest and delivered a well-received speech in Seneca Falls Jan. 21.

Miner has never been shy about her position on divisive issues. In September 2015, for example, she criticized U.S. Rep. John Katko, a Republican, for voting to cut off federal funding for Planned Parenthood. She also told a television reporter she used Planned Parenthood as a college and law school student.

In summer 2014, Miner supported a proposal for Syracuse to house unaccompanied Central American children awaiting deportation hearings. And ahead of Trump’s inauguration she announced in her State of the City address that, “As long as I am mayor, Syracuse will be a sanctuary city for vulnerable families who had the misfortune of being born in a war-torn corner of our world.”

Miner’s second four-year term as mayor ends on Dec. 31; she cannot seek a third, consecutive term. But she insists that has nothing to do with why she’s been so vocal. (She said she has not yet decided what she’ll do when her term ends.)

“I believe that I have been authentic throughout my entire career,” she said last week in an interview with the Syracuse New Times. “I didn’t fight Destiny or COR (Development) because it was popular. I thought it was the right thing to do. This is just another example of that.”

Trump’s policies are unusual in our modern history, she said. But she cited the hateful rhetoric of the Know Nothing Party of the mid-19th century, which opposed immigrants and Roman Catholics, and critics of President John F. Kennedy, who said the Vatican would influence his policies.

“We have gone through these dark periods that are not parallel to our values as Americans,” she said. “I don’t know if there has ever been this kind of crisis before with other Syracuse mayors.”

The executive orders on refugees and immigrants resonate with her family story and her experience as Syracuse’s mayor, she said. “My family came here to escape the potato famine,” she said. “They were chased out of Ireland because they were Roman Catholic.”

Her family keeps a sign in their home that says, “No Irish need apply.” “Our extended family never wanted to forget,” she said.

“They come from all over the world and want nothing more than to live in peace and raise their family in peace,” she said. “As a rule, they have a great work ethic. They often don’t speak English and learn it. They start off with minimum-wage jobs and start their own businesses. It is just an inspiring story that I see every day as mayor.”

In her Jan. 21 Seneca Falls speech, Miner compared the day’s events to the 19th-century campaigns for suffrage and abolition. On Jan. 31, she noted that Syracuse played an important role in fights for abolition, civil rights, LGBT issues and fair housing. “Syracuse has always led the way to justice,” she said last week.

Asked if she’ll continue participating in rallies that challenge Trump’s policies, she told the Syracuse New Times, “I will continue to be an advocate for American values.”

Whether Miner’s public comments or citizen protests will influence Central New York’s elected officials remains to be seen. “We’re already in polarized times,” Reeher said. “It might strengthen their resolve. Some of the folks who are more moderate or in moderate districts are probably going to pay more attention. The expectation that a typical Republican is going to turn and say, ‘This is outrageous’ is not very politically likely.”

Coming To America Gets Tougher

Chol Majok fled civil war in Sudan when he was just 6. After seven years in Kenya’s Kakuma refugee camp, he came to Syracuse, one of dozens of Lost Boys to settle here. He graduated from Fowler High School and earned a bachelor’s degree from Syracuse University and a master’s from SUNY Albany. He became a U.S. citizen in 2008.

But should President Donald Trump’s executive order on refugees (a policy New York’s senior senator, Charles Schumer, called “mean-spirited and un-American”) be upheld, Majok could not bring his Sudanese relatives to Syracuse. Sudan is one of the seven countries Trump’s order targets. The ban also includes Iran, Iraq, Libya, Somalia, Syria and Yemen.

“Being here is a blessing for me,” Majok told about 75 people during a lunchtime rally Tuesday, Jan. 31, at Perseverance Park in downtown Syracuse. “A lot of people don’t understand that being a refugee is not a choice. To be a refugee means you are running away.”

Majok was one of three refugees, now American citizens and Syracuse residents, who spoke at the rally, hosted by Syracuse Mayor Stephanie Miner to draw attention to the effects of Trump’s policies. Miner expects to hold weekly events at Perseverance Park, the site of the 2011 Occupy Syracuse protests.

Majok’s comments contradict the Trump administration claim that the refugee screening process is lax and allows entrance to people intent on harming America. “If I wanted to shoot someone, I would be in Sudan,” Majok said, adding that the process to come to the United States took four years. “If that is not enough vetting, I don’t know what is.”

Jay Subedi arrived from Bhutan in Syracuse in 2008. He lives on Syracuse’s North Side, where he educates and advocates for other refugees. He lost his job at InterFaith Works, one of two local agencies that work on refugee resettlement, as a result of Trump’s executive order.

Wearing a button that reads, “I was a refugee,” Subedi said he has encouraged fearful refugees to stand up for their rights. “We came from a world where there is no freedom of speech, no freedom of assembly,” he said. “I live in a country where I have that freedom.”

Cyprien Mihigo came to Syracuse from the Democratic Republic of Congo in 2009. He said he dreamed of coming to America and living in a democracy. Trump’s policies are “not the way to fix the problem,” he said. Refugees “are not the enemies” of American values,” he added.