If new Syracuse University athletic director Mark Coyle has heard it once, he has heard it a thousand times: How are you going to fix the football program?

Hired in June from Idaho’s Boise State University, Coyle took over at SU in early July and made it clear from the start that he was going to take his time and conduct a thorough review that would require “truthful conversations” with third-year football coach Scott Shafer.

“I say that we have to live in truth, always,” Coyle said.

Fair enough. Now here’s the next big question: Can Coyle handle the truth?

As SU football fans know, the sobering truth is that the Orange football program has been in a rut for more than a decade. SU is 61-97 with just three bowl appearances in the past 13 seasons under four coaches (Paul Pasqualoni, Greg Robinson, Doug Marrone and Shafer). To put that in perspective, Atlantic Coast Conference also-ran Wake Forest — the only team picked to finish below the Orange this season in the ACC’s Atlantic Division — is 74-86 over the last 13 years with five bowl appearances.

So there is much work to be done for the Orange to fulfill Coyle’s stated aim of being consistently competitive in the ACC and challenging for bowl games. This year’s team has an opportunity to get off to a nice start as it plays its first four games at the Carrier Dome against Rhode Island, Wake Forest, Central Michigan and LSU. The Orange can’t take anything for granted after last year’s 3-9 showing, but a 3-0 start before facing national power LSU is a realistic goal given the quality of competition.

As Orange fans gear up for the 7 p.m. opener on Friday, Sept. 4, at the Dome, here are five storylines to follow this season: 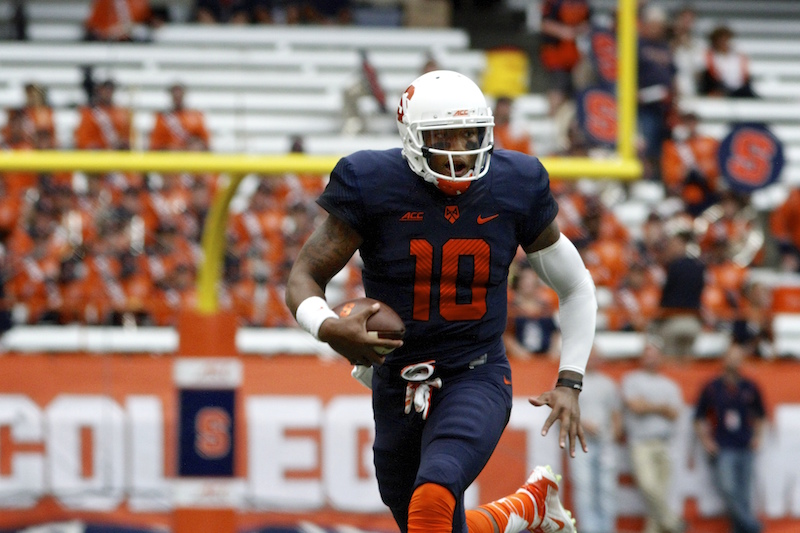 1. Hunt’s Return. The Orange offense struggled last season even before starting quarterback Terrel Hunt suffered a season-ending leg injury late in the fifth game. But clearly a healthy Hunt gives SU’s offense the best chance to rebound from a horrendous season in which it reached the end zone on just 8.4 percent of its drives — the fourth-worst touchdown percentage among major conference teams in the last decade.

Hunt, a senior who ranks 10th on SU’s all-time list with 2,621 passing yards, said during training camp that his time on the sideline was beneficial because he became a better student of the game and a better leader as he was able to support his teammates during the game.
“I feel good. I’m excited to be out there,” Hunt said. “Everything is fine. My body feels healthy, so everything is going well.”

The offense under Lester failed to produce more points or yardage, but he was stuck running the old system without Hunt and several other offensive players who were injured. Lester, who like McDonald had never been a Division I coordinator, employs a scheme that features downhill running with zone-read packages, timing routes and more passes down the field. That should maximize the talents of SU’s best skill position players: hybrid back Erv Phillips and wide receivers Steve Ishmael and Brisly Estime.

“I feel really strongly about where we’re headed,” Shafer said when asked about how his team’s personnel fits Lester’s offense. “I feel good about it. I think things fit better than they have in the past.”

3. The Revamped Defense. SU lost eight starters from last year’s defense that finished among the top 40 in the country in run defense, pass defense and scoring defense despite getting little help from the offense in terms of field position and time of possession.

But defensive coordinator Chuck Bullough is among the best coordinators in the ACC, and from all accounts it appears the Orange defense lacks only experience, not talent. Shafer said sophomore middle linebacker Zaire Franklin has that “it factor” that makes him the leader of the defense.

“We want to improve on what we did last year,” Franklin said. “That’s all we can ask. Even though we had a lot of turnover, we have a lot of guys stepping up and working hard. We want to be better than last year.”

4. Shafer’s Job Security. Obviously, Shafer and Coyle have had several discussions about the state of the program and it appears Coyle is willing to stick to his “you-need-to-take-a-deep-breath” philosophy.

While that’s the way Coyle should look at it, the truth is that college football is a results-based business. And if SU is suffering through another 3-9 season, the rumors will fly about Shafer’s impending dismissal.

5. The Future of the Carrier Dome. Will it stay or will it go? And if stays, what renovations will take place?

Coyle said the Dome is a “friend” and SU has to make it a place where no other team wants to play. For what it’s worth, Coyle is open to anything as he comes to SU from a school that has blue turf at its home stadium.

“When visiting teams come there for the first time, they spend the first quarter staring at the blue. That’s an advantage for Boise State,” Coyle said. “As small as that sounds, it makes a difference. If we can do the right renovations in the Dome and create the atmosphere we want to create, there’s no doubt it can be a special place.”

Header photo: Terrel Hunt in a game against Maryland. Photo by Michael Davis of the Syracuse New Times