Syracuse University announced that senior quarterback Terrel Hunt, who suffered a right Achilles tendon injury about seven minutes into SU’s season-opening win against Rhode Island on Sept. 4, would undergo surgery and miss the rest of the 2015 season. 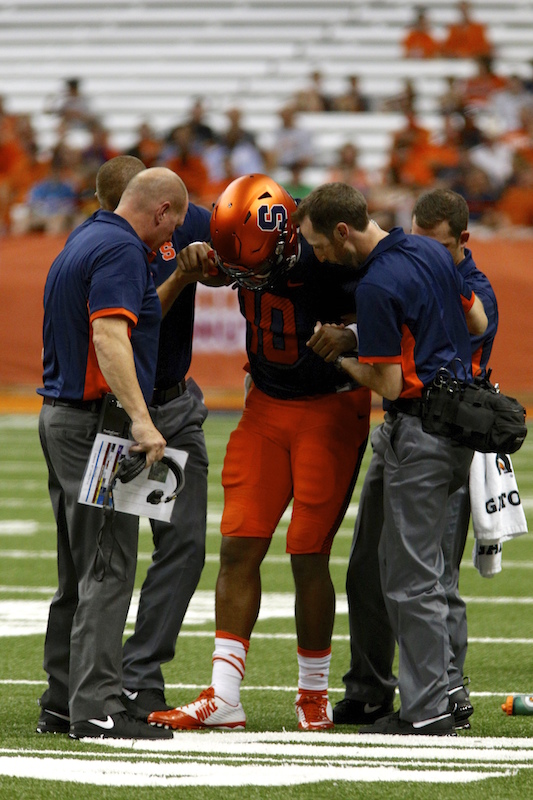 “Tough deal, tough deal,” SU coach Scott Shafer said after the Orange had whitewashed undermanned Rhode Island 47-0. “Just keep your thoughts and prayers out there for him and his family. He’ll be OK; he’ll work through it. He’s got a bunch of brothers that love him and will take good care of him.”

True freshman Eric Dungey, who last year at this time was taking snaps as the starting quarterback at Lakeridge High School in Lake Oswego, Ore., replaced Hunt and played well. He completed 10 of 17 passes for 114 yards and two touchdowns to hybrid back Erv Phillips as he appeared to have a grasp on new offensive coordinator Tim Lester’s offense and make the right decisions with his reads.

“It was all the other guys,” Dungey said. “I mean, they were all picking me up and keeping me calm. I really wasn’t expecting to go in that early. We’re so tight-knit, working hard. We’ve been here since July together building a relationship. We just want to win. We’re competitors.”

Dungey won the backup job late in training camp over redshirt sophomore Austin Wilson, who initially replaced Hunt last season before getting injured. While Dungey’s career is off to a nice start, he’ll get a stiffer test on Saturday, Sept. 12, in SU’s Atlantic Coast Conference opener against Wake Forest at 12:30 p.m. at the Carrier Dome.

“Eric has got the skill set that can do every part of our offense,” Shafer said. “The only thing I will say is we didn’t get into some other things in our offense that we were anxious to. With the injury, we just said let’s keep it simple. We’ve got some other things to throw out there and I’m anxious to do that. Yes, he can run all those things and I’m looking forward to seeing him do it.”

Orange Football: Nowhere to Go But Up
Net Positives
To Top