This week the World Indoor Lacrosse Championship (WILC) brings lacrosse with an international flavor to local venues, celebrating both contemporary lacrosse and the sport’s origins. The Haudenosaunee (Iroquois) first played lacrosse many centuries ago and greatly influenced development of modern-day lacrosse. And now the Six Nations Confederacy is hosting an international lacrosse tournament for the first time.

The WILC kicks off with an opening ceremony on Friday, Sept. 18, 7 to 8 p.m., at the Onondaga County War Memorial, 515 Montgomery St. That event welcomes athletes from the 13 countries participating in the tournament, embraces Mother Earth and explores lacrosse’s primacy in Haudenosaunee culture. For the Haudenosaunee, lacrosse has athletic, communal and religious implications. There will be a dazzling, high-tech light show, greetings from Tadodaho Sid Hill of the Six Nations Confederacy, and 46 Haudenosaunee dancers. Then the Iroquois Nationals and the USA team face off at 8:30 p.m. Tickets are $20, $25 and $45. 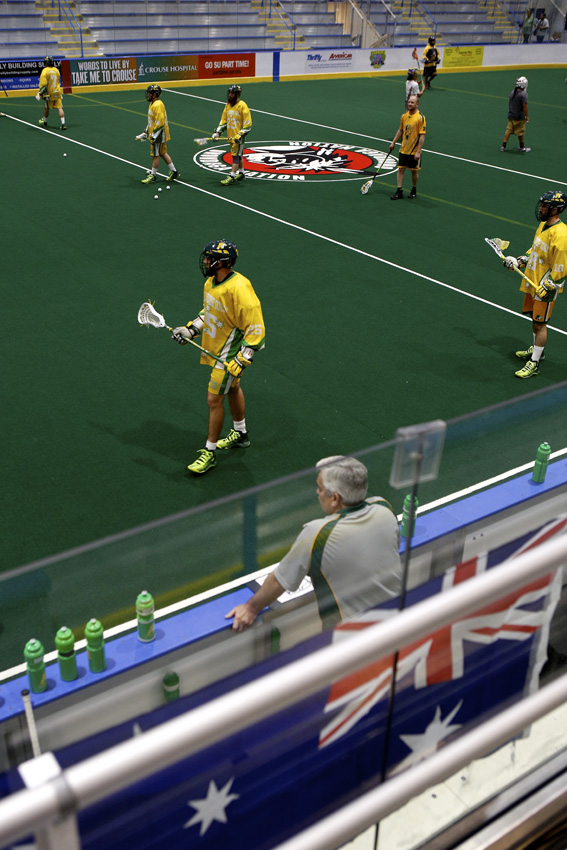 That game, as well as other WILC box-lacrosse contests, will showcase stick skills galore. Indeed, the tournament includes the Iroquois Nationals’ Lyle and Miles Thompson, co-winners of the 2014 Tewaaraton award given to the top player in college lacrosse; a Team Canada roster with the top four scorers from the National Lacrosse League, a pro circuit; Casey Powell, a major star at Syracuse University and in pro lacrosse, on the USA team; and Steven Keogh, one of the quickest sticks in lacrosse, on Ireland’s squad.

While Ireland usually isn’t thought of as a lacrosse hotbed, it’s taking part in the WILC along with nations such as Serbia, Israel, England, Australia and the Czech Republic. Dual citizenship definitely shapes some team rosters. Israel, for example, has both home-grown athletes and those who played lacrosse at Cornell, Hobart and other schools in the United States.

In the WILC, there are three teams whose level of talent outstrips the remaining squads. Canada, the Iroquois Nationals, and the USA regularly finish first, second and third in the WILC. Match-ups between any of these three will be intense and get started early in the tournament.

After playing on Friday night, the Iroquois Nationals meet Team Canada on Sunday, Sept. 21, 5 p.m., at the War Memorial in what promises to be a high-stakes, high-intensity game. Tickets are $20, $25 and $45. By any measure, the Canadians pose a formidable challenge. They have multiple scoring threats, jumbo-size defensemen, and a record of 17-0 in the last three WILC tournaments. 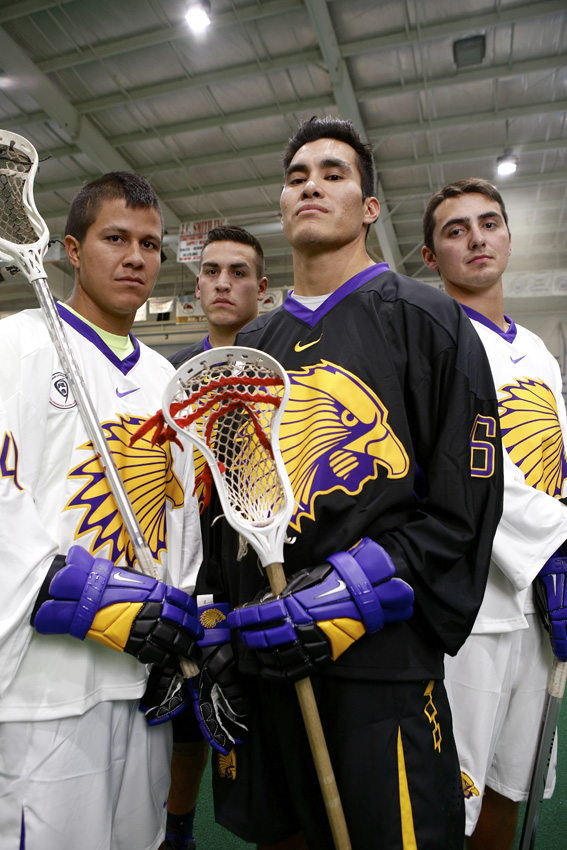 The Iroquois, meanwhile, counter with Miles and Lyle Thompson, who are comfortable scoring or distributing the ball; NLL stars Johnny Powless and Jeff Shattler; and Randy Staats, a superb stickhandler. Brett Bucktooth and Jeremy Thompson, who play pro ball and are mainstays on the Onondaga Nation’s RedHawks box-lacrosse team, have skills that can prove valuable in the WILC. Bucktooth is a fine outside shooter, while Thompson has the ability to win a face-off and generate instant offense.

As the tournament progresses, team depth will definitely be a factor. Team Canada plays four days in a row, while the United States team plays on Sunday, Sept. 20, through Tuesday, Sept. 22, at Tsha’hon’nonyen’dakhaw’, an arena on the Onondaga Nation, capital of the Six Nations Confederacy. At the same site, the Iroquois Nationals play England on Sept. 22 and the Czech Republic on Wednesday, Sept. 23. Those games, as well as those played at Village Pavilion, a second Onondaga Nation venue, accentuate the theme of the 2015 WILC: “Lacrosse is Coming Home.” Day passes are available for many games at the Nedrow complex, including $20 for adults and $15 for age 18 and under.

The tournament wraps Sept. 27 at the Carrier Dome with bronze-medal and gold-medal games at 1 p.m. and 4 p.m., respectively, and closing ceremonies at 7 p.m. Hundreds of college lacrosse games have been played at the Dome, but this is the first time for a box-lacrosse contest there. Tickets are $20, $30 and $50.

Over the course of the WILC, fans will get a heavy dose of box lacrosse, a six-on-six game played on an area the size of a hockey rink. A 30-second shot clock makes for fast-paced play and constant shifts between offense and defense. Players use only short sticks; the long sticks wielded by defensemen in college lacrosse are banned.

Finally, box lacrosse, like many team sports, is a game of moments: An offensive player turning, twisting, shooting from an improbable angle, and scoring. Players shooting or passing behind the back. A forward trying to position himself in the “slot,” just seven or eight yards away from the goal, and being outmuscled by a defender. One of the best movements of all is a top-notch goalie, with a game on the line, smacking away a point-blank shot and preserving a win.

The Onondaga Nation made good on its promise Sunday, Sept. 13, to welcome Team England to its home for the first international sporting event held on indigenous lands.

The English players were the first international team to arrive for the 2015 World Indoor Lacrosse Championship, which begins Friday, Sept. 18. Thirteen nations, including the Haudenosaunee, will compete during the event, which runs through Sunday, Sept. 27, on the Onondaga Nation and in Syracuse. The theme: Friendship and Peace.

The United Kingdom has not been as welcoming to indigenous competitors. Twice in five years, the U.K. refused to admit to its country a Haudenousaunee lacrosse team. Earlier this summer, the Haudenosaunee Nation Women’s Lacrosse Board withdrew its under-19 team from the 2015 Federation of International Lacrosse (FIL) U19 World Championship. In 2010, the Iroquois Nationals men’s squad withdrew from its world tournament in Manchester, England, after several days of diplomatic efforts failed.

In both cases, British officials said the Native Americans could enter the U.K. using Canadian or American passports in addition to Haudenosaunee passports. Haudenosaunee have traveled internationally on passports from their sovereign nation since 1977 and said that compromise would undermine their identity and history.

That backdrop makes hosting the international event especially sweet to the Haudenosaunee. “It’s a huge deal for us. It illustrates who we are,” said Oren Lyons, Onondaga Nation faith keeper. “We (indigenous peoples) were deliberately excluded from history. Any reference to us was pejorative. They tried to wipe us out.”

In somewhat ironic timing, as the lacrosse championship continues, some Native Americans and their allies are taking on the larger issues indigenous rights. A group hopes to get the attention of Pope Francis, who is visiting the United States Tuesday, Sept. 22, through Sunday, Sept. 27. They are continuing their decades-long effort to see the Vatican repudiate the 15th-century Doctrine of Discovery. The papal decrees gave Christian explorers the right to lay claim to any land that was not inhabited by Christians and was available to be “discovered.”

The church documents led to efforts to squelch indigenous languages and practices. It also affects Native American sovereignty and treaty obligations. Supreme Court Justice Ruth Bader Ginsburg cited the Doctrine of Discovery in a 2005 land-claim ruling against the Oneidas, one of the six nations of the Haudenosaunee.

The international lacrosse championship allows the Haudenosaunee to reclaim their game and promote their culture, even as they continue to work toward international recognition and respect. 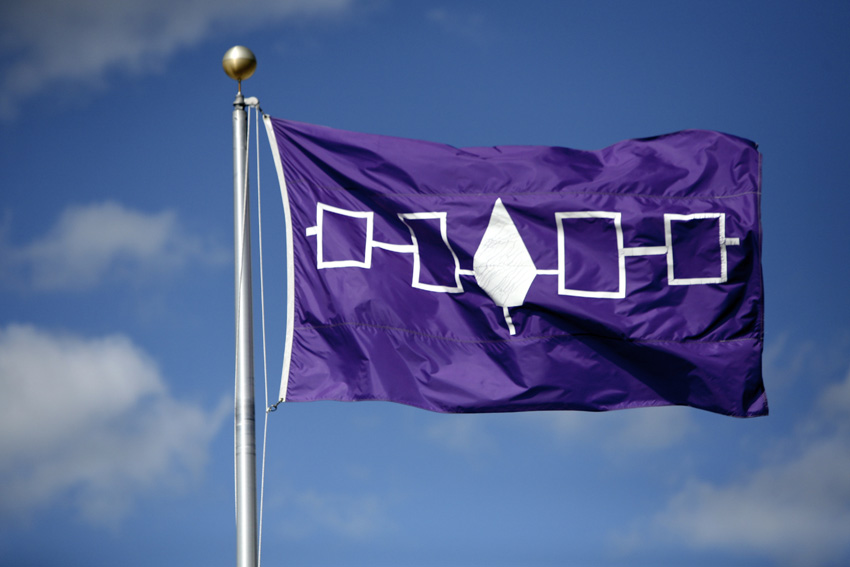 “The game originated here,” said Lyons, who was an All American lacrosse player at Syracuse University. At 85, he still plays occasionally.

“We taught both the English and the French,” he said. “The French Jesuits were the first to see the game and dubbed it lacrosse because the stick resembled a crucifix.”

Haudenosaunee consider lacrosse — the game they call Deyontsiga’ehs, “They bump hips,” — a gift from the Creator.

“It is said that every time we step onto the field, there is a parallel game in the sky world, and, as players of this sacred game, our final journey home begins with an entrance into his game,” Kent Lyons wrote in an essay posted on the WILC website.

In addition to lacrosse games, visitors can participate in cultural and educational events. A cultural festival takes place at the Onondaga Nation WILC Village, next to the Onondaga Nation Arena on Route 11. Admission is free, although the schedule is subject to change. (See wilc2015.com/event-schedule/.) Native dancers, musicians, artisans and craftspeople from North America will showcase Native history and traditions.

News and Blues
Splitting Heirs in Political Dynasties
To Top