Syracuse musicians, Jess Novak and Brian Golden, are on tour for one month. Read about it here.

I’ve done a month on the road before and I do recall the time-warp sensation. When you don’t know exactly where you’re coming from, going to, who you’re staying with, what you’re eating, how much money you’re making or spending – every day feels incredibly long. Any normal schedule is thrown to the wind and even the plans that seem concrete can crumble at any moment due to weather, traffic, car problems or personality conflicts. The road is a wildly unpredictable place. Yet, when looking back, the time seems to have flown by.

So, though we’ve (myself and Brian Golden) only been on the road since Friday, Sept. 26 – it could easily be mistaken for a month’s time in my mind. In that time we’ve driven to Virginia, opened for a band, played a festival, camped in North Carolina and joined with Central New York friends in Myrtle Beach. We’ve sold CDs, played shows, made friends, sat in on sets, crossed borders and witnessed how small the world can be – and also how big and different. 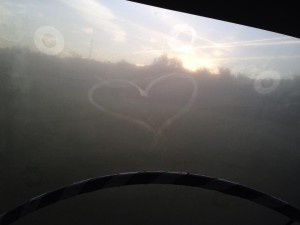 When we pulled into our first show at Clementine Café in Harrisonburg, Va., it was a homecoming for me. I went to undergrad at James Madison University and still remember the town vividly. Within minutes of arriving, I was messaged by a high school friend from New Jersey – he and his brother were in town, just happened to be eating at Clementine, saw my name on a table top ad and were thrilled that they’d be able to see me perform (in this fashion) for the first time. Though I was in all types of bands in high school, I played French Horn. They had never seen my play violin, guitar or sing. Robert, who works in the music industry, was thrilled and impressed to hear me sing “Bobby McGee”. It’s amazing how a few moments, a few words, can have such an impact.

Along with the instant connection with old friends, Golden’s mom sent us a care package which was waiting at Clementine (an amazing surprise) and the band we opened for, Charlottesville’s Chamomile and Whiskey, became instant friends – a crucial component to the road. We sprinted to Spaghettifest after the show and I was reunited with more friends from college and even friends from Syracuse – the men of Sophistafunk.

In a music industry class in college, a speaker told us – the music industry is one of friends. It’s a fact proven again and again. My old professor runs Spaghettifest and has his students work the fest – myself included just a few years back. The bands I watched and admired, were now watching me and Golden. And John Charlet of the ska band, Murphy’s Kids (one of my very favorite bands, still), even asked me to sit in on his set, something I wouldn’t have dreamed a few years back. And to add to the circle – a song I wrote for the latest album (The Golden Novak Band), “Hands On”, was inspired years ago by a Murphy’s Kids song of the same title.

It all comes back around (and that is just a taste of what we’ve experienced).

Likewise, when we rolled up to a campground south of Greensboro, SC, the mother of the owner immediately struck up a conversation, telling us that she is from Elmira, NY, her brother lives in Syracuse and she and her husband of 52 years live in New Smyrna Beach, FL – right where we’re heading.

People say that the more coincidences you witness in life, the more proof it is that you’re on the right track. If that is the case – we’re definitely in the right direction. 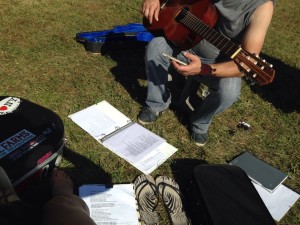 The tour, which was booked and mapped out 100% independently, is a product of inspiration. I’ve had an itch to travel the world since I was born, cultivated by parents who taught us how to travel efficiently. I was incredibly fortunate to travel to Maine, Michigan and Florida (all by car) by the time I was 10 and when I was 11 I toured Europe with an orchestra. It’s no surprise that after touring with Sophistafunk in 2013, my head opened up with the idea that travel – anywhere – was fully possible. When I started playing with Brian Golden in July 2013 – both of us unattached to circumstances which might hold us down to one place – the decision was already made. We were going to take advantage of our position. We were going to hit the road.

Now, just more than a year later, we’re doing it. If nothing else, I hope this message is made clear – anything is possible if you put your dreams into action. Reality is manifested by your mind if only you open it up.

While every day provides new adventure and opportunity, more than anything, each day provides proof that life is what you make it and that luck isn’t by chance – it’s created. While a million disasters can (and may!?) happen on the road – a million beautiful things will, too.