Nuns based on Syracuse’s North Side help children in Kenya.

The Sisters of St. Francis of the Neumann Communities, based on Syracuse’s North Side, recently offered to help immigrant children detained at the southern border as they seek asylum in the United States. Writer Toni Guidice examines the order’s dedication to help children elsewhere in the world.

(Reporter’s note: The recent offer by the Sisters of St. Francis of the Neumann Communities to house undocumented immigrant children did not surprise me. In March, I had the opportunity to spend time with two Franciscan nuns who run a primary school and trade school in Timau, Kenya. When there is need, the sisters step up and step in. They are making a difference for children around the world.)

No one is sure exactly how many days Sylvia wandered the grounds of St. Elizabeth Primary School, listening with envy to soft voices drifting from its classrooms. One teacher remembers shooing the little girl away. 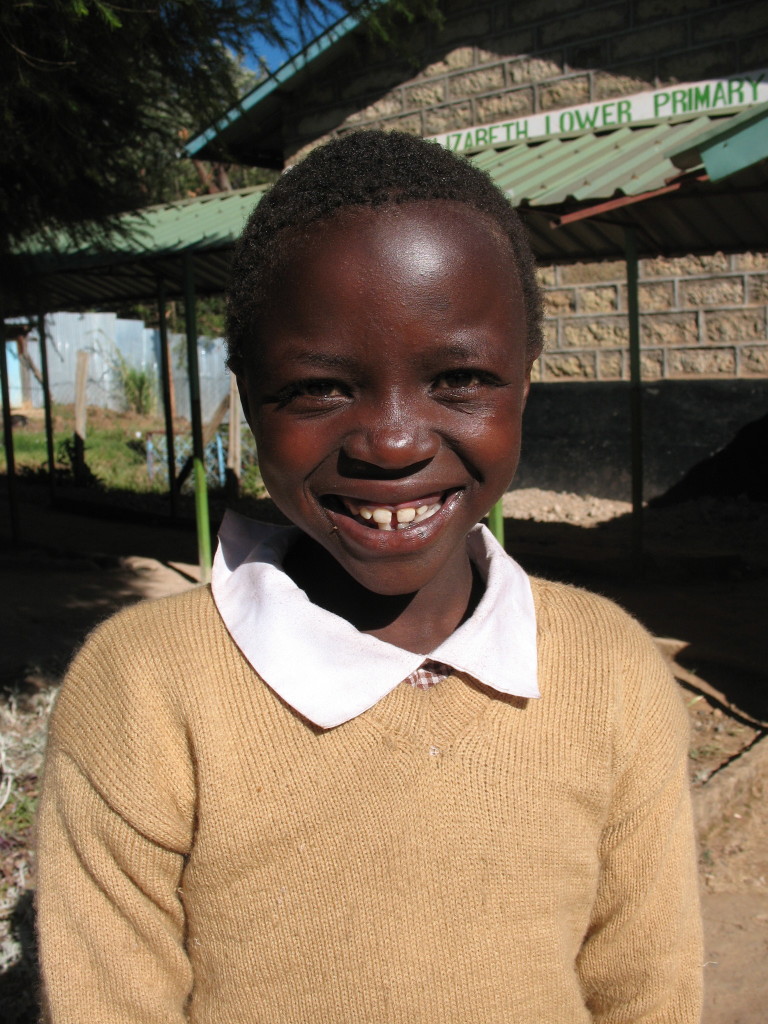 No one is sure exactly how many days Sylvia wandered the grounds of St. Elizabeth Primary School, listening with envy to soft voices drifting from its classrooms. One teacher remembers shooing the little girl away.
Photo by Toni Guidice.

One day, she walked into the office of the assistant principal, Sister Bea Leising, picked up a Swahili book from Leising’s desk, opened it and slowly began to read. Sylvia asked if she could come to the little school, which had 200 children on its waiting list.

When Leising told Sylvia to come back with her mother, the girl bowed her head and said quietly that she had no mother. The child appeared ashamed, Leising recalled.

Immediately, the nun said, “she had my heart.”

The next time Sylvia returned, she came with her grandmother in tow and her school and vaccination records in hand. The 9-year-old was admitted to the second grade.

“What else could we do?” Leising asked.

Sylvia’s story is not unusual among the students at the school, in Timau, Kenya, a sprawling town along a dusty highway at the foot of snow-tipped Mount Kenya.

There is Alima, an orphan. She’s 11 years old and just starting the first grade because she had no one to walk her to school.

Dennis, 5, the child of a single mother, suffers from stomach aches, coughs, fevers and dehydration.

Doreen’s parents know she was born in September 2006, but can’t recall the exact date.

Edwin, 8, suffers from malnutrition. His mother is sick with HIV/AIDS and lives on handouts of corn and cornmeal. 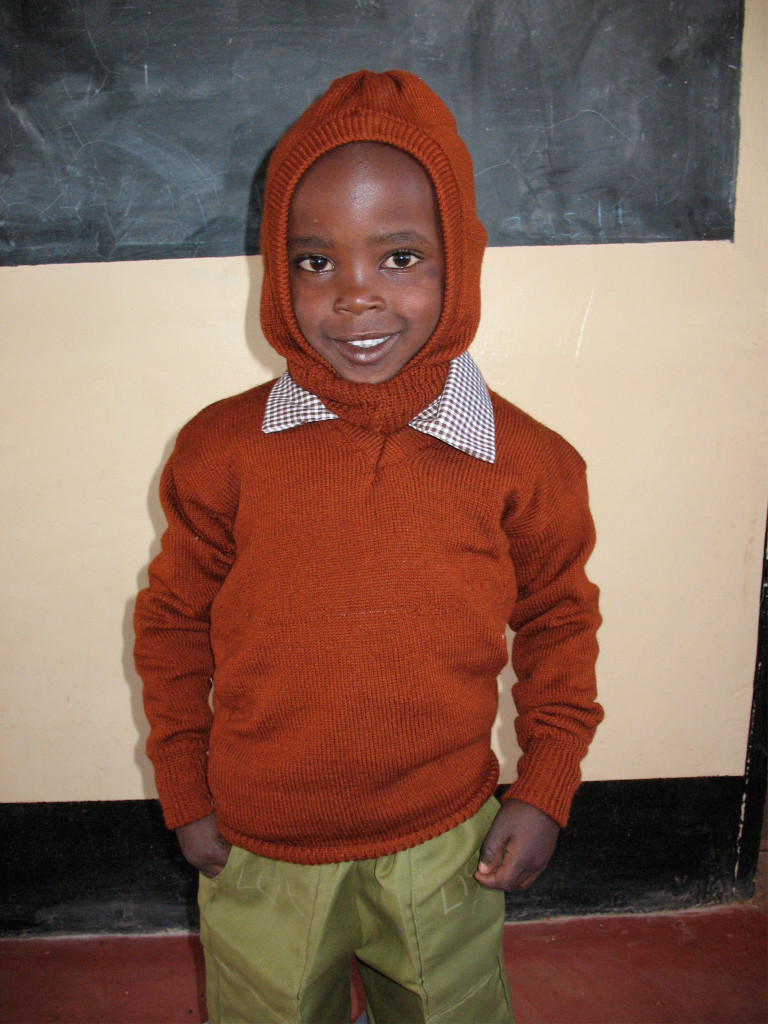 And there is little “Dodo,” a 3-year-old who slipped into the back of a nursery-school classroom and blended in with the sea of eager faces. The principal calls him one of her “stowaways.”

St. Elizabeth Primary School is run by the Sisters of St. Francis of the Neumann Communities, the order of St. Marianne Cope. Its leadership offices are based in Syracuse. Sister Joanne Gangloff, 72, is the school’s principal. She has worked in Kenya for 37 years.

In Timau, unemployment abounds, resulting in extreme poverty. AIDS has left many children abandoned or orphaned. Flu, colds, pneumonia and tuberculosis are common. Some children care for sick and dying parents; teens head households of younger orphans. Whole families rent single-room shacks or build mud and stick structures, sleeping on dirt floors at an elevation where temperatures can drop into the 40s at night.

St. Elizabeth School, thanks to the work of the Franciscan sisters, is an island in an ocean of poverty, hunger and despair.

Its modest campus is composed of a handful of cinderblock structures that frame a small playground in the center. A flagpole stands at its edge in a tiny picket fence-lined area that honors Wangari Maathai, a Nobel Peace Prize winner from Kenya.

Students in uniform, most with shaved heads for sanitation purposes, assemble in the yard, facing the flag, for morning announcements. Tiny swings in various states of usability are strung along the opposite side. A faded wooden structure resembling a school bus is the only other playground equipment.

At recess, the swings and old bike tires pushed with sticks are the recreation of choice. A few of the girls jump rope, using thin vines. Smoke rises from the kitchen’s wood-stoked stove most of the morning, and the electricity sputters on and off all day and all night.

But inside the buildings at St. Elizabeth are certified teachers who care, two meals a day and the chance at an education that could lift a child from the misery of poverty. The school has 180 students, 140 of them charity cases. Of the remainder, a handful of parents are able to pay. The rest are sponsored by individuals, many from Central and Western New York.

Children are given a porridge drink in the morning and a hot lunch in early afternoon. Once a week, they receive fruit with their lunch. Once a week, the meal includes meat. Some children file into the matron’s office on Monday afternoons complaining of a sour stomach. Gangloff believes it’s likely those children had little or nothing to eat over the weekend. 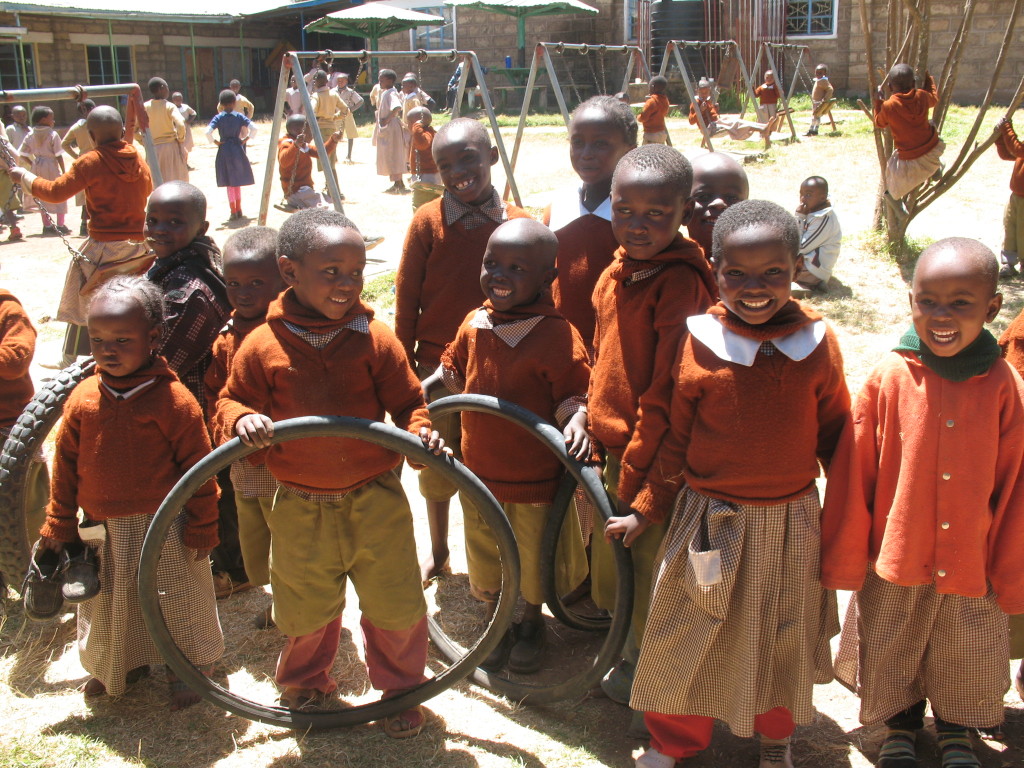 Little St. Elizabeth School has made a difference in the lives of countless children.
Photo by Toni Guidice.

Little St. Elizabeth School has made a difference in the lives of countless children. Three graduates are enrolled in law school. Other students are in computer programming, economics, accounting, tourism and teacher training programs. One is enrolled in the Buruburu Institute of Fine Arts. An orphan recently graduated with honors from Kenyatta University, with a degree in biochemistry.

When Serah Ngina’s father was murdered by robbers, her life turned upside down. Tribal traditions dictated that her mother marry her husband’s brother. Her mother fled the forced marriage with two small children. They slept on the sides of roads and begged for food. When Serah became ill with malnutrition, nuns at a clinic in Timau brought the bright but starving child to the attention of Gangloff, who worked to get Serah a sponsor and, eventually, gave her the money to attend the Amboseli Institute of Hospitality & Technology.

“I am grateful to Sister Joanne,” said Ngina, who has a good job with a Nairobi hotel and is helping to pay for her brother’s education.

After one of her students set his sights on culinary school, Gangloff kept the young man’s U.S. sponsor informed every step of the way. She met with the matatu driver so that the student, Alfred, would be allowed to bring his school knives onto the minibus. A sewing class in the trade school made him an apron and chef’s hat. He graduated and is employed at a Nairobi resort.

“Without Joanne’s help, none of it would have been possible,” said Marianne Clough, of San Francisco, Alfred’s sponsor. 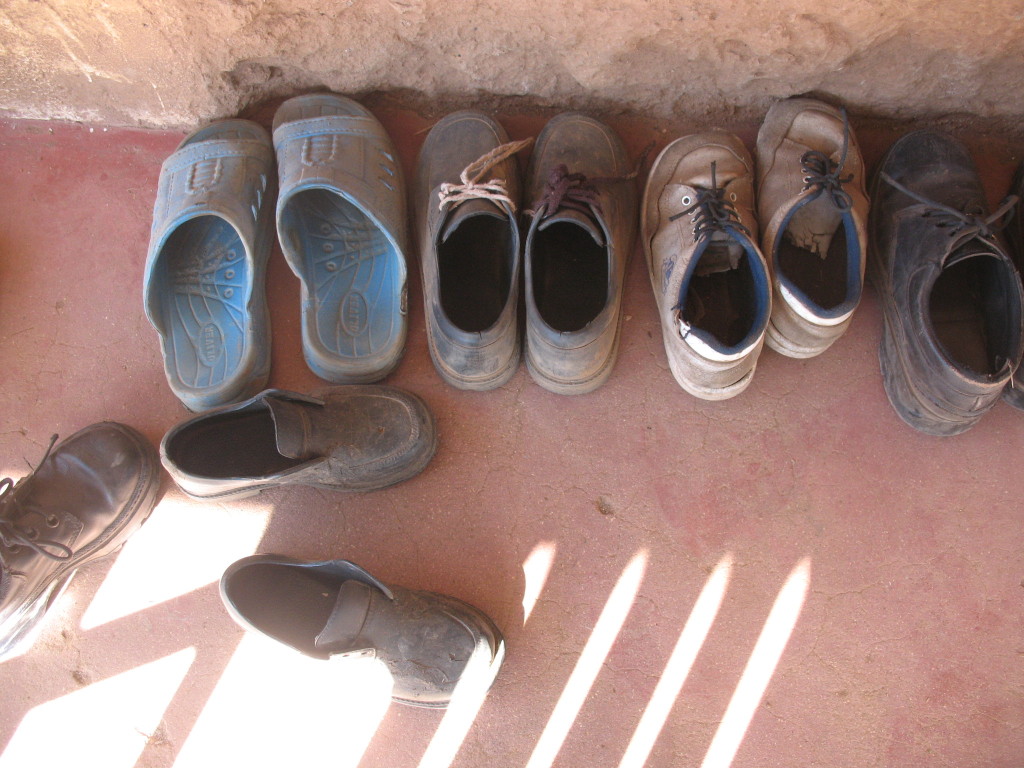 Each morning on arrival, they remove their shoes outside their classroom doors.
Photo by Toni Guidice.

St. Elizabeth’s children know the profound power of an education and they respect it. Each morning on arrival, they remove their shoes outside their classroom doors. Gangloss said it was never required or expected. But row upon row of tattered shoes line the hallways of the school at every grade level.

It appears to be a sign of respect, of reverence, for literally the chance of a lifetime.

How you can help

The greatest need is for sponsors. The children mentioned in this story are awaiting sponsorship.

Sponsorship for a grade-school child is $30 a month ($360 yearly). The child will receive a school uniform, supplies, shoes and any medical and dental care needed throughout the year. It also includes corn, beans and cooking fat to take home for the family.

Sponsorship for a high school student is $40 a month ($480 yearly). The child will receive some of the same benefits as the grade-school child. 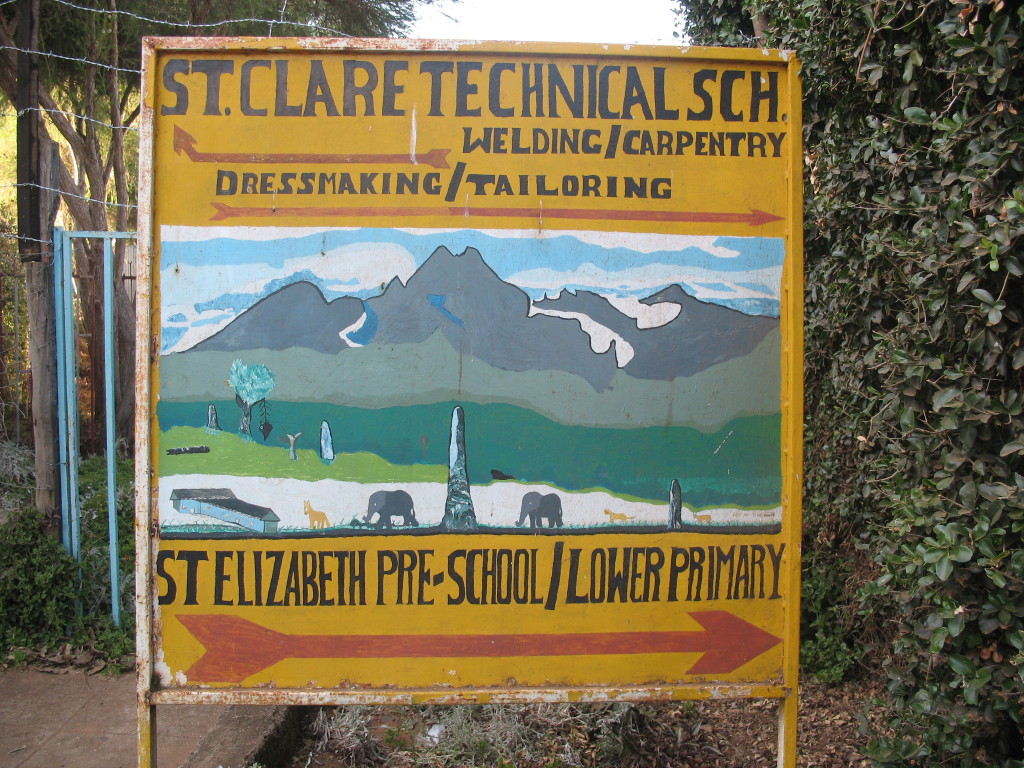 The greatest need is for sponsors. The children mentioned in this story are awaiting sponsorship.
Photo by Toni Guidice.

Due to long distances, transportation difficulties and safety concerns while walking, the school system in Kenya and in many parts of Africa has evolved into boarding schools for most high schools. This is nothing like the boarding schools in the States. In Kenya, boarding schools are large dormitories where double-decker beds almost touch each other.

The boarding system ensures that the children eat something three times a day. It also ensures electricity for evening studies, something most homes lack.

To sponsor a child, email [email protected]. Designate whether you would like to sponsor a boy or girl, primary or high school student.

The greatest need is at the grade-school level. St. Elizabeth is a Catholic school, but sponsorships will be given based on need, regardless of faith, with orphaned and abandoned children given preference.

Gangloff or Sister Bea Leising will send the child’s photo and family information by email or regular mail, if preferred, and will update sponsors periodically. Correspondence with the children is welcomed.