Mike Wheeler never intended to become a basketball coach. Soccer was Wheeler’s passion back in the day, when he was a three-sport athlete at Cicero-North Syracuse High School in the early 1990s. He went on to star at Monroe Community College in soccer, but his promising career ended after he broke his leg on a slide tackle.

Shortly thereafter, his aunt and former girls varsity basketball coach Gina Burrows encouraged Wheeler to become her junior varsity coach. Despite having no coaching experience, Wheeler gave it a shot. 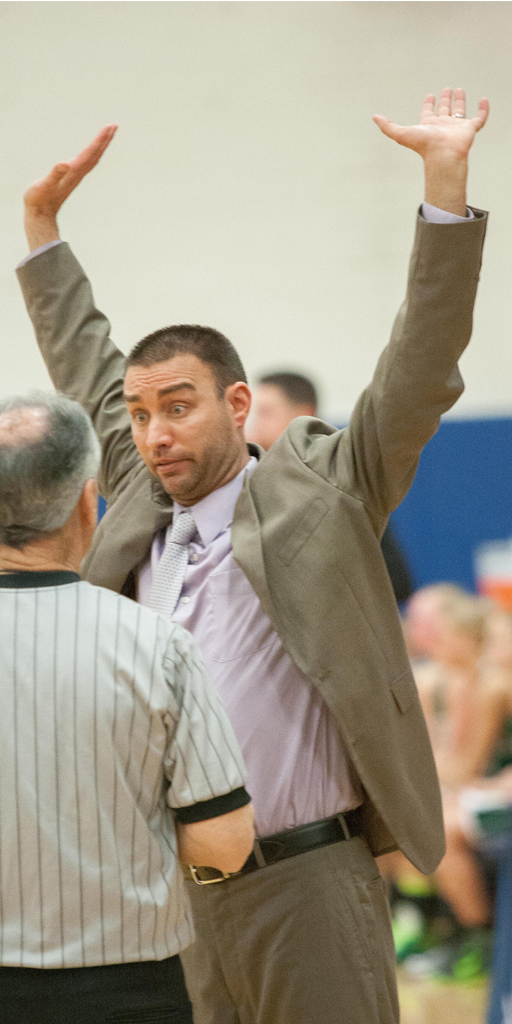 Twenty years later, Wheeler is one of the most successful junior college women’s basketball coaches in the country. In his 12th season at Onondaga Community College, Wheeler, 40, surpassed the 300-win plateau this year while guiding the Lazers to their seventh straight Mid-State Athletic Conference regular season title.

Wheeler’s up-tempo, high-energy style of basketball is what attracts many local prep stars to OCC. The Lazers rank first in the country, averaging 90 points per game, and have won 73 straight conference games over the past five years.

But sophomore guard Kayla Kibling (a Bishop Ludden graduate) says Wheeler isn’t focused only on Xs and Os. “He’s a great motivator, and he’s always pushing you to play your best,” Kibling says. “He’s always there for you, whether it’s in school or on the court.”

Wheeler, who resides in North Syracuse with his wife and two sons, reflected on his program and his career before the regional tournament.

On getting 300th career win at OCC: “Honestly, it makes me feel real old! I’m a competitive guy. I want my players to be competitive like myself. Those players are going to do anything you ask and are willing to work hard for you. That’s how you get to 300 wins.”

On his coaching style: “My philosophy is a high-scoring, high-energy game. I bring in players that are going to fit my system. I want to make the game fun. Having kids believe in your system is a big reason why we are successful.”

On the importance of preparation in practice: “Fifty percent of our practice is on transition work and continuously going from one drill to the next. All our drills are competitive. We work very hard against each other in practice. They really get after it. Everything we do is high energy.”

On wanting his players to enjoy the moment: “Players want to be a part of a successful program. Some of them didn’t have that in high school. The opportunity to be a student-athlete and play college basketball and possibly win a conference and regular season title is a great experience for them.”