Boeheim: “We turned it around last year with one game”

The Syracuse University men’s basketball team can only hope that history will continue its curious habit of repeating itself.

Last season, SU had a fantastic season derailed by a late-season slump. The 2012-13 Orange was 22-4 before losing four of its last five regular-season games, including an embarrassing 61-39 debacle at Georgetown in the regular-season finale.

But in the first round of the Big East Tournament, slumping 3-point shooter James Southerland sank back-to-back 3-pointers to ignite a comeback from an early 10-point deficit against Seton Hall. SU won that game and while it lost in the Big East Tournament championship game to eventual national champion Louisville, the Orange rolled all the way to the Final Four.

Fast forward to this season, when SU’s magical 25-0 start had fans dreaming of more than a Final Four appearance. But then the Orange dropped four of its next five games, including hard-to-swallow losses to Atlantic Coast Conference also-rans Boston College and Georgia Tech at the Carrier Dome.

Then in SU’s regular-season finale March 9 in Tallahassee, Fla., the Florida State Seminoles whittled what was an 11-point deficit to one, 47-46, with about 12 ½ minutes remaining. But slumping 3-pointer shooter Trevor Cooney made back-to-back 3-pointers to spark a 12-2 run that boosted the Orange to a 74-58 victory that seemingly put SU back on its early-season track.

“It was huge for us to get this,” Orange coach Jim Boeheim said. “Last year we went through this and we lost four and we went to Georgetown and tried to get momentum back and got beat by 35.”

“Momentum can be a funny thing,” Boeheim said. “We turned it around last year with one game, so you can do that.” 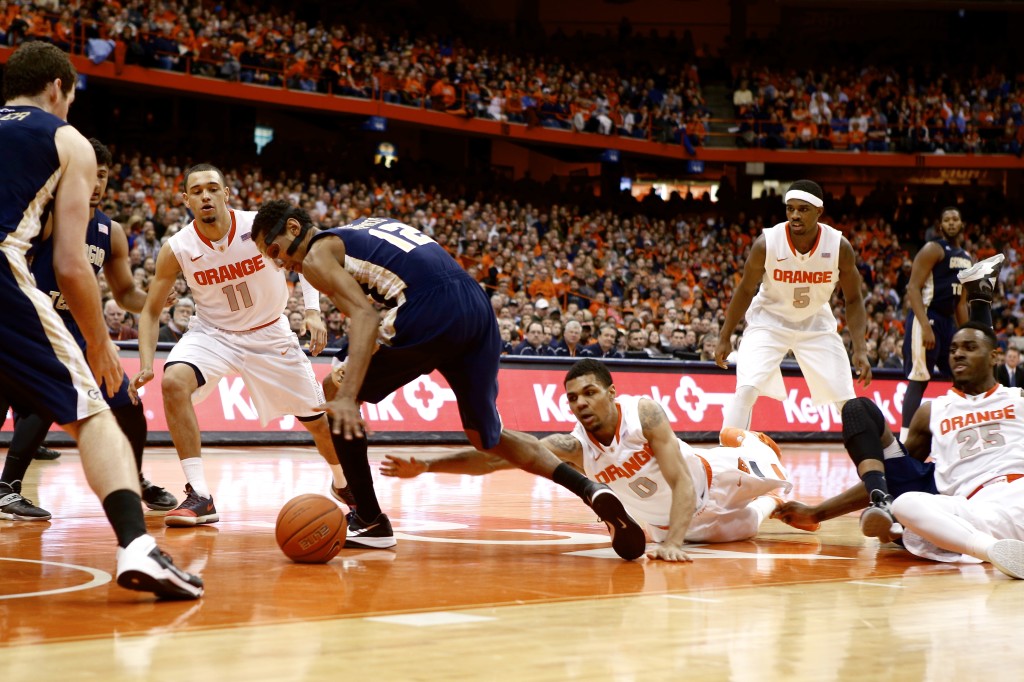 We’ll find out if the Orange can do that this year starting Friday, when SU plays its first game of the Atlantic Coast Conference Tournament at 7 p.m. in Greensboro, N.C. The No. 7 Orange, which finished 27-4 overall and 14-4 in its inaugural season in the ACC, is the No. 2 seed in the tournament behind regular-season champion Virginia.

The ACC Tournament championship game is at 1 p.m. Sunday, with the NCAA Tournament brackets announced later that day.

“Obviously, we haven’t cured all of our ills,” Boeheim said. “We need to go there, we need to work at what we’re doing and try to have a good experience in the tournament to get ready for the following week, which is what everybody’s trying to do.”

More specifically, the Orange needs to do whatever it can to keep sophomore forward Jerami Grant healthy for the next few weeks. Not coincidentally, SU’s slump coincided with Grant’s lower back injury that forced him to miss the second half of the Maryland and Virginia games, and all of the Georgia Tech game.

In those three games, Grant scored a total of four points and grabbed one rebound in 26 minutes. Against Florida State, Grant played 35 minutes and scored 16 points with eight rebounds. His ability to create off the dribble and drive to the basket opened the floor for C.J. Fair (22 points) and Tyler Ennis (16), who had been forced to play 2-on-5 on offense during Grant’s absence and Cooney’s slump.

“We’re a completely different team with Jerami Grant,” Boeheim said. “If he wasn’t able to go (against Florida State), we wouldn’t be very happy right now. He’s the key to what we do.”

The Orange dominated on the boards with a 43-24 rebounding edge against a Florida State team that features one of the tallest frontlines in the ACC. And the Seminoles, who entered the game leading the ACC in shooting at 46.8 percent, shot only 38 percent (19-for-50) against SU.

Florida State (18-12, 9-9 in the ACC) was also one of the hottest teams in the league with four wins in five games, and needed the win to keep its NCAA Tournament hopes alive.

“It was one of our better games this year,” Boeheim said. “When you slide a little bit and lose a couple, particularly at home, obviously you have a little moment there where you’re thinking about what you’re doing instead of just playing. And I thought (Sunday) we played.”

Before it worries about Round 3 against No. 4 Duke or a rematch against No. 5 Virginia, the Orange will likely have to get past North Carolina State – a team that gave SU all it could handle during their regular-season matchup.

On Feb. 15, SU needed two late steals and Fair’s layup with 6.7 seconds remaining to upend the Wolfpack 56-55 at the Carrier Dome.

N.C. State will first have to play the winner of the Miami-Virginia Tech game. The Orange defeated the Hurricanes 49-44 at the Dome and 64-52 in Miami this season, and SU’s only game against Virginia Tech was the aforementioned 72-52 romp.

As one of the top four teams in the ACC, the Orange received a double-bye for the tournament. SU’s opponent on Friday will have played at least one, and maybe two, games before facing the Orange. That may seem like an advantage for SU, but that wasn’t always the case when the Big East Tournament adopted the double-bye format after expanding to 18 teams.

“I never liked it,” Boeheim said. “You sit around, and we lost more than we won in those double-bye situations. You’ve got a good team playing for a game or two, they get their game ready and now you come in.

“In the old league I was in, we found that it was in the 40- to 50-percentile that the favored teams lost that had the double byes,” he continued. “So it is difficult when you don’t play and the other team kind of gets going, gets sharp. You just have to be prepared and try to avoid that.”