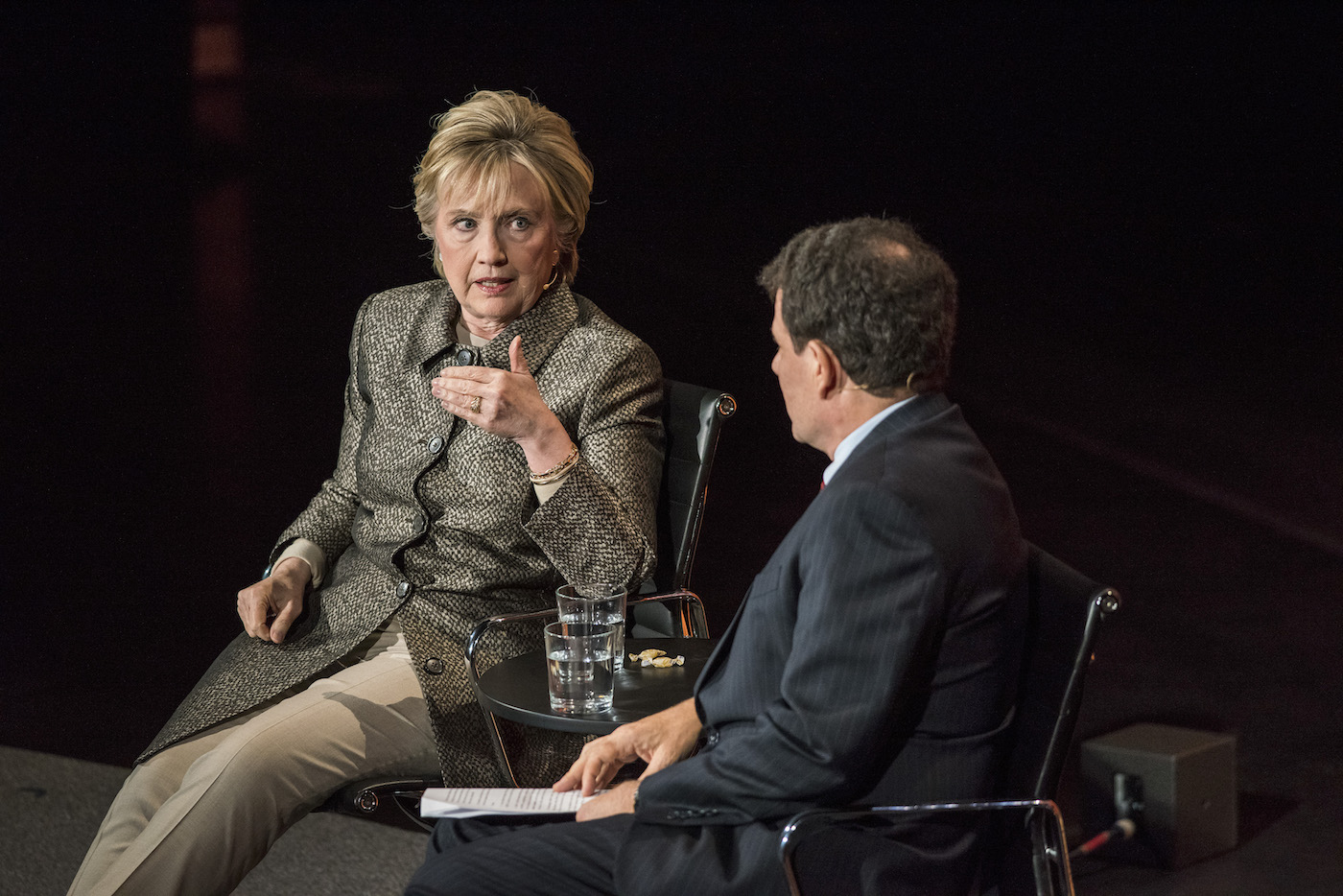 Former candidate has yet to understand why she lost the last election.

Hillary Clinton is interviewed by Nicholas Kristof at the Women in the World conference in the David H. Koch Theater at Lincoln Center in New York, April 6, 2017. Photo by Stephanie Berger of The New York Times
Share
Tweet
Share
Share
Email
Comments

Hillary Clinton has spent the better part of the last decade-and-a-half running for president. It’s been just six months after her stunning loss, but there are already many speculating that after two failed attempts, the former first lady may believe that the third time’s the charm.

Matt Latimer, contributing editor at Politico, wrote an audacious column in February saying she would certainly run again. He listed several concrete arguments regarding her recent actions as signals, like scaling back the involvement of the controversial Clinton Foundation, denying rumors that she would run for mayor of New York City, and a new book deal.

Normally there would be many reasons to suspect she wouldn’t run, like her age. She would be 73 in 2020, but that’s still a year younger than Donald Trump, already the oldest president ever elected. It’s also rare in modern times for a candidate who once received a main party’s nomination but lost a general election to run again and win both. The last person to do that was Richard Nixon in 1968. But in the age of Trump, it’s hard to judge political standards on history alone. Clinton still remains a popular figure and retains incredible influence over the Democratic Party.

The ill-fated candidate has made several returns to the limelight in recent weeks, still answering questions about why she thought she was defeated.

And that’s why she shouldn’t run for president again. Because she still doesn’t know.

Clinton recently spoke at the Women in the World Summit and was asked by New York Times columnist Nicholas Kristof about her loss. She admitted she could’ve done some things differently and said outright she was the name on the ballot, but she primarily continued to put the most blame on Russia and the James Comey letter that announced the reopening of an investigation of her emails just days before the election, a conversation that continues with Comey’s recent firing.

Now, she’s not wrong. There’s no doubt both of those contributed significantly to Trump’s victory. But she seems set that the Comey letter on Oct. 28 was the only nail in the coffin. She brought it up again recently.

“If the election had been on Oct. 27, I would be your president,” she said at the Women for Women International Summit in New York, again echoing her subscription to Five Thirty Eight pollster Nate Silver’s interpretation that had the Comey letter not been released, she would’ve won. Silver also said on Election Day that Clinton had a 70 percent chance of winning.

Such reliance on the Comey letter is curious, given that at the time of its release, Clinton said everyone had already made up their mind about where they stood on the subject of her emails.

And that collaborates with a CNN exit poll that found 62 percent of people decided who they were going to vote for by September, long before the first debate, let alone the Comey letter. Only 7 percent decided in the campaign’s final days.

Clinton lost because she was part of a Washington establishment that one too many people across the country had felt had abandoned them — many of them poor, rural and white. And that couldn’t compete with the populist outsider appeal to Trump, who she spent too much time talking about and too little time talking about what she stood for, all the while representing a party that, to many, looked like it didn’t represent the average American worker anymore.

That is all but common knowledge now. We’ve been over this. It’s no secret to anyone — except maybe Clinton.

Joe Biden understands it. At a crowd at the University of Pennsylvania in March, he said that “this is the first campaign that I can recall where my party did not talk about what it always stood for, and that is how to maintain a burgeoning middle class.”

Bernie Sanders understands it. He did all along, yet many even find him at fault because his base (young people) didn’t turn out to the polls for Clinton like they had for Obama. When asked how much blame Clinton put her loss on Sanders and the media, she said, “Well, how much time do you have?”

Voters are the last people that need blame. You have to earn their votes, not expect them.

You might ask, why bring this up at all? The election is over. Clinton lost. Let’s move forward. While that is true, the Democratic Party is going to make the same mistakes in future elections if they don’t learn from the major ones they made in 2016. And for whatever reason, they don’t seem to be doing that.

And Clinton’s the one still leading the charge. She said at the Women in the World Summit that she is now “part of the resistance” to the Trump administration.

Well, she was once the face of the resistance to Trump. That didn’t work out so well. So it is undoubtedly not in the Democrats’ best interest to try that again.

Trump once told us that when he became president, we would win so much that we would get tired of winning. If the Democrats continue forward with the Clintons still at the helm, they won’t have to worry about that, because they won’t be winning at all.