Curses, Foiled Again
Three Seattle teenagers tried to steal a woman’s car at gunpoint but failed because none of them could operate a manual transmission. “I got a five-speed in there,” victim Nancy Frederickson said, “and they couldn’t figure out how to get it going.” Surveillance cameras showed the suspects running away. (Seattle’s KOMO-TV)

P.C. Update
Minnesota enacted a law renaming Asian carp in response to concern by some people that the term casts people from Asian cultures in a negative light. The fish, which is native to Asia and was accidentally introduced to the Great Lakes, is now officially known as “invasive carp.” (CBS News)

Poop Scoop
Police arrested a Seattle woman who tossed cat feces, frozen chicken parts and a green liquid she identified as “a natural drink” from her fifth-floor apartment at participants and spectators for the Susan G. Komen Race for the Cure. The “hail of garbage” hit at least two people, said investigators, who reported that the unidentified woman told them “she had worked a long shift and was angry that the runners had woken her from her slumber.” (Seattle Police Department) 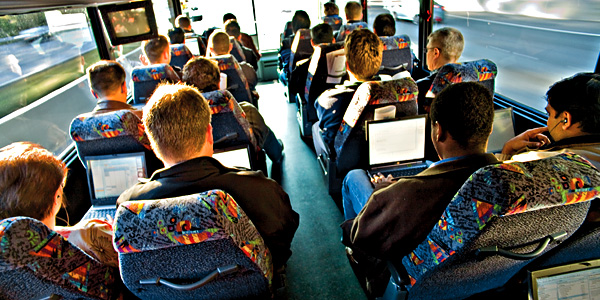 Success Breeds Failure
City buses in Saint John, New Brunswick, stopped offering free wireless Internet service to riders after it became so popular that the cost tripled. “There started to be a pattern of abuse develop, especially in the last six to eight months, where we had a lot of people streaming and downloading very extensive files, and the usage got very high,” Frank McCarey, general manager of the Saint John Transit Commission, said, explaining that Wi-Fi costs jumped from $1,000 to $3,000 a month. “You like to offer things, just as long as they’re not too expensive.” (CBC News)

Instant Karma
A worker installing signs limiting parking to 75 minutes on a downtown street in Santa Barbara, Calif., was ticketed for parking more than 75 minutes to do the job. “I was dumbfounded,” Dan Greding explained. “I said, ‘But I’m putting these signs up,’ and he (the officer) says, “Then you should know you can’t park here more than 75 minutes.’” (Santa Barbara’s KEYT-TV)

Zombies Can’t Fly
The federal government is authorized to list people on its no-fly list of “known or suspected terrorists” even after they’re known to be dead, according to a leaked document from the National Counterterrorism Center. There only has to be a “reasonable suspicion” that someone else is using their identity. (Washington, D.C.’s The Hill)

Litigation Nation
Clinton Tucker sued Benjamin Moore in Essex County, N.J., claiming that the paint maker fired him after his repeated complaints about their “despicable and racially insulting paint colors called ‘Clinton Brown’ and ‘Tucker Chocolate.’” Tucker’s attorney, Charles Schalk, insisted that the colors were named after his client, who identifies himself as an African-American homosexual male who worked at Benjamin Moore from June 2011 until this March. According to the company’s website, Tucker Chocolate was named for 18th-century Virginia judge St. George Tucker, whose house is one of the original Colonial homes in Historic Williamsburg. Benjamin Moore also said it sold cans of Clinton Brown, described as recalling a “perfectly balanced chocolate candy bar brown,” years before Tucker began working at the company. (Courthouse News Service)