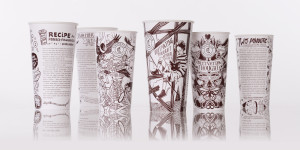 The Chipotle restaurant chain began featuring original stories by Toni Morrison, Michael Lewis, Malcolm Gladwell and Jonathan Safran Foer on its bags and drink cups. Foer, the vegetarian author of “Eating Animals,” proposed the idea to Chipotle’s CEO, Steve Ellis, who put him in charge of the project. “What interested me is 800,000 Americans of extremely diverse backgrounds having access to good writing,” Foer said, pointing out, “I wouldn’t have done it if it was for another company, like a McDonald’s.” (Vanity Fair)

Furniture in the News
French lawmakers on the National Assembly legal committee voted to alter the country’s 210-year-old civil code to upgrade the status of pets, which currently is “no different to a chair or a table,” according to Reha Hutin, president of the animal-rights group Fondation 30 Millions d’Amis (30 Millions Friends Foundation). If the full assembly approves the measure, cats and dogs will go from “personal property” to “sentient living being.” (France’s The Local)

Up in the Air
At least 150 commercial flights have landed at the wrong airport or started to land and realized their mistake in time, according to government safety data and news reports since the early 1990s. The biggest trouble spot is Moffett Field, a joint civilian-military airport in San Jose, Calif., where six flights heading for Mineta San Jose International Airport 10 miles to the southeast have tried to land. Most incidents occur at night, when pilots have disregarded their navigation equipment because the information didn’t match what they were seeing out their windows. “You’ve got these runway lights, and you are looking at them, and they’re saying, ‘Come to me, come to me. I will let you land.’ They’re like the sirens of the ocean,” said former Air Force pilot Michael Barr, who teaches aviation safety at the University of California. (Associated Press)

Second Amendment Meets the 21st
Wilshire Gun, a new state-of-the-art indoor firing range in Oklahoma City, has applied for a liquor license. “We wanted to build a place, the first one in Oklahoma, where you could go in, shoot, enjoy the retail area and then go to the café,” owner Jeff Swanson said, insisting that shooting complexes which offer customers more than just a place for target practice “is where the shooting sport is headed.” Swanson explained that Wilshire Gun’s staff intends to scan the driver’s license of customers who order drinks to assure that none would be allowed to enter any of the shooting facilities as a spectator or shooter for the remainder of the day. (Oklahoma City’s KOKH-TV)

Life’s Ironies
After Sir Young, 20, pleaded guilty to sexual assault in Dallas, Texas, he faced up to 20 years in prison. Instead, Dallas County District Judge Jeanine Howard ordered him to serve 45 days in jail and then “start 250 hours of Community Service at the Rape Crisis Center.” (Dallas Observer)

Problem Solved
Chinese authorities set up two giant water cannons to fight air pollution in Lanzhou, the capital of Gansu province. The long-range sprayers shoot a fine mist of tap water 2,000 feet into the air, where, it will “stick to the dust and form larger particles and fall back down to the surface under gravity,” according to Martyn Chipperfield, professor of atmospheric chemistry at the University of Leeds. He explained that although the falling mixture would reduce pollution, it could also cover people with mud. (Britain’s Daily Mail) 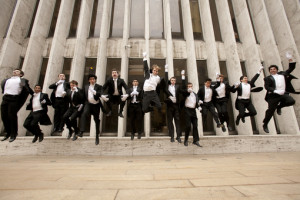 Yale University basketball player Brandon Sherrod left the team to join Yale’s a cappella glee club, the Whiffenpoofs. The group, formed in 1909, comprises 14 rising seniors who take a year off school to travel the world and perform. The 6-foot-6 Sherrod averaged 6.8 points and 4.3 rebounds with the Bulldogs, who finished this past season 19-14 and are expected to challenge Harvard for the Ivy League title next season. “This is supposed to be the year, and you want to play with your guys,” Sherrod said, “but the Whiffenpoofs is a once-in-a-lifetime opportunity.” (Associated Press)

On Second Thought
David Shaff, administrator of the Portland, Ore., Water Bureau, announced the city would flush 38 million gallons of treated water down the drain after surveillance cameras caught a 19-year-old man appearing to urinate into an open reservoir. Tests showed the water was safe to drink, but Shaff defended the decision: “My customers expect they will receive water that has not been deliberately contaminated.” Two weeks later, the city decided not to dump the water but instead divert it to an empty reservoir to “see how long it stays fresh and clear,” Water Bureau official Jaymee Cuti said. (Associated Press)

Second-Amendment Follies
Sheriff’s deputies reported that a group of friends at a home in Anderson County, S.C., decided to try on a bulletproof vest and have someone shoot them. Blake Wardell, 26, went first, but the bullet from the small-caliber handgun fired by Taylor Ann Kelly, 18, missed the Kevlar and struck Wardell in the chest, killing him. (Greenville’s WHNS-TV)

Slightest Provocation
Daniel Trent admitted stabbing a friend and his dog during an argument that began when Trent disputed his friend’s claim to the last beer in a 24-pack of Natural Ice. After Trent stabbed Mark Durham, 56, he said the victim told him to kill the dog, so he did. “I should’ve stopped drinking,” Trent said. (Ocala Star-Banner)

Get Off My Lawn!
Grumpiness officially begins for men around age 70, according to researchers who published their findings in the journal Psychology and Aging. Participants in the 15-year study reported feeling good about life until they reached 70, when their attitude soured for a variety of reasons, including declining health and cognitive functions and the loss of loved ones. The study’s lead author, Oregon State University gerontology professor Carolyn Aldwyn, noted grumpiness isn’t all bad, citing a study showing grumpy men in nursing homes “actually lived a little longer.” (NPR)