And Now Comes a Tough Stretch

The hope – no, make that the expectation – was that the Syracuse University football team would defeat the University of Maryland Saturday, Sept. 20, at the Carrier Dome to set up a primetime showdown of 3-0 teams with SU against No. 9 Notre Dame Saturday at MetLife Stadium.

In fact, SU Director of Athletics Daryl Gross told ESPN Radio before the Maryland game that wins over the Terps and Irish would make the Orange “relevant from a national perspective” for the first time since the early 1990s.

But now, after SU’s disheartening 34-20 loss to Maryland, it might be back to the drawing board on that national relevance plan.

“We were feeling good after the Central Michigan game; we came out with a lot of energy,” said Orange junior cornerback Julian Whigham. “It’s incredibly disappointing with the way things worked out.”

After escaping its opener with a 27-26 double overtime win against Villanova, the Orange appeared to get back on track Sept. 13 with a 40-3 rout of Central Michigan. Having thwarted Maryland 20-3 last season and with this year’s game at the Dome, it wasn’t a stretch to think the Orange would handle the Terps to move to 3-0 for the first time since 1991, when Paul Pasqualoni was in his first year as head coach and SU defeated the likes of Florida and Ohio State.

Looking at some of the statistics, you’d think it was an easy SU win. The Orange had 589 total yards to Maryland’s 369, and still lost by 14 points. That’s hard to do, unless you look closer at Maryland’s big plays: a way-too-easy 90-yard touchdown pass; an 88-yard “pick six”; and a blocked SU punt that led to another Maryland touchdown. Throw in a dropped pass here, a muffed interception there, and the flock of penalties and mistakes that killed scoring opportunities late in the first half and at the start of the second half, and that’s how the Orange lost a winnable game.

All of those mistakes beg the question: Did the Orange look past Maryland to Notre Dame?

“No, no, no, no, we were all focused on Maryland,” senior offensive tackle Sean Hickey said, saying “no” four times for emphasis. “If we would have come out and played horribly, then you’d think that, but it was a mistake here and a mistake there.”

It’s true that you don’t play horribly and outgain your opponents by 220 yards. But it’s also true that the way you become nationally relevant is to consistently win these kinds of games.

“If you overthink it, maybe,” SU coach Scott Shafer said when asked if the Maryland loss was particularly disappointing given the opportunity provided by this week’s date with Notre Dame. “But that’s not how we operate. If you did, you’d drive yourself nuts. I don’t need to drive myself nuts.” 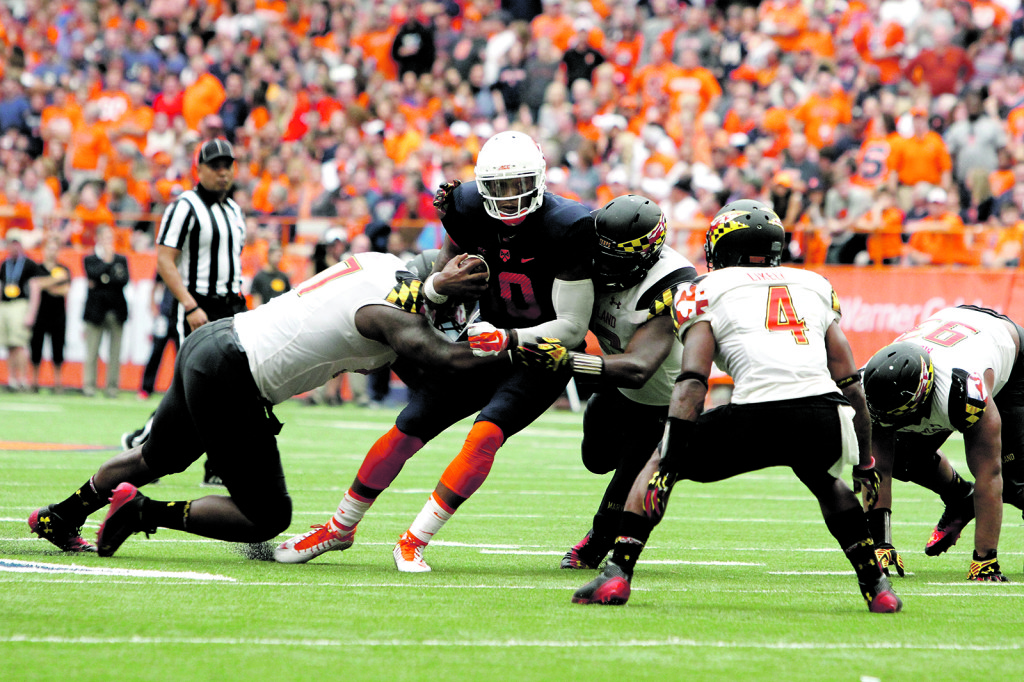 Here’s what will drive any coach nuts: A three-week stretch of games against the ninth-ranked Irish, a Louisville team that’s just out of the top 25, and a No. 1 Florida State team that survived Clemson Saturday without suspended quarterback Jameis Winston. That’s what the Orange faces over the next three Saturdays, when it will try to keep its head above water and perhaps steal a win to keep its bowl hopes intact.

Notre Dame, perhaps the most storied program in college football, had the week off after wins over Rice, Michigan and Purdue by a combined 109-31. While the nationally televised game on ABC is technically a Syracuse home game, there will undoubtedly be more Irish fans at MetLife Stadium because of Notre Dame’s national following.

“We’ve been there (in big games),” SU senior linebacker Cam Lynch said. “We beat Louisville here (at the Dome), we beat West Virginia here. We play big teams at MetLife (USC and Penn State the past two years). We’ve been there before. It won’t be a shock to us at all. We will go out there and execute, get to the (Irish) quarterback and play assignment football. We will do well.”

Safety Darius Kelly, another senior who’s been through those big games, said the message he’ll send to his teammates is this: The only way to erase the bad taste from the Maryland game is to play well and beat Notre Dame.

And until that happens, no more talk about national relevance.

“We’re primetime on ABC, but we have to concentrate on this week, and now we’re going to look at it as an opportunity to step on the field against a top team in the nation,” Kelly said. “We’re going take it as full speed as we can.

News and Blues
I say ISIL, You Say ISIS (Let’s Call the Whole Thing Off)
To Top