Well it’s time to look at New York State’s UFO sighting tally for 2013. Some weeks ago, in my article “UFO Sightings in New York Over 63 Years,” I showed you a few sightings charts that indicated that 2012 had an unusually high number of UFO sightings for New York. The questions raised by a lot of people in UFO research circles; was 2012 it a fluke? The numbers are in for 2013, so let’s look at the charts. 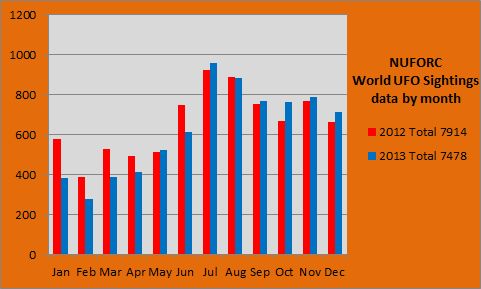 First let’s look at the worldwide sightings. For this chart I used National UFO Reporting Center (NUFORC) data. It should be noted that the world average yearly sighting numbers prior to 2012 generally leveled around 4500 sightings per year. Then in 2012 the world numbers spiked to 7914, or nearly double the previous average. 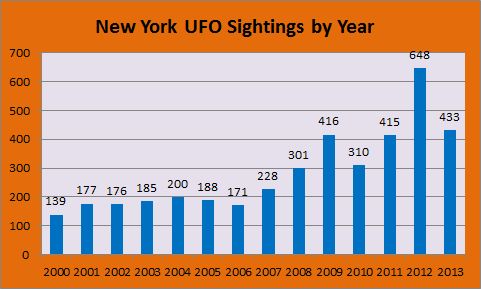 Please note on the chart that since 2008 our state has averaged 300 to 400 sightings yearly. I believe that this past year’s 433 sightings were actually on trend. In my humble opinion I think that the high 2012 New York UFO sighting numbers were a fluke. Only time and more sighting reports will tell for sure.

All of this boils down to the need for folks to honestly report what they see. Too often in the past folks have seen some amazing things but were fearful they would be ridiculed for reporting it. Talk to your older relatives, do they have some remarkable stories about sightings that they’ve had when they were younger? If they do, you should write it all down. Record all of it with as much detail as they can remember: when, where, what – did it look like, what did it do, what was your relative doing when it happened etc. Then after you get it all sorted out, post it on one of the national databases either NUFORC.ORG or MUFON.COM. Both of these national databases handle personal information with a high degree of confidentiality.

In fact, it doesn’t have to be a recent sighting. Both databases are full of reports posted in the past few years that concern UFO sightings many years old. Many of the interesting stories I have shared with you in recent weeks happened many decades and even hundreds of years in the past.

For example: My recent very popular account of the 1939 New York Worlds fair sighting was only posted in 2005, about the time that the NUFORC.ORG became web enabled.

Remember, even older stories have value and are important to our legacy of human experience. It’s important that we document these things. I believe that all of this will be important one day soon. For one of these days, there’s going to be an incident with an alien craft, something that can’t be denied. The kind of incident that will go viral and everybody is going to know about it and because of that the truth will finally be forced out into the open.

On that day, Disclosure Day, a lot of people are going to want to hear about the stories of sighting encounters that their friends, neighbors and relatives had in the past.

For on Disclosure Day, the seemingly crazy, silly subject of UFO sightings and encounters will become real for everybody and change the way we think about our human species in the grand scheme of the Universe.

Let’s look at some recent 2014 UFO sightings from here in New York:

7 Jan. 2014 at about 6 p.m. an amateur astronomer in Lagrangeville was taking out the trash, when he noticed an orange-reddish light that he initially though might be a planet but he was puzzled as to which one. He grabbed his cellular device and pulled up a star map app. When he glanced up for another look the orange-reddish light started moving up then down, then just darted around until it disappeared.

12 Jan. 2014 at about 8 p.m. two Corning north side residents noted a bright disk shaped object hovering in the sky to the south east of the city, toward Gibson. The object from their vantage point was not as big as the moon in the sky but very nearly. It was bright white but cycled with changing colors turning a pinkish then blue then white again. They watched it for a good five minutes before it turned blue and “winked out.”

13 Jan. 2014 at about 10 p.m. in Queens a worker on a break saw a red light moving across the sky. The more he looked at it the more he realized it wasn’t a conventional aircraft. Several other people came out and saw the red light. Suddenly it just “zipped off” and was gone.

17 Jan. 2014 at about 6:30 p.m. a trained observer in Corinth noticed several yellow-orange lights flying in formation and moving in a west-southwest direction. The woman says that the formation sort of looked like the big dipper. She further states that these were not conventional aircraft.

21 Jan. 2014 at about 2 a.m. a Vernon resident was getting ready for bed. As he glanced outside to check the winter he saw a bright blink across the street near his neighbor’s house. The object is described as having bright green lights that had a circular motion.

27 Jan. 2014 at about 8:45 p.m. a Levittown resident observed an object with red and green lights. At first she thought it was just an airplane until it suddenly went upward and started hovering.