It was long, grey and round on the ends but she remembers that the windows weren’t like a regular bus.

It was an overcast Thanksgiving Day in 1934. Six year old Edith, along with her parents had spent the day in Binghamton at Grandma’s house for Thanksgiving dinner. They were driving towards their home close to Nichols in Tioga County. The road they were on was the old highway just past the Owego narrows near Lounsberry. Their car drove up onto a ridge and a rise in the road; it was there that Edith saw a bus in the cow pasture below or something that looked like a bus. She started yelling for her father to look. Being a responsible driver he pulled the car over to see what was upsetting the 1st grader. She told him that there was a bus out in the middle of the field.

Her dad decided to get out and look. As he looked over the farmer’s fence something got his attention so he climbed over the pasture fence to get a closer look. Of course the precocious Edith jumped out of the car and scrambled over the fence and caught up with her father. As she joined her dad in the cow pasture she could see a huge object that sort of resembled a Greyhound Bus. It was long, grey and round on the ends but she remembers that the windows weren’t like a regular bus. These windows were darkened and bulbous; she could even see some shadowy forms moving around inside. 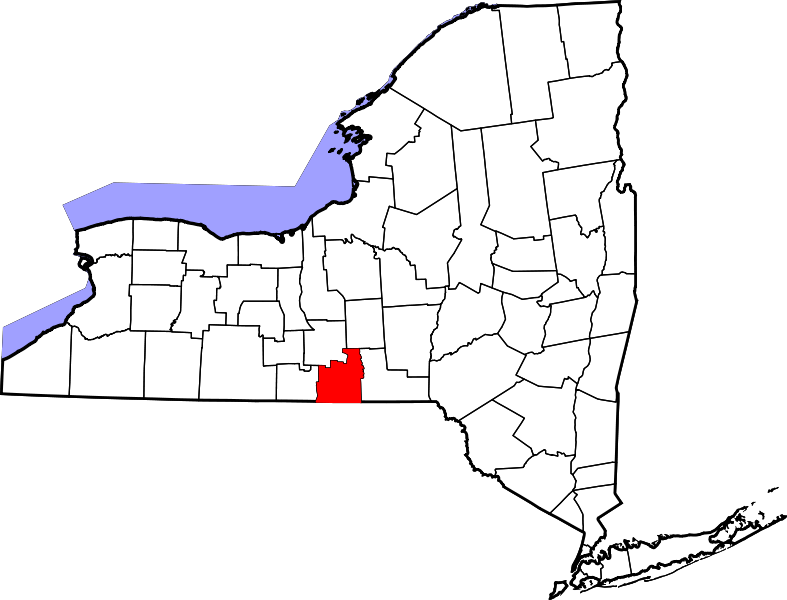 Back in the car her mother was screaming at the top of her lungs for the two of them to come back to the car. Edith’s dad put two fingers in his mouth and blew two vigorous whistle blasts.  A few moments later the bus like object suddenly rose up and hovered above the pasture. In full view of both her dad and Edith, the huge grey object disappeared or as Edith told me, “it just melted away.”

Back in the car her mom was still screaming for them to come back. Both Edith and her dad climbed back over the pasture fence and headed back to the car. Edith told me that she tore her dress climbing that fence. Both dad and Edith had cow poop on their Sunday shoes but Mother was too frightened to notice.

Edith said that her scared mother never stopped shouting until they got home. Of course all the way home Edith kept asking her dad, “What was that?”  Finally her dad yelled, “Shut up.” Edith got quiet and minded her father, but her mom didn’t.

During our recent telephone conversation, 85 year old Edith told me that neither parent would ever talk to her about what they saw in the cow pasture on that Thanksgiving so long ago. Edith told me she’s a big fan of New York Skies! Thanks for sharing Edith.

Let’s look at some recent UFO sightings from around New York State:

30 Dec 2013 at about 7 p.m. a motorist and a friend were driving near Albany on Interstate 87 when they noticed what they thought was an airplane. That is until they noticed that the object was hovering in place. The passenger stuck her head out the window to take a good look and saw the huge profile of a triangular shaped object. She reports that it had lights that made it easy to recognize the shape. As they drove under the silent triangular object, they noted suddenly that it was no longer visible.

31 Dec 2013 at about 8:40 p.m. a motorist driving on Interstate 87 near Westport, spotted two red glowing orbs. Initially they were in front of the car then flew off to behind and seemed to follow foe a short while before silently disappearing.

4 Jan 2014 at about 10:30 p.m. it was a clear night in Queens. A resident saw what he thought was a Roman candle rise up into the eastern sky but the object did not dissipate. After a few moments of looking at the glowing object he noted that it was “stingray” shaped. After rising up the object flew off toward the north and disappeared behind a building.

4 Jan 2014 at about 11 p.m. a Brooklyn resident on her balcony for a smoke suddenly saw a bright white light appear out of a club and drift toward her house. She called to a friend in the house and together they watched the ball of white light silently “glide” over the house before disappearing.

10 Jan 2014 at about 12:12 a.m. in Baldwin, a resident spotted an orange fireball over the south shore of Long Island. He watched it about half a minute before it just disappeared.

12 Jan 2014 at about midnight a Northport resident witnessed an orange orb apparently leading a diamond shaped object. The diamond object was described as glowing orange with green and white lights in middle. Both objects were last seen heading north over Eaton’s Neck, NY.

12 Jan 2014 at about 7:30 p.m. a Rochester couple witnessed an orange glow in the southwest sky. The glow became larger as it got closer. The glowing object made no noise as it approached and flew directly over them. The orange ball like object continued on north easterly heading traveling at a fairly high rate of speed.