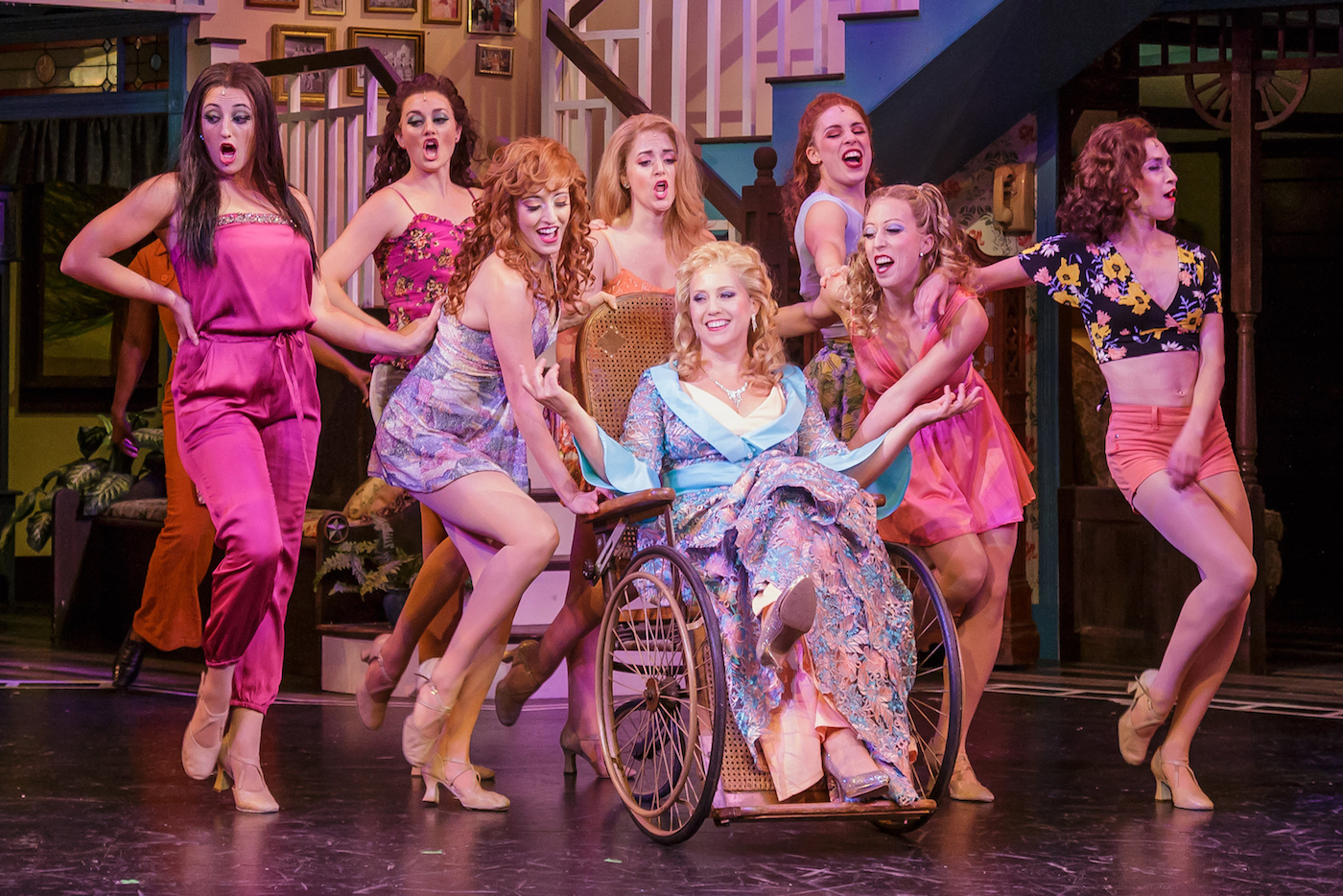 The oldest profession takes the stage at Merry-Go-Round.

Auburn’s Merry-Go-Round Playhouse has a well-established regional reputation and it often seems ready for a national ranking. Consider the credits of director-choreographer Parker Esse, in charge of The Best Little Whorehouse in Texas, which runs through Wednesday, Aug. 23.

Not only does Esse have golden Broadway and regional credits, but this summer he has also worked on Oklahoma! at Cooperstown’s Glimmerglass Festival and Me and My Girl at the Shaw Festival in Niagara-on-the-Lake. From what we see on the stage in Auburn, Whorehouse compares well with what one sees at both of those companies.

Now almost 40 years old, Whorehouse has special links to Auburn as local-dancer-made-good Thommie Walsh was part of the original production. The frequently edgy, satirical stage show should not be confused with the saccharine 1982 movie starring Dolly Parton and Burt Reynolds. The glamorous female lead, Miss Mona Stangley (Sally Wilfert), the house’s madam, is an honest, nurturing businesswoman. Similarly, the male lead, Sheriff Ed Earl Dodd (Ryan Andes), has a keen eye for injustice within and without the law but is going his own way. Despite a transparent shared deep affection, this is not their love story.

Even so, Wilfert’s Mona and Andes’ Sheriff are at the core of the action. As compelling as their musical numbers are, both portray characters with more depth and nuance than the cartoons they may sound like or what the movie made of them. The show may be a comedy, yet both leads are contending with life-changing crises.

A magazine article by the late journalist Larry L. King (not the old guy who used to be on CNN) inspired Whorehouse, and most of the characters and themes in it have counterparts in real life. The villain of the show is arch-hypocrite Melvin P. Thorpe (sharply played by Jamison Stern), a muckraker decked out in a discount white toupee appearing on Houston television. His resemblance to the actual TV reporter Marvin Zindler was close enough to invite libel suits. In fitting with the construction of the show, he makes his accusations in the upbeat production numbers “Watchdog Team,” and even better, “Texas Has a Whorehouse in It,” with the female chorus, now called “Dogettes,” holding oversize flashlights.

Whorehouse teases and stings. It does not harangue. One of the most hilarious numbers is “The Sidestep,” in which the evasive governor (Neal Mayer), Senator Wingwoah (Brad Rupp) and aides all sashay away from any scrutiny that would link them to Miss Mona’s Chicken Ranch, even though they’ve long afforded themselves of the pleasures to be purchased there.

Neither does Whorehouse meditate on the personal or health costs of legalized prostitution. We enter the Chicken Ranch with potential employees Dawn (Lizz Picini) and Shy (Rachelle Rose Clark) seeking places on the roster. Shy, as the name signals, is completely inexperienced in the ways of the flesh. Miss Mona, whom a narrator tells us was once a working girl before becoming management, is immediately accepting and supportive in the first big production number, “20 Fans.”

Scenic designer Chad Healy’s large set makes the action look more massive than it is. Not only is there a wide dance area downstage, but the Chicken Ranch exists on three floors, with bedrooms at left and right and an intriguing stairway leading up to yet another unseen floor. Sometimes the bedrooms are covered with translucent scrims so that the activity going on can be seen in silhouette, and Jose Santiago’s lighting design makes sure we know. Thus, a show about the sex business remains PG rather than becoming R.

Few numbers in Carol Hall’s score — well-served by music director Corinne Aquilina, leading an orchestra of nine — have gone on to have a life of their own. Probably the best-known is the country-themed “Hard Candy Christmas,” delivered by Angel (Siri Howard), the Ranch girl we have come to know best; the Sheriff’s understated love song, “Good Old Girl”; and Miss Mona’s farewell, “The Bus from Amarillo.” Each one is superbly delivered and dramatically affecting.

Two less-known numbers come alive as they move the action and define mood. One is “Twenty-Four Hours of Lovin’” from Jewel (Crystal Sha’nae), with a welcome throbbing blues beat in the otherwise all-white ranch. The other is the plaintive “Doatsey Mae” in the Texas Twinkle Café by the hapless, hard-working waitress (Emily Drennan). She says of Miss Mona, “At least she doesn’t work on her feet,” the script’s allowance that so-called “honest labor” can take a lot out of a girl.

Finally, loud applause for the production’s burly, deeply masculine male chorus appearing in many changes of costume. Its “Aggie Song,” with some judicious editing, would do Texas A&M University proud.