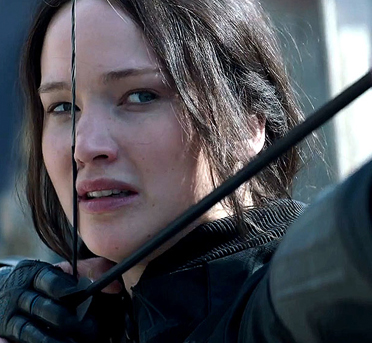 Will Katniss Everdeen ever be handed too much than she can handle?

Three Hunger Games installments down, one to go. And the bright-eyed girl-woman played by Jennifer Lawrence is still up and running and finding all those awful things that novelist Suzanne Coillins could throw at her.

In The Hunger Games: Mockingjay — Part I, we find Katniss facing the catastrophe wrought from the arrow that pierced the force field in The Hunger Games: Catching Fire. Her love Peeta is gone, dead she fears, left on the field of evil. Of course, the many fans of this blockbuster series know all of this and more because they’ve read the three novels by Collins on which the three movies released so far and next year’s planned finale were based upon. Maybe not. But in the very least, they’ve seen the first two installments. And yet everybody in the Sunday late morning matinee at  Shoppingtown — where showings of the 2 hour, 2 minute film were scheduled to start every 30 minutes — hung on the balance of every scene.

I didn’t know what the heck was going on.

I caught The Hunger Games, the 2002 starter, on NetFlix, anxious to see what the buzz was about. On my flat screen a year after its release, I found it sort of dark, kind of long, and not exciting enough to make me choose Catching Fire as the one movie to watch when it opened the weekend of Nov. 22, 2013. I chose Vince Vaughn in the comedy Delivery Man instead.

Mockingjay, though, was the only major opener this pre-Thanksgiving weekend.

And so I watched 24-year-old Lawrence worry and fret and fight for family and honor and district, taking on the persona of a heroine somewhat younger. (Thank you screenwriters Peter Craig and Danny Strong and director Francis Lawrence for working in the line for character Effie Trinket — holy cow, great job by Elizabeth Banks — chiding makeup artists for making Katniss look 35 for her promo video.) I watched Liam Hemsworth stay loyally by her side as Gale, and Josh Hutcherson twist on the screen as dumbstruck Peeta under the thumb of Donald Sutherland as conniving President Snow. I watched Julianne Moore as righteous President Alma Coin stand up for Panem under the guidance of Philip Seymour Hoffman as wise Plutarch Heavensbee and Woody Harrelson as dry Haymitch Abernathy.

And, standing on its own two feet, without the back story of the first two or the thought of another sequel to come, this Mockingjay kept my attention just fine, thank you.

It still was mighty dark. Most of Katniss’ brethren were living underground. And when they ventured out into the sun, they had to survey damage done in the fight and use their wits and weapons …

But when the credits started to roll with a one-sentence tribute to the late Hoffman, who died in February, I felt like I’d been brought up to speed. I might even be looking for Catching Fire on NetFlix soon.

A critic passed who wrote many film opinions for L.A.
Critic agrees: Selma could be about today
To Top