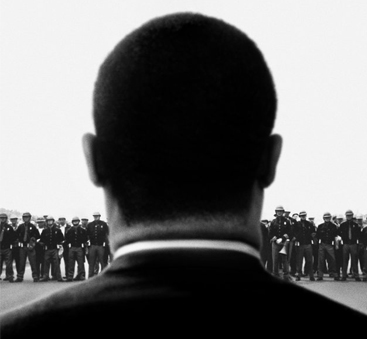 While writing for screencrush.com about the new movie Selma Tuesday, reviewer Mike Ryan quickly connected the dots between the biography about Martin Luther King Jr.’s civil rights march in 1964 and this week’s news in Ferguson, Mo., that charges were not brought against the policeman who shot and killed teenager Michael Brown.

Ryan wrote that when he saw the film at its New York City premiere Monday night, cinematographer Bradford Young “made a reference to this film being about today as much as it’s about 1964.”

Young was quoted in a story by Christopher Rosen for The Huffington Post that indeed he has to balance anger about issues he sees as a black man in America today while he shoots movies.

Ryan wrote: “When Young said those words, Ferguson was already starting to feel like a distant memory. … I still had a naive belief that justice would be served. Like everyone else, I don’t know what happened the day that Michael Brown was shot and killed, other than Brown was unarmed and shot many, many times. I believed there would be a trail to at least hear both sides of this case. I was wrong.”

Ryan then tells of what brought King to Selma, Ala., in 1964, at the heart of the movie directed by Ana DuVernay: A rigged system that does not allow Annie Lee Cooper, a black woman, to register to vote. “While watching, a viewer — let’s be honest here, a white viewer, me,” Ryan writes, “might at least take solace in the fact that these events at least took place 50 years ago. That this really couldn’t happen today. Naive.”

Ryan was born in Creve Couer, Mo., 11 miles from Ferguson, across Delmar Boulevard, which he calls “the most divisive dividing line in the United States.”

“It’s still where I’m from, and it brings me to tears to watch what’s happening,” he writes.

Selma comes out in limited release on Christmas, and rolls out nationally on Jan. 9.

“I hope we see a lot of Bradford Young and the director of Selma, Ana DuVernay, over the next few month. …” Ryan writes. “In making a movie about Martin Luther King Jr. they made a movie about today. Literally today. This day. …”

Mockingjay keeps the Hunger burning
The Penguins of Madagascar are cute, but that’s about it
To Top