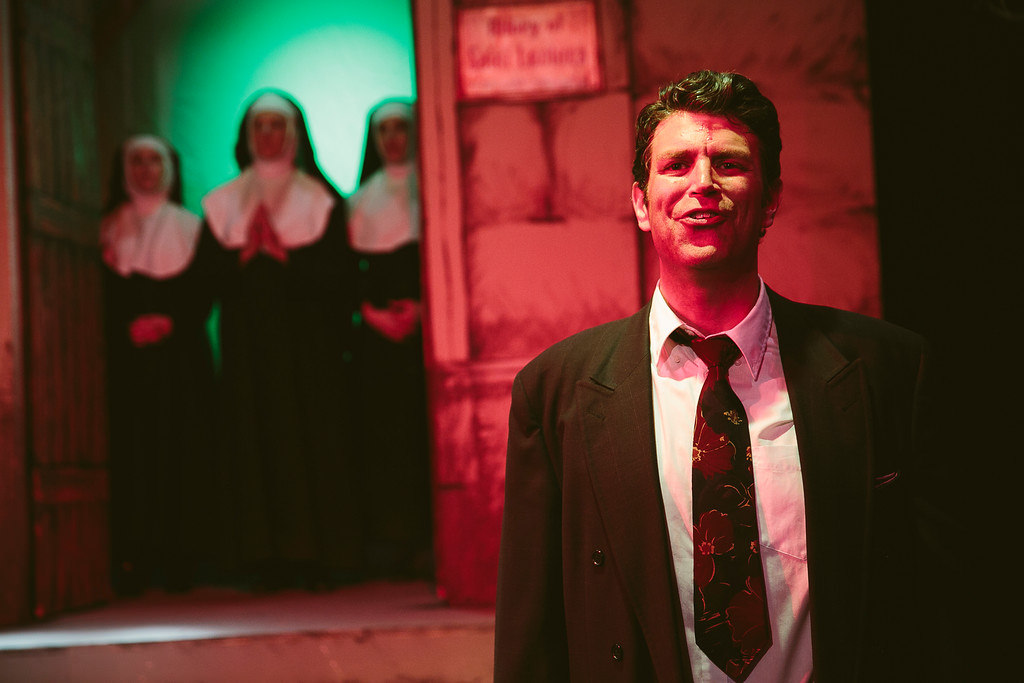 A modernized “Macbeth” is now showing at CNY Playhouse.

William Shakespeare’s Macbeth, now on the boards through Saturday, May 21, at the Central New York Playhouse, is a violent tragedy.

Even though it is not the bloodbath of Titus Andronicus or the last act of Hamlet, it delivers plenty of rough, arresting moments. The wanton murder of innocent Lady MacDuff (Lynn King) and her son (Collin Dean) is the most unsettling scene of any local show in recent years.

Director Dan Rowlands did not want to deliver a costume drama with colorful kilts. Instead, he wants to bring the drama into nearly our own times. This is what happens when a man and a woman let obsessive ambitions get the better of their judgment.

In order to bring Macbeth closer to us, director Rowlands has reset the action in what looks like Al Capone’s Chicago (lots of fedoras) extended into The Godfather movies. The three Weird Sisters (Marguerite Fulton-Newton, Katie Deferio and Amaya Eckyl) are now wimpled nuns toiling in front of an urban convent. Putting aside the Mario Puzo novel but remembering how movie director Francis Ford Coppola staged the final scene in The Godfather, Rowlands is clearly onto something.

But there are moments when the anomalies distract. Are these Scottish thugs, with names like MacThis and MacThat, really kissing the rings of the powerful as well as each other’s cheeks, like Sicilians? Similarly, the extensive use of composer Nino Rota’s Godfather score, one of the most familiar ever written, reminds us of its origins even as the plaintive trumpet sets the right tone.

Unlike earlier attempts to turn the Scottish usurper into a gangster, like Paul Douglas in the 1955 movie Joe MacBeth, Rowlands is not adapting but rather retaining the characters pretty much as your teachers explained them to you and honoring the poetry. He has lined up a company who knows how to deliver the lines trippingly on the tongue, and overall the level of diction is higher than in his Romeo and Juliet from May 2015. This means not only the leads but all the supporting players speak eloquently.

Rowlands’ most audacious casting choice is giving the lead to Nathan Faudree, a popular performer whose history with the Bard is less than happy, such as the February 2011 Syracuse Shakespeare Festival production of Antony and Cleopatra. Faudree is a tall, masculine, good-looking guy whose body, when shirtless, comes with its own menacing tattoos, which are useful for the conception here.

Faudree smiles easily. It takes us a moment to realize that Rowlands is taking advantage of Faudree’s default persona to give this Macbeth a new stamp. This one is heedless and reckless, an interpretation fully supported by the text.

The second is the blowout battle at the end, with guns, knives and fists. This laying on of Macduff (an excellent James Uva) really rocks the stage, even if we know how it is going to come out. Applause here for fight choreographer Derek Potocki, who doubles as a murderer of Lady Macduff.

Rowlands made a much safer choice in casting Katie Gibson as Lady Macbeth, one of the greatest female roles ever. Gibson, with a passel of Syracuse New Times Syracuse Area Live Theater (SALT) Awards, is arguably the most admired leading dramatic performer in community theater, of her gender and age group. There is, however, no precedent for such a creature of the worlds of either Al Capone or the Corleones.

Instead Gibson and Rowlands appear to have drawn from film noir, a la Barbara Stanwyck: She’s a no-nonsense gal who has as many cajones as her mate. Gibson’s Lady Macbeth is also sexy, even when wearing a beaded black turban. (Applause also for costumer Capri Merrifield.) The Lady’s ego is chilling, more self-assured than her husband’s.

The other 20 players are anything but chopped haggis. The No. 1 scene-stealer is bald, eye-patched Simon Moody as Macbeth’s strident armorer Seyton. Moody has the ability to look quite different in each role, and he’s never been more powerful than here.

Admirable in a different way is red-bearded Jeremiah Thompson as Banquo, the betrayed ally. One of Rowlands’ best stagings is the appearance of Banquo’s unwanted ghost at the banquet. The director uses not one but two different doorways with an opaque scrim that reveals the dead man when lighted. As there are two, Macbeth is reminded of his guilt no matter which way he turns.

William Edward White brings his formidable presence to King Duncan, the portly monarch Macbeth thinks he can deflate. Contributing distinctively to the plot are Sean Pratt as the harsh, aggressive Ross; Michael King and Issaiah Vergara as Ross and Lennox; and Noelle Hedgcock as the fifth act’s Gentlewoman, now costumed as a period nurse in white sensible shoes.

Taking a different tone from everyone else in the cast is Basil Allen as Malcolm. Although he always registers his presence, he does not reveal his character until he takes over at the end.