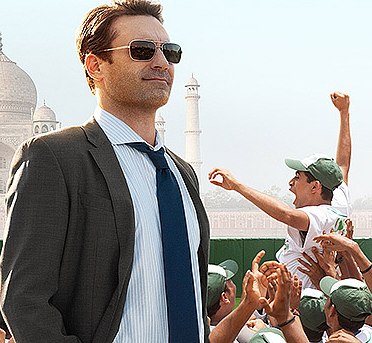 Sometimes fans want to forget about the business end of sports.

You know the feeling. Your guy’s on the mound for your squad, two outs in the ninth, bases loaded, best RBI man for the other team at the plate, the lead’s a thin one run.

All you care about while you’re leaning forward in your seat, in the stadium if you’re lucky enough to be watching live or in your living room catching the drama on your flat screen, is if he’s got heart enough to get that third out.

At the start of Million Dollar Arm, the taken-from-life story directed by Craig Gillespie and written for Disney by Thomas McCarthy, it’s obvious that this will be about a man who’s all about the money. Sports agent J.B. Bernstein is running out of it, his company slowly going dry because his big-name clients, snagged when he was working under the nameplate of others, have retired. A very major pro football player he and his staff of two have been courting for a half-year just said yes. But only if they’d pony up a million-dollar signing bonus the agent and the company simply do not have.

J.B. is played with equal parts I’m-a-big-shot-look-at-my-house-and-my-model-girlfriends swagger and I’m-gonna-lose-this-all-if-I-don’t-come-up-with-something-crazy-quick angst by Jon Hamm. His lieutenant, Aash, played steadily by Aasif Mandvi, is amazingly loyal and tremendously distracted by his family. One night he stays late drinking at his boss’ big house trying to crack the tough nut, and they click cricket across the screen. J.B. badmouths the sport of his partner’s homeland. But later, surfing between Susan Boyle’s inspirational debut on “Britain’s Got Talent” and a cricket match, J.B. hatches his play.

He convinces a rich businessman to back a trip to India, a competition for the million dollar cricket bowler arm to bring back to the U.S. to train to become a major-league pitcher. Just think of all those T-shirts and hats to sell to new fans in India, J.B. preaches.

So is the movie for a good, long, stretch at this point. Well, not hot, although J.B. does skype with his renter of his backyard cottage, Brenda, and moves from cold-hearted landlord to slightly interested.

But when eccentric, old baseball scout Ray, played with ease by eccentric old actor Alan Arkin, hears the right pop from baseball meeting leather a couple of times at a sports academy, the heat really is on.

The two throwers who win their way to America, and $100,000 and $10,000, respectively, are Rinku and Dinesh. They come from Indian villages that are poor and more poor. Their families, though, are filled with love, and J.B. and Aash are included in the final displays of tradition and respect.

The two non-English-speaking athletes, along with a translator and hopeful coach Amit, played delightfully by Bollywood star Pitobash, fly to L.A. Suraj Sharma and Madhur Mittal are darn fine as two young men who must learn English, American customs, baseball, how to pitch, how to handle pressure, and how to not tell J.B. that he’s treating them like crap by ignoring them except for giving them car rides to training and throwing pizza at them every night.

Brenda, mostly smiling and always filled with wisdom as played by Lake Bell, is definitely on their side, and wants to be on J.B.’s, too, if only he’d root for these young men he brought to a strange country and not for the business he’s trying to save.

Everybody feels really crappy at once.

Everybody feels really good at once.

It’s a true story, so I’ll jump right to the ending. These two young men sign professional baseball contracts a little more than a year after picking up a baseball for the first time.

Which made me smile, sure.

But did it make me pump my fist, like when my guy gets the third out in the bottom of the ninth with the bases loaded? No, it did not.

What about the buttons and cufflinks, Batman?
Michael Jackson, Elmore Leonard back on screen
To Top