In its short history, Central New York Playhouse, the little company in Shoppingtown Mall, has undertaken two mid-20th-century masterworks of American drama, Tennessee Williams’ A Streetcar Named Desire a year ago and now Arthur Miller’s Death of a Salesman. Guided by the surprisingly steady hand of first-time director Kasey McHale, this Salesman, running through March 22, is well thought out, runs smoothly at a crisp pace, and includes several bracing scenes with an assortment of well-cast supporting players.

Like last year’s Streetcar, with a different director and cast, this masterwork portrays its protagonist quite differently from what we’re used to seeing. Gone is the heavy-footed Willy Loman of Lee J. Cobb and Philip Seymour Hoffman. Instead this Willy is a self-deceiver from start to finish.

The key scene, as in any production of Salesman, comes late in the second act. It’s when the favored but flawed Loman son Biff (J. Allan Orton), arriving unexpectedly, encounters his father Willy (Keith Arlington) in a Boston hotel room with his usual floozie (Colleen Creeden-Baldwin). Following the script, Willy first denies that anyone is with him and then delivers cringe-wreaking alibis, that, for one, even though she’s wearing a slip she just came by from another room. Biff’s horror at this deception resonates forward and backward in the text. But Willy, as McHale and Arlington depict him, clings to his laughable lies without acknowledging the horror that has just taken place.

This, of course, is allowed. Many evergreen shows have generated new life by throwing off the suffocating grip of performers who once owned leading roles in this. The King and I becomes much more interesting by banishing the memory of Yul Brynner and casting an actual Asian actor as the monarch. For last year’s Streetcar, Jodie Baum gave us the most aggressive Blanche Dubois imaginable, the anti-Vivien Leigh. So here we have a shrill Willy given to strident denials and bluster. His emotional range has to be narrower. But such a character can still make a loud crash when he falls. 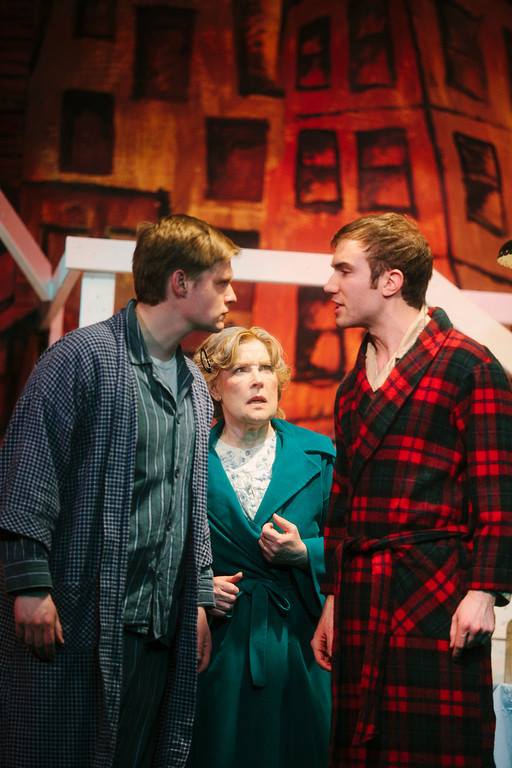 Tenderness and anguish then become the turf of supporting players, especially Kate Huddleston as wife Linda and J. Allan Orton as son Biff. One of the best-known faces town and the youngest person ever to win a Syracuse New Times Syracuse Area Live Theater (SALT) Lifetime Achievement Award, Huddleston sounds as though she’s been preparing for years to give us Linda. Except for one or two missteps, where director McHale has Linda shouting, Huddleston exudes compelling gravitas. She knows her boys and knows what’s up and what’s down with her husband, and she loves him anyway. Linda, lest we forget, has many of the best lines in Arthur Miller’s sometimes prosy dialogue, like, “Attention must be paid!” Huddleston’s final scene in the cemetery will rank with her greatest hits.

J. Allan Orton, who previously played Huddleston’s son Tom in a May 2012 production of The Glass Menagerie, must cover a wider range of emotions, as well as alter his appearance as a much younger person in flashbacks. McHale encourages him to be an angrier Biff than we’re used to, but he still convinces us of deeper emotion. Good as Orton is, his characterization gains an important assist from the contrast with Patrick Kelly as the shallower brother Happy. His mother calls him a “philandering bum,” but Happy’s real problem is that he does not grasp what Linda and Biff do. Some of this Salesman’s painful sparks flare up between the brothers after the bar scene.

Running more than three hours with 13 speaking roles, Salesman gives director McHale many opportunities to show us what her cast can do. Among the most striking is William Edward White as Uncle Ben, the cautionary figure who’s probably only a ghost in Willy’s imagination. At any time White enjoys a commanding presence that makes him impossible to overlook, but with his spectral white suit and broad-brimmed white hat (designed by costumer Barbara Toman), he just takes over the stage. The hint of a regional accent suggests an homage to Burl Ives, but there’s a touch of Sebastian Cabot in there, too. It’s the most determined scene-stealing White has ever pulled off.

Wonderful in a role that usually doesn’t get many thanks is John Krenrich as Howard, the heir that has taken over Willy’s firm. In his second-act scene he’s playing with a 1949-era voice recorder that allows him to boast about his children. His smooth, corporatist demeanor covers a heart of ice. Of the many blows falling on Willy, his is the coup de grace, not that he has any concern for the impact of his words. Executives at Enron could not have done the deed as plangently.

All the people in smaller roles acquit themselves well. Bill Lee expresses depth of understanding as the neighbor Charley, and the words in his informal eulogy, “with a smile and a shoeshine,” ring bitterly. Austin Arlington (son of Keith) takes nerdy Bernard over the decades and enlivens a tight scene with his actor father as Willy. Colleen Creeden-Baldwin’s floozie enjoys a lusty laugh. No wonder Willy could not resist her. 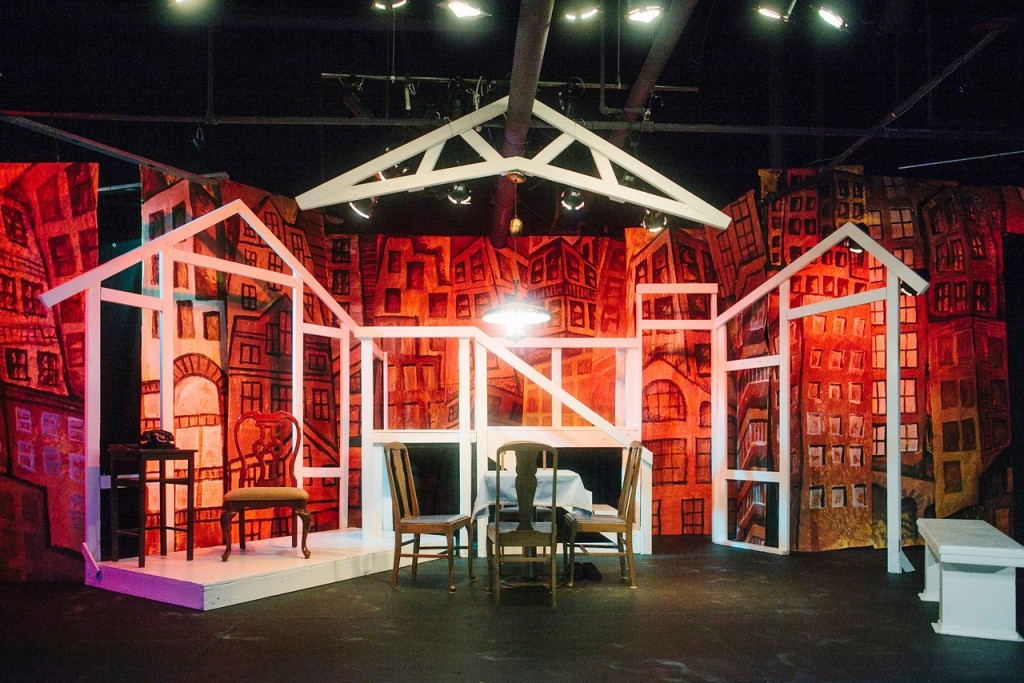 Ace set designer Navroz Dabu is in top form. White painted frames delineate a roof and an upstairs bedroom, backed by a hellish cityscape of the forbidding brick walls Willy rails against. Actor William Edward White also doubles as a lighting designer; his lighting can define a public space followed by a private one on the same square footage.

Death of a Salesman, usually ranked as the No. 1 American stage tragedy, is a tough place to start for first-time director Kasey McHale. But it’s a tragedy that can leave her smiling.