John Hughes’ 1985 movie The Breakfast Club was a profound and shaping experience for many creative people now in their mid-30s to late 40s. Together with such style-setting TV shows as Miami Vice, it defines the 1980s as discrete good old days of garish colors and let-it-all-hang-out emotion. Redhouse Arts Center director Stephen Svoboda has embraced the Me Decade effusively in his provocative and arresting adaptation of William Shakespeare’s Hamlet, running through April 5.

The prince of Denmark (Adam Perabo) begins with Judd Nelson’s persona from The Breakfast Club, thrusting a pugnacious ‘tude in black raincoat, black knit cap and fingerless black gloves, and builds from there. Two decades before the iPod, he totes a boombox, and like Jean Michel Basquiat, he tags graffiti. For Bardphobic younger audiences, there could hardly be a more transparent and accessible production. 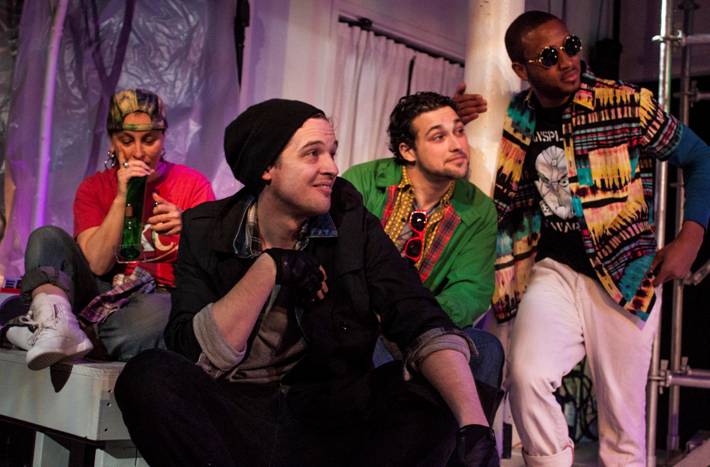 Playgoers who remember Svoboda’s Twelfth Night from two years ago should not be misled. Although the director mines every possible seam of the text for comedy, the production is no more a spoof or farce than if it were set in Victorian or Edwardian dress. Then again, Nikki Delhomme’s costumes from 1985 are now outrageously out of style, not merely antique as they would be from 1865 or 1905. A certain giddiness erupts early, as when Osric (Jay Merante) appears in a flaming Key West blazer, all well and good. But as the tone of the play turns darker, some of these sartorial horrors in minor characters’ entrances undercut the tragic dynamic of the whole.

In his short few years at the Redhouse, Svoboda and set and lighting designer Tim Brown have learned wonderfully how to exploit the house’s small performance area. The high metal scaffolding, mobile on casters, serves a hundred purposes. In the opening scene, Marcellus (Tammy Wilkinson), Bernardo (Scean Monté) and Hamlet’s pal Horatio (Daryl Acevedo) are high on the ramparts when they encounter the Ghost of Hamlet’s father (an imposing Jordan Glaski). In a trice the Ghost is pacing, ominously on one or the other of two raised platforms downstage so that we can be up close and personal.

Casting, as it has to be, is more critical to Svoboda’s vision than staging, costumes or music. Once again he favors a mix of professional out-of-towners and strong local players. New York City-based Adam Perabo is already a company favorite, having won a Syracuse New Times Syracuse Area Live Theater (SALT) Award for last year’s Baltimore Waltz, presented in tandem with W;t. Although he speaks in conversational American English like everyone else, we sense his respect for the dazzling poetry he speaks. His Hamlet is insouciant toward his rotten household but not churlish. He is without question the funniest Hamlet this writer as ever seen, especially in his taunting exchanges with Polonius (Steve Hayes, himself a rascally comedian).

What Perabo’s Hamlet is not, however, is especially melancholy, despite the black outfits. In the “To be or not to be” soliloquy, he sounds sweetly reasonable, not like a guy who dreads that his necessary actions could bring down the entire household upon his head. 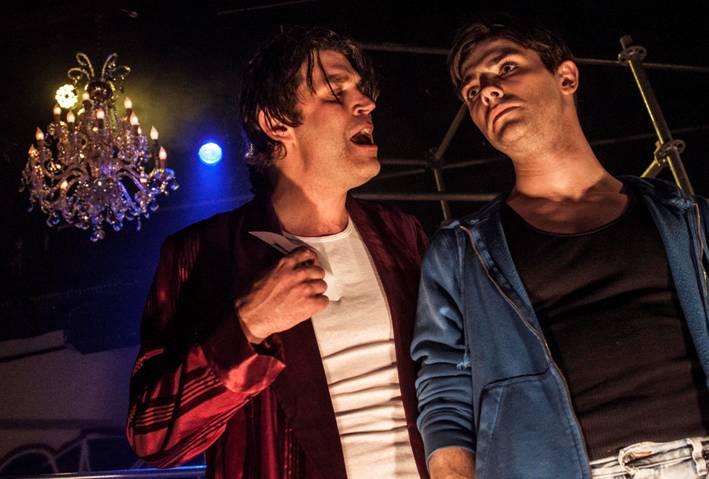 Svoboda’s vision works especially well with other members of the household, starting with those sinning elders, uncle-papa and aunt-mama. Long-maned Claudius (Nathan Faudree) is a sleazy, vulgar nouveau riche who appears to have come to affluence by breaking the law, not just murdering Hamlet’s father. The excess of Faudree’s characterization, the facetiousness and the gross physicality, suggest that more really is more.

Claudius’ consort and co-conspirator Gertrude (Rachel Torba-Grage), an idol of conspicuous consumption, hates to take off her full-length white mink and is usually seen with a glass of wine in her hand. Mindful of the attraction critics attribute between Hamlet and his mother, we notice that Torba-Grage’s Gertrude strides the room with a dancer’s body. She’s tall, blond and dangerous: Think of Robin Wright in House of Cards, only with long, flowing curls.

The superlative moment in Svoboda’s conception of Hamlet comes in Ophelia’s breath-stopping mad scene. With her polka dot tights and reddish hair, it might appear that Svoboda sees Ophelia (Katie Gibson) as Molly Ringwald. But in this Ophelia’s vulnerability and anguish she borrows aspects of Allison, the Ally Sheedy character in The Breakfast Club. Hamlet’s stridency in the “Get thee to a nunnery” scene cuts deep. In the mad scene Gibson’s Ophelia sings listening to music on her Walkman, with earphones the size of avocados. This may sound like spoof in summary, but Gibson’s conviction makes it work.

Two Equity players in the production work to different effects. The Polonius delivered by professional comic Steve Hayes is a considerable audience-pleaser. Trouble is, we’re used to seeing Polonius as the most lovable bore in English literature, but here he riffs as if he were working the room in Las Vegas. This changes the meaning of his death while hiding behind the arras. Later Hayes is back as the Gravedigger in the Yorick scene, the moment that defines “comic relief” for us, here ably assisted by Mary Nickson as the other digger. The laughs are so florid here, it’s almost as if tragedy has to elbow its way in to interrupt comedy.

Which leads us to the other Equity import, dark-browed Michael Raver as Ophelia’s vengeful brother Laertes. A player of enormous presence, a scowling Valentino, Raver is virtually the only one in a cast of 21 who elicits neither a smile nor a smirk. With only a sword in his hand, he straightens the course to prove that Hamlet is indeed a tragedy. 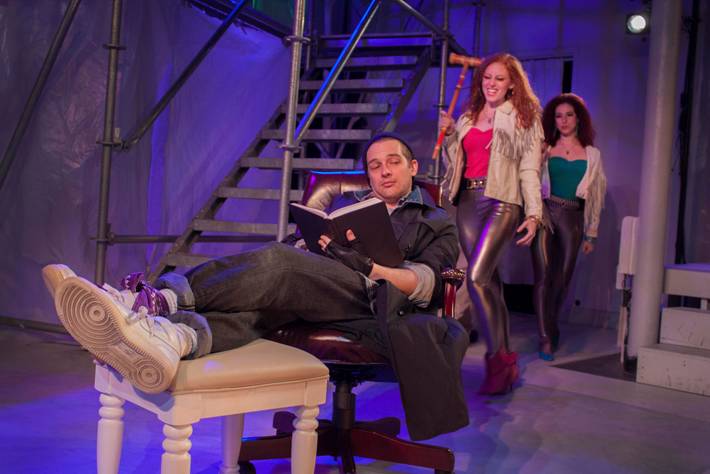 Elsewhere Svoboda has invented a device for every character. The ones that will cause the most comment are gender-switching Rosencrantz (Marguerite Mitchell) and Guildenstern (Leila Dean) as big-haired, gum-chewing chippies in buttock-hugging tights. Tom Stoppard, eat your heart out.

You don’t have to like every innovation in the Redhouse’s Hamlet. See it with friends. Your arguments later will include laughter.

Miller Time
An opera for the masses
To Top