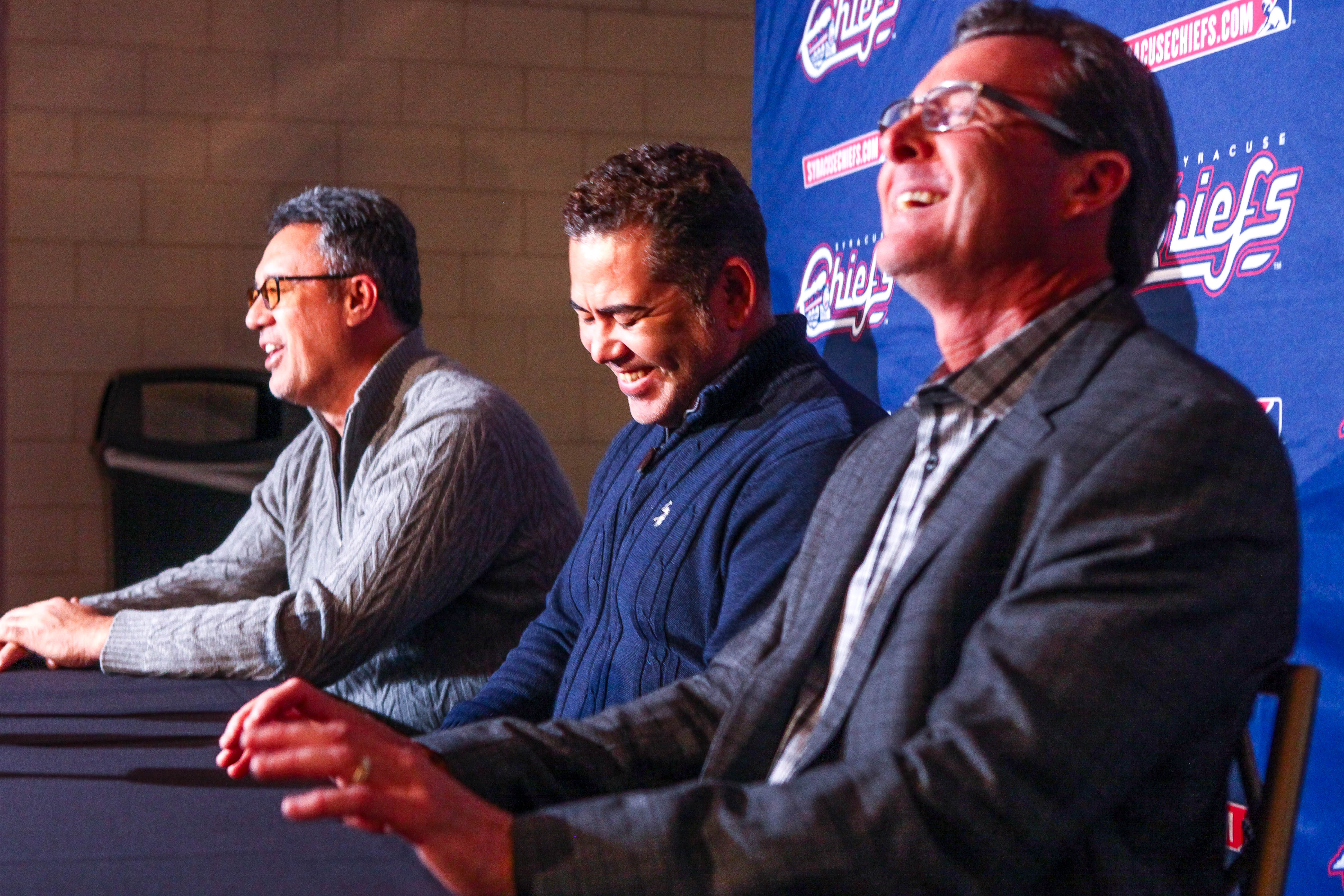 On a scale of 1 to 10, what does it mean to Dee Perkins to have the New York Mets as the Syracuse Chiefs’ major-league affiliate?

Dee Perkins, of Liverpool, grew up in Queens, the home of the Mets, and she’s a lifetime fan of the team. She’s also a deputy program director for Syracuse Challenger Baseball, a league for children and adults with disabilities that has a close relationship with the Chiefs. And in recent years, Perkins and Chiefs general manager Jason Smorol often joked about the Mets coming to Syracuse.

“The last time we talked about it, Jason said I might have something for you,” Perkins said. “I thought Daniel Murphy was coming to town. The biggest dream I allowed myself to dream was Daniel Murphy.”

Murphy, one of the heroes of the Mets’ 2015 National League championship team, is now with the Chiefs’ current major-league affiliate, the Washington Nationals. 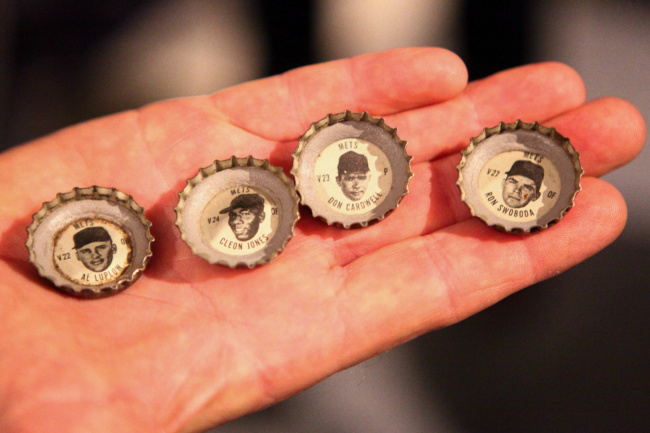 “And then, it was the Mets buying the Chiefs and I lost my mind,” Perkins said. “This has been years in the making that him and I have been going back and forth teasing each other about the Mets and then for it to actually happen, it was literally a dream come true for me.”

Wearing her Mets jersey, Perkins was one of about 700 fans who attended the Chiefs’ 58th Hot Stove Dinner Dec. 8 at the Pirro Convention Center in downtown Syracuse. Although the Chiefs have one more season with the Nationals before the Mets come in, the Hot Stove was all about the Mets as Smorol, Onondaga County Executive Joanie Mahoney and others welcomed the Mets to Syracuse, and former Mets Ron Darling, Tim Teufel and Edgardo Alfonzo were the special guests.

Smorol said the turnout was the second-best in Hot Stove history next to the 900 or so who attended the January 2016 event featuring Pete Rose. So clearly, even before the sale of the Chiefs to the Mets was finalized (that’s supposed to take place this week), the relationship is off to a fast start.

The money question, though, is how it will finish. The Chiefs’ management and board recommended the sale — and the team’s shareholders approved it — because the Chiefs have struggled to turn a profit and owe $1 million to cover two loans.

The affiliation between the Mets and Chiefs starts in 2019 after one more year with the Nationals. The lease between the Mets and Onondaga County for the use of NBT Bank Stadium runs through 2025. Can this partnership resuscitate the fan base to the point where the team is making enough money that the Mets aren’t tempted to move the team to another location?

Marty Nave, a lifelong Chiefs fan from Syracuse, said the fans and this community need to embrace the team whether it’s winning or losing — and for most of the last 40 years, it has been losing. Nave said fans should appreciate the level of baseball that is being played  — Triple-A is just one level below the majors — and understand that if Triple-A baseball does leave, Syracuse isn’t going to get it back. 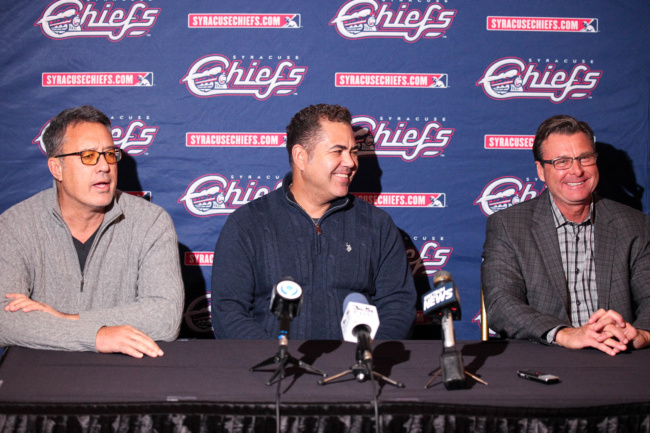 “You’ve got take the money out and support the team. The future of baseball in Syracuse is in the hands of the baseball fans,” Nave said. “You can’t say I’m going to the game expecting they’ll have a great winning season but to support baseball and support these players.”

Longtime Chiefs season-ticket holder Dave Smolnycki, of Camillus, agreed that it’s “put up or shut up” time for Central New York baseball fans. Smolnycki praised the work that Smorol and his staff have done to secure corporate sponsorships and fill the advertising space at the stadium but said that obviously hasn’t been enough to keep the team in the black.

“If you love baseball, you better start coming out now and in the next eight years,” Smolnycki said. “Because if you don’t, it may not be here any longer,”

Smolnycki believes the Mets’ affiliation will help the Chiefs’ traditionally poor  attendance because it’ll be easier for fans here to follow former Chiefs since the Mets are on the radio and television every night in this market. And while this remains a New York Yankees town, the Mets are a close second and starting in 2019 Mets fans from Syracuse can watch the team’s top prospects before they reach New York City.

Eric Gallanty, the Chiefs’ director of broadcasting and media relations, has traveled with the team throughout the International League and said there’s not always a correlation between attendance and a Triple-A team’s proximity to its major-league affiliate. For every Lehigh Valley that flourishes with the Philadelphia Phillies only an hour away, Gallanty said, there’s a Gwinnett that finishes last in attendance even though it’s close to the parent Atlanta Braves.

“But I know this: We get more fans when the Yankees are here (in Syracuse) than on a normal Tuesday,” Gallanty said. “That’s absolutely true and should be the case with the Mets.”

Smorol said the Chiefs will receive full support from the Mets, who are thrilled to be moving their Triple-A team from Las Vegas to Syracuse. Mets chief operating officer Jeff Wilpon, the son of principal owner Fred Wilpon, visited Syracuse Dec. 7 with some of the Mets’ front office staff to meet the Chiefs’ staff, answer questions and “welcome everybody to the Mets’ organization,” Smorol said.

For Dee Perkins, who celebrated her birthday at the Hot Stove by getting autographs from Darling, Teufel and Alfonso, the Mets can’t get here fast enough. And she said fellow Mets fans feel the same way. She’s a member of a Facebook group called “Delusional Mets Fans” who live around the state and many are planning on making trips to Syracuse starting in 2019.

Former Mets players Ron Darling, Tim Teufel and Edgardo Alfonzo were the special guests at the Dec. 8 Hot Stove Dinner. (Another former Met, Mookie Wilson, couldn’t make it because of a delayed flight.) Here’s what Darling, a color commentator for the Mets and TBS, and Teufel, the Mets’ roving infield instructor and a former minor-league manager in their system, had to say about Syracuse and why the Mets are thrilled to be coming here: 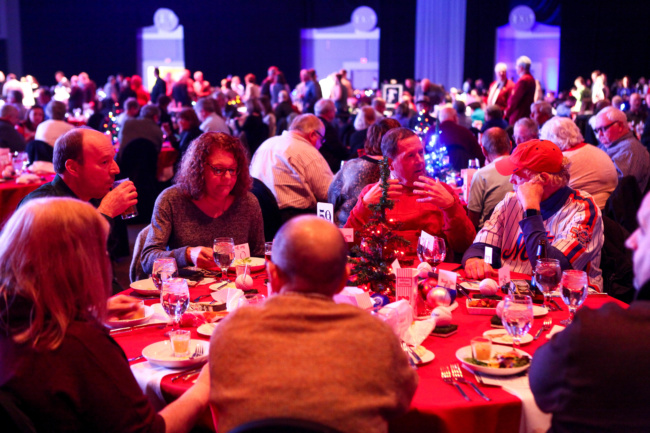 Darling on Syracuse: “You always judge towns if you’re a Triple-A player by what do they have to offer as far as where to eat, where to hang out, where to do stuff and Syracuse was always at the top of that list. So in that respect, I’m really happy that the Mets have made a financial commitment to Syracuse and its baseball team.”

Teufel on the difference between Syracuse and Las Vegas, the Mets’ current Triple-A city: “Currently we’re in Las Vegas and it’s 116 degrees out there in the summer and the ball flies and it’s hard to grade out our players evenly with the teams in the International League in this type of climate. So I think it gives us a better chance to evaluate our talent better when we’re in that same kind of location, same kind of temperature, same kind of environment.”

Darling on the proximity between Syracuse and New York City: “The proximity, of course, is a game-changer for the Mets. The ability to, after a ballgame, have an injury to a player and be able to throw him in a car here in Syracuse and have him there for the next day, it’s just going to be a chance for a great partnership.”

Teufel on having the Mets’ Triple-A team in the International League: “As far as our organization is concerned, we have some talented young guys who are going to come up through here. What we’d like to see is them get ready for the big leagues. And this is a great city, a great spot for us for a couple of reasons: It’s the same climate that they’ll play down in Citi Field when they get up there; and second, when they come here, they’re going to be in a position where they’re going to be playing top-notch players in the International League getting them ready for the big leagues. It’s a perfect stop for them.”

Darling on the fit between Syracuse and the Mets: “I think I know my history here in Syracuse. The Yankees had an amazing run, you know, (Ron) Guidry played here and Thurman (Munson) and others. Toronto had a great run and now I think it’s the Mets’ turn. I have a lot of friends here in Syracuse that I went to college with, and they seem evenly split from Yankees fans and Mets fans and it seems natural that a New York team would be here.”

The Syracuse University men’s basketball team improved to 8-1 Dec. 9 with a harder-than-it-sounds 72-58 win over the Colgate Raiders at the Carrier Dome. The Orange overcame a sputtering offense and a barrage of 3-pointers by the Raiders to tie the all-time Division I record for most consecutive wins against one opponent.

The Orange against Colgate (1963-2017) and UCLA against California (1961-1985) hold the record with 52 consecutive wins. Syracuse also owns the two longest active streaks in the country against Colgate and Cornell (38 in a row).

Syracuse has this week off before traveling to face former Big East Conference rival Georgetown at 12:30 p.m. Saturday, Dec. 16, and Coach Jim Boeheim said the youthful Orange is using this week to clean up issues on both ends of the floor.

“We’re still trying to get together offensively as to what we can do, and we got a lot of work to do to get better,” Boeheim said. “We played a lot of games, relatively, in the first part here, so it’s good to have a week to try to get a little bit better at some things.”

. . . Syracuse’s non-conference football game against Notre Dame on Nov. 17, 2018, was moved from Notre Dame to Yankee Stadium as part of the Irish’s Shamrock Series. The Orange is 7-1 overall at Yankee Stadium with two recent wins in the New Era Pinstripe Bowl against Kansas State in 2010 and West Virginia in 2012.

. . . The Syracuse women’s basketball team improved to 10-0 Dec. 8 with a 72-62 win over Drexel at the Dome. The Orange, which was ranked No. 24 in the Dec. 4 USA Today Coaches Poll, is on the road for the rest of December, starting with a game at Coastal Carolina Sunday, Dec. 17.