The bio-pharmaceutical operation takes up 90,000 square feet of the long-vacant New Venture Gear space, as the former automobile plant is now home to more than 10,000 budding marijuana plants.

There is a holistic quality behind the medical marijuana movement currently growing across the United States. For one DeWitt company, however, holistic means more than just the treatment of body and mind.

Terradiol New York, one of 10 licensed medical marijuana facilities in the state, expands the definition of holistic to mean the healing of communities as well as patients. The bio-pharmaceutical operation takes up 90,000 square feet of the long-vacant New Venture Gear space, as the former automobile plant is now home to more than 10,000 budding marijuana plants.

Terradiol is the result of a partnership between founder and Chief Executive Officer John Vavalo and Vice Chairman and Chief Operating Officer Dennis DuVal. Both men are linked by the deaths of loved ones who were forced to cope with the pain of terminal illnesses.

Vavalo is co-owner of J. Michael Shoes, a Syracuse business started by Vavalo’s late father when John was born. Vavalo had been an engineer and entrepreneur, yet he proceeded to help his mother run the family business following his father’s death. 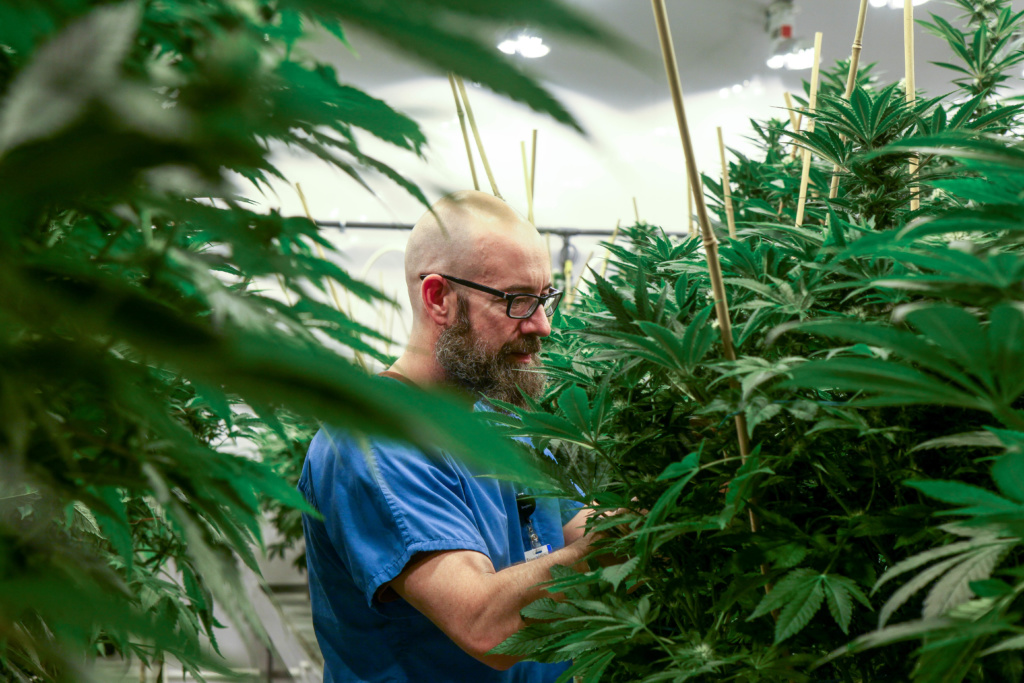 See Photos: An inside look at Terradiol

Six years ago, Vavalo’s mother was diagnosed with a terminal illness. She underwent chemotherapy, but her fight ended two months after the chemo. Vavalo recalled witnessing the agony that his mother experienced during her chemo rounds, and how he wished there was a form of pain relief for her.

Following his career as a City of Syracuse police chief, DuVal entered the private sector and was involved with the food manufacturing industry. His mother was diagnosed with terminal breast cancer and had been prescribed opioids. DuVal remembered that in the later stages of her illness she developed opioid chants, where a person continuously mumbles or “chants” while awake from the constant use of the drug.

Like Vavalo, DuVal wished there was a better option. DuVal said it wasn’t about finding a cure at that point, but about relieving the pain. Upon losing their mothers, both men dedicated time to researching alternatives, and found medical marijuana.

“If this can bring relief to some people,” Vavalo said, “then why not?”

Their individual research eventually led them to the creation of Terradiol, one of the largest and most advanced medical marijuana facilities in the country. Vavalo coined the company’s name: “Terra” is a term for Earth, and “diol” is a suffix commonly attached to cannabinoids — the chemical compounds found within the cannabis flower. The business began in 2017.

“Everything I’ve done in my career has been to give back,” DuVal noted. “This is no different.”

Terradiol currently has 21 employees on staff, with more to be hired in the coming months as the technical positions begin to be filled. Vavalo said that during the peak of construction for the facility, 60 workers were on site setting up the ventilation systems and water filtration units, as well as the building of multiple offices, grow rooms, labs and packaging areas.

“We demand a certain level of excellence of ourselves and those we work with,” Vavalo said after a tour of the facility. Multiple 65-inch security monitors are connected to 187 cameras throughout the property. An airlock hallway works as an added security measure, but also as a bio-contamination filtration prior to approaching the base of the operations.

Currently, 5,000 gallons of city water are filtered to absolute “000,” which means 100 percent of dissolved solids have been removed, then mixed with the company’s own blend of ingredients that are pumped into the three flower rooms and mother room. The flower rooms are where plants begin the growth process from seed or tissue culture and progress through the growth stages before they are ready to be processed. The mother room is where the main plant specimens are located that are used to propagate new plants. 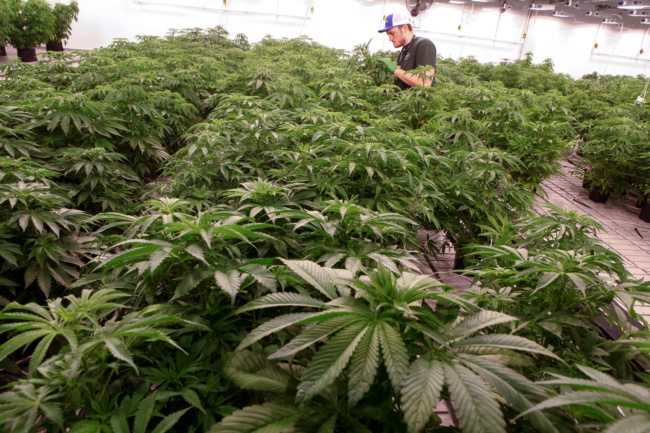 Plants are cultivated for the best possible strains. Terradiol has 109 marijuana strains ranging in sizes from four inches to three feet throughout the current flower rooms. The plants, depending on the strain, have a full cultivation span anywhere from 45 to 90 days.

Once the plants are ready for processing, they are moved into a drying room equipped with sliding racks. While on the racks, the plants’ moisture content drops to 20 percent before moving to the oven, where the remainder of the moisture evaporates before reaching the extractor.

Vavalo says Terradiol uses a high-pressure carbon dioxide extractor. The liquid CO2 washes through the plants, then is removed, leaving a honey-type substance that is ready for the next phase. The process allows for a consistency within the product that is perfect every time.

The large packaging room is essentially a mini-pharmaceutical facility where the Terradiol products — from oils to vapes and powders and more — will be ready to load into the company’s fleet of vehicles for delivery to the dispensaries. 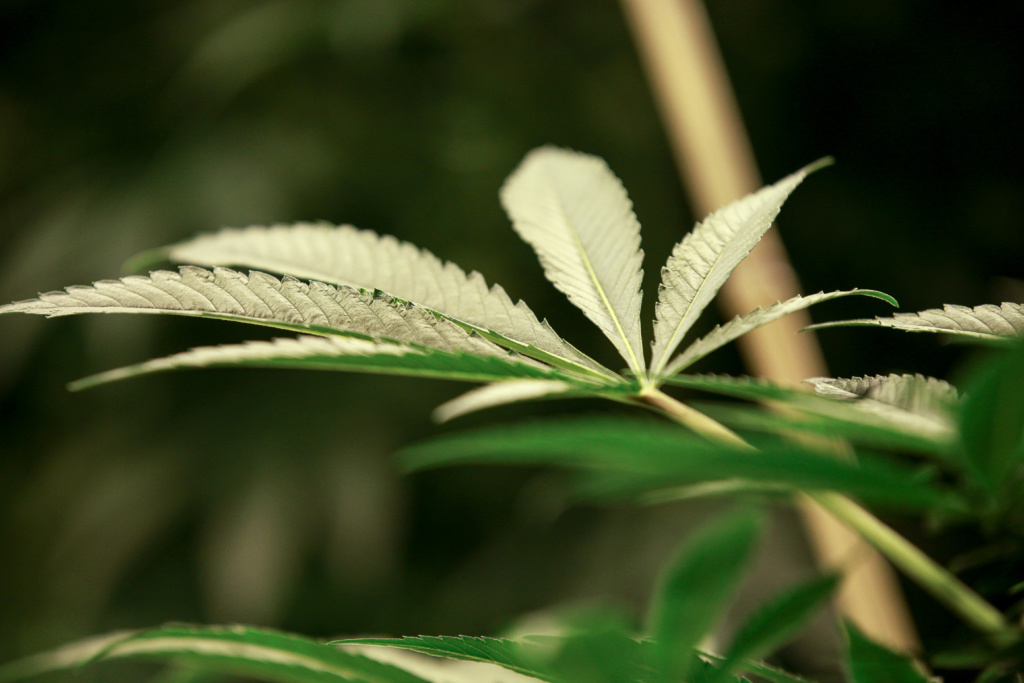 The DeWitt facility will eventually have 14 grow rooms, and there is capacity for potential expansion up to 300,000-plus square feet. The company is also in the process of opening a similar facility in Ohio.

And since medical marijuana is currently not covered by insurance, the company is developing a program that will allow it to subsidize the cost of products for patients who need them.

Regarding the anti-marijuana stance taken by U.S. Attorney General Jeff Sessions, both Vavalo and DuVal felt the comments were directed toward the states that have legalized recreational use, and that New York’s compliance for medical marijuana is stricter than in other states. DuVal added that if you do things outside those parameters the federal government will intervene, just like in any other business.

“Ultimately, the goal is to help people in need,” DuVal said. “It’s a health-and-wellness thing for us.”