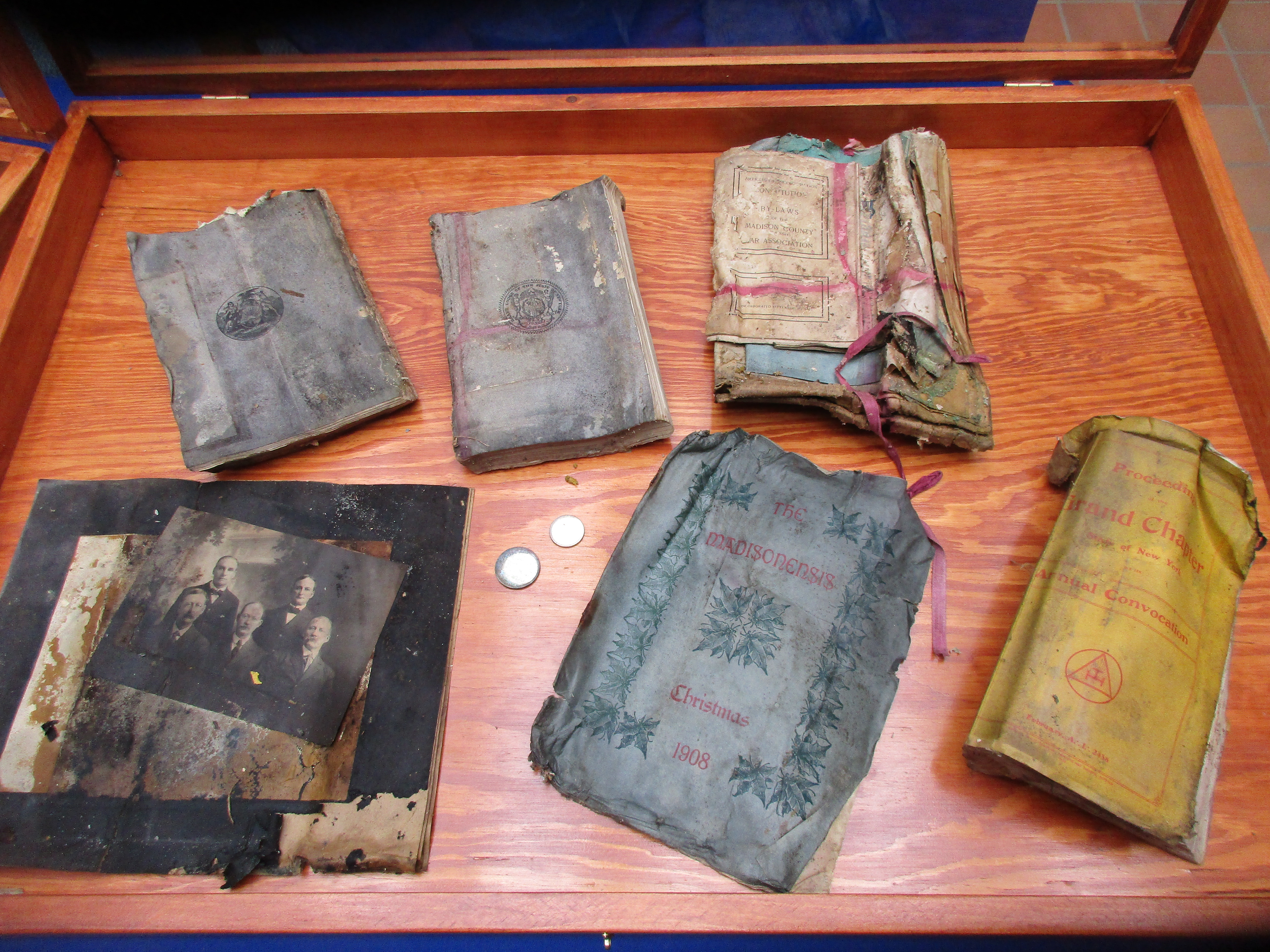 Madison County historian Matthew Urtz felt for a message from the past as he reached into a just-opened copper box that had sat unbothered for more than 100 years in a wall at the county courthouse.

On Jan. 7, 1909, that time capsule was sealed inside the wall for a future generation to unearth. That day came on April 16, thanks to construction work currently in progress at the building. 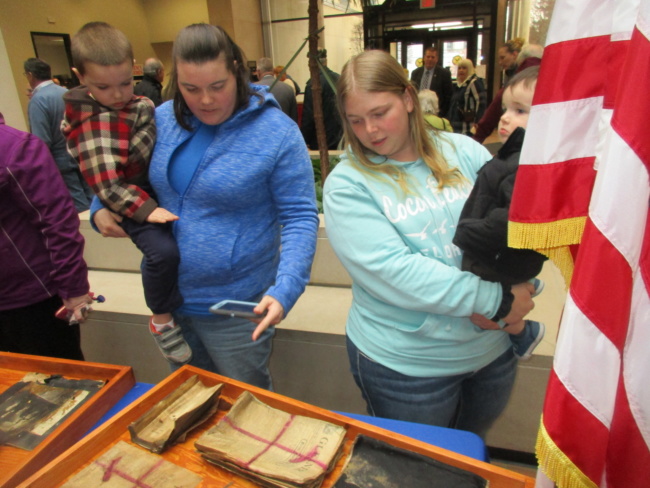 A group of people look at the artifacts recovered from the time capsule. The items will be on display until mid-May.

As renovations continue to bring the courthouse into compliance with Americans with Disabilities Act standards, the work was set to soon begin with tearing down the wall housing the time capsule. With little notice, the county officials had to schedule a time to remove that capsule and hold the official unveiling. Despite the public relations rush, the event lured a large turnout of local press and curious residents.

The press wore hard hats as they visited the area under construction where the time capsule would be removed from its sanctuary. The rest of the audience watched the process on a live streaming video inside the main lobby of the county office building next door.

“It’s the first time in 100 years that thing has seen daylight,” noted John Becker, chair of Madison County’s board of supervisors.

Madison County maintenance workers David Reiss and Craig North removed the 1-by-1-foot copper box from its resting place, and, joined by Urtz, set out with
a hammer and chisel to break its solder weld holding. The workers labored slowly to ensure the contents were not damaged by their efforts. After chiseling at it for some 15 minutes, a side was bent away from the box, and Reiss finished the job with a pair of snips.

Urtz, wearing gloves, was the first to reach inside the box, and a slight frown was evident when he felt the condition of the contents. Moisture had gotten into the box over the last century, and the artifacts — most of which were paper — were now a soggy, pulpy mass.

“For its age, it’s not in the worst shape it could be in,” Urtz assessed. “I am honestly a little let down, but I think we can still salvage some of it.”

Urtz, joined by Becker at the podium and county records management coordinator Kevin Orr, made the official unveiling in the lobby of the county office building. Urtz drew each piece tenderly from the box and handed it to Orr, who held it up for all to see.

Their treasure featured a copy of Rev. Silas Person’s Historical Sketch of the Religious Denominations of Madison County; a photo of the five members of the building committee in charge of constructing the county buildings; a list and accounts of the members of the eight Masonic lodges at the time in the county; and a copy of the charter and a list of management and inmates at the “Old Ladies Home,” nomenclature they noted by today’s standards was not quite politically correct.

“It’s really unfortunate it was wet like that, but we are still excited about this,” Orr said. The next step will be to apply dry sheets of paper between the wet pages to draw out the moisture, he noted, and to let them air dry after that.

Even as the video was shown in the office building lobby, that same footage was viewed by students in classrooms around the area. But a couple of lucky youngsters got to see the relics firsthand. Nikki Dandignac of Wampsville brought out her children Kyler, 4, and Beckett, 17 months, to be a part of the historical occasion. Kyler said he liked the old-time coins the best.

“I really like history, and I wanted to expose the kids to that, too,” Dandignac said. “I hope they take some of that away with them today.”

“I was really impressed by what they found, especially the books, some of which we have in our lodge,” said Richard Morley, New York state senior grand warden.

“There was definitely a lot of interest in the time capsule,” agreed Cazenovia lodge master Jim Wightman. “It was very important that the Masons were here then, and that we are here now. This sends out the message that we are still active.”

The contents of the time capsule will be on display through mid-May at the county office building on Court Street in Wampsville, in the same building as the Department of Motor Vehicles office. After that, modern items will be added to a new time capsule — a much more waterproof device, Urtz stressed — and placed in the new structure to be opened at some future date. Becker said the board is currently looking for suggestions of what kinds of items to include in that collection, and any ideas can be shared on the Madison County Board of Supervisors’ Facebook page.

Regardless of how wet the contents turned out to be, the excitement of the grand reveal of pieces of Madison County history was not dampened.

“We didn’t know it was going to be wet like that,” Becker said, “but it’s still always neat to see our history, and to see where we come from.”

Medical marijuana takes root in DeWitt’s Terradiol company
Tournament time for SU lacrosse, a peek at the Crunch
To Top