“If you want to make God laugh, tell Him your plans.”

It might have been Woody Allen, or maybe it was Albert Einstein, who said, “If you want to make God laugh, tell Him your plans.” When playwright Sean Grennan uses the line for his 2011 comedy Making God Laugh, he’s signaling that what people project in the first act is just not going to work out during more than two hours of stage time.

Then again, Grennan’s modest expectations for the play have been trampled. After coming out of nowhere (rural Wisconsin), Making God Laugh has been produced in dozens of big markets including Chicago and Philadelphia before making its boffo area premiere at Cortland Repertory Theatre. Unusual for an unknown quantity, the company has been selling out shows and has already slated extra performances before it ends on Saturday, Aug. 23.

Making God Laugh initially feels like a generic sitcom, or possibly a parody of one. We’re in a lower middle-class home, somewhere near Chicago in 1980. Papa Bill (Dale J. Young) is a postal worker, and his three nearly adult children are back for Thanksgiving dinner. Thomas (Ryan Halsaver) is on his way to the priesthood, which is very pleasing to the household, with a picture of the pope placed next to the family. Former high school athletic star Rick (Magarin Hobson) is getting started in the real estate business. And daughter Maddie (Melissa Macleod Herion) has gone off to college to study drama, hoping to have a career as an actress. Such a choice does not have family support.

Dominating the scene is the boundlessly cheerful matriarch Ruthie (Mary Poindexter Williams), who is at once a dictator and a ditz. Her June Cleaver demeanor does not stop us from noticing that her comments are cutting, as she dismisses her daughter’s aspirations and marginalizes her seemingly milquetoast husband. Yet many laughs are at her expense. Ruthie complains that the Catholic Church has been going downhill since it abandoned the Latin Mass. She may not have understood what she was saying, but she liked it better that way. 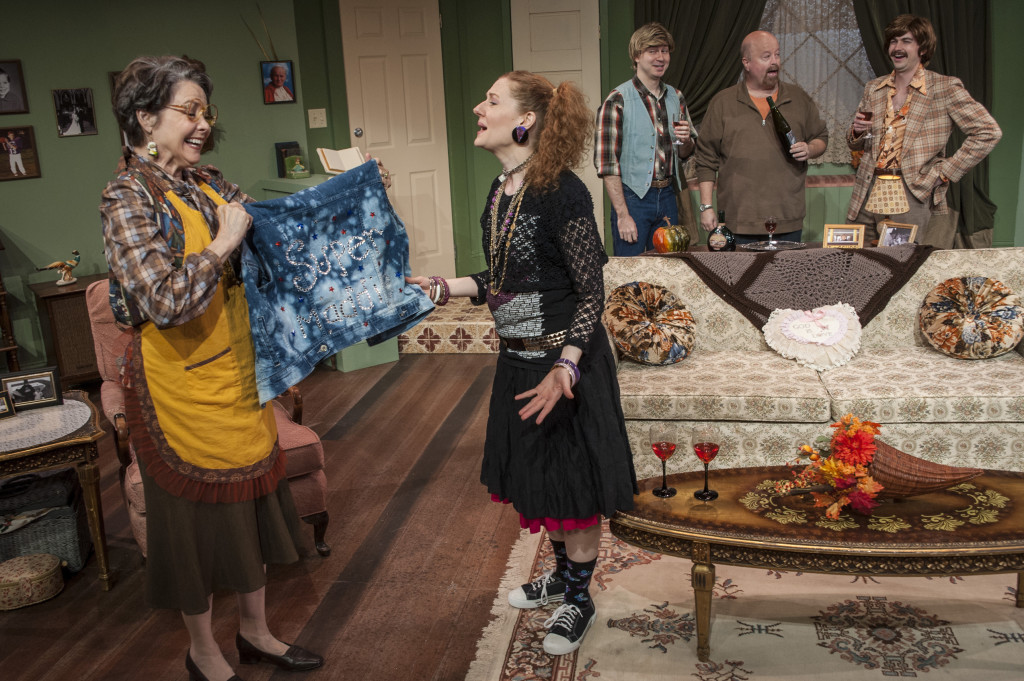 If Making God Laugh’s New York state opening had been in Manhattan instead of Cortland, the facile treatment of Ruthie’s foibles would have invited a harsh response. So, too, would the glib hindsight on predicting the future, like exclamations on the cost of what now looks like a cheap gallon of gas. Bill proclaims you’ll never be able to send mail by computer because “people love the feel of paper.”

Yet underneath the clichés and easy gags lie real emotions. Time sorts out pain from light banter, as the action moves forward nine years to Christmas 1989. The second act is then divided between New Year’s Eve in 1999, and finally, to the present, 34 years later.

Shod in black Converse sneakers, Maddie is the most assertive child. She also recoils from digs at her carrying a few extra pounds to her inability to attract a male, which escalates into a firefight. This also gives actress Melissa Macleod Heron a big share of the play’s best lines, such as the need to say grace before taking Tic Tacs.

As the brother who is prey to bad choices (“Invest in the Yugo, a car with a great future!”), Rick can be the butt of jokes rather than the deliverer of them. Grennan gives him a show-stopping scene when his belief in conspiracy theories gets the best of him. Actor Magarin Hobson lends his character depth when he turns out to be the neediest.

Virtue is always hard to play, and seminarian Thomas remains a caring person throughout, never revealing ugly character faults. His conflict, which his mother cannot recognize, is that he becomes out of step with his vocation. Ryan Halsaver’s comic opportunities might be smaller, but he scores big with some one-word lines, like “Monsignor.”

Director Jim Bumgardner’s best work appears in the handling of the parents. Thanks to Dale J. Young’s strong performance, Papa Bill’s outburst in the third scene becomes the dramatic climax. And Mary Poindexter Williams, one of Cortland Rep’s most-loved performers (2010’s Six Dance Lessons in Six Weeks), plumbs the irony of the play’s most characteristic lines, notably, “Why do people have to be so damn happy?”

Costume designer Jason Lee Resler has fun delineating 34 years of now-extinct fashions in everything from pants to eyeglasses. Although not credited for them, he must have been in charge of the outrageous wigs, some of which should have waddled out for the curtain call.
Showtimes for Making God Laugh are Wednesday, Aug. 20, 2 and 7:30 p.m., and Thursday, Aug. 21, through Saturday, Aug. 22, 7:30 p.m., at Cortland Repertory Theatre, 6799 Little York Lake Road, off Route 281, Preble.

Cuse Comedy Showcase
Schoolhouse Rock at the Redhouse
To Top