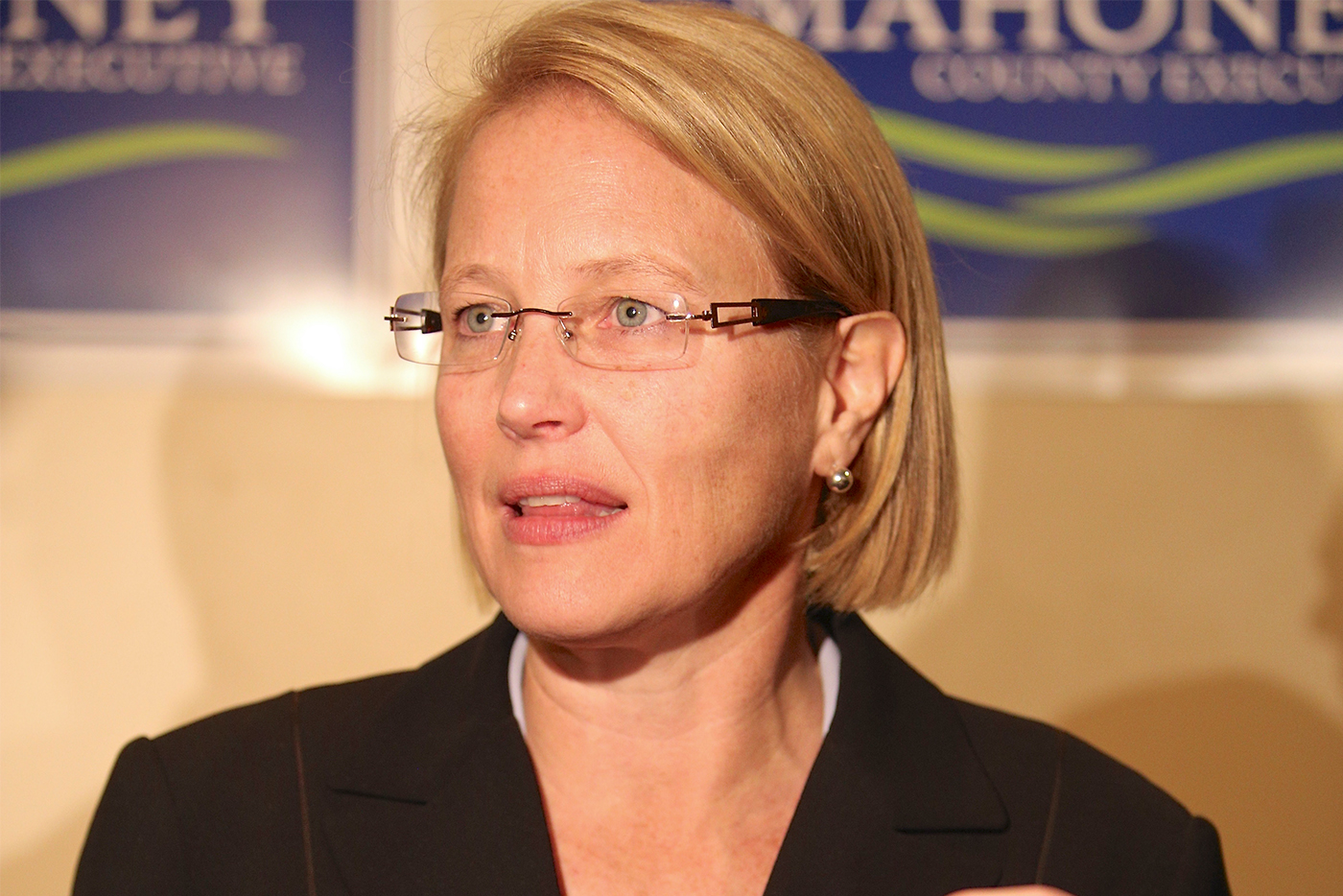 Joanie Mahoney took center stage at the State of the County address.

The cavernous Central New York Hub for Emerging Nano Industries at DeWitt’s Collamer Crossings filled quickly to standing room only March 1 as more than 300 gathered to hear Joanie Mahoney deliver her ninth State of the County address. In introducing Mahoney, 5th District County Legislator Kathy Rapp noted that after 25 years in government she had learned that well-behaved women seldom make history, an observation that drew only scattered applause.

For Mahoney, the site of the speech stood as a symbol of potential for the county’s most exciting new economic activity. “Growing up, the movie Slap Shot was filmed here (in 1976),” she noted, “and we talked about it for years because it was so rare. Now we have an almost constant filmmaking presence with the Film House studio as a permanent tenant here in the hub.”

She cited the budget of Film House’s American Dresser, shot here, as an example of that potential. That budget included more than $100,000 for hotel rooms, more than $120,000 to rent cars and RVs, and $500,000 local payroll for labor, crew and extras.

Mahoney emphasized that from a fiscal perspective the state of the county was strong. “We ended 2015 with a surplus of $11.5 million,” she observed, “thanks mostly to lower state mandates.” She added that last year also witnessed a historic reduction in property tax rates.

References to an advantageous relationship with Gov. Andrew Cuomo included: “I was happy to hear after we hosted Gov. Cuomo’s cabinet here last fall that he plans to bring his fishing tournament to Onondaga Lake this summer.”

Mahoney admitted, however, “There is another side to the coin, and this year we also heard a troubling report about how our successes are not yet being shared by everyone. Onondaga County still suffers with some of the highest concentrations of poverty among African-Americans and Latinos. We very much live in a segregated community.”

An inevitable focus on the Consensus report, exploring consolidation between city and county government, launched Mahoney into a historical journey on the subject, from Gov. Al Smith in the 1920s to an actual merger of the city and county’s purchasing departments in 2011.

She cited a common councilor who expressed hostility to a proposed referendum on metropolitan government, proposing at least 18 months of discussion. “I have sobering news for you, councilor,” she chided, “we’ve actually been debating it since before you were born.”

After the speech, the councilor — Khalid Bey, representing the 4th District — responded that his timeline resulted from the 51 proposals of the Consensus panel. “This effort is not people-driven,” he maintained. “It’s political-driven, and the people are searching for answers.”

Afterward, Mahoney referred to comments from the councilor over the past several weeks, at virtually every one of the Consensus public hearings. “It’s completely untrue,” she said, “that this is a conflict between the governor and the (city of Syracuse) mayor (Stephanie Miner). He needs to get away from the personalities. If he’s waiting for a time when all the politicians are getting along to resolve this, it will never happen.”