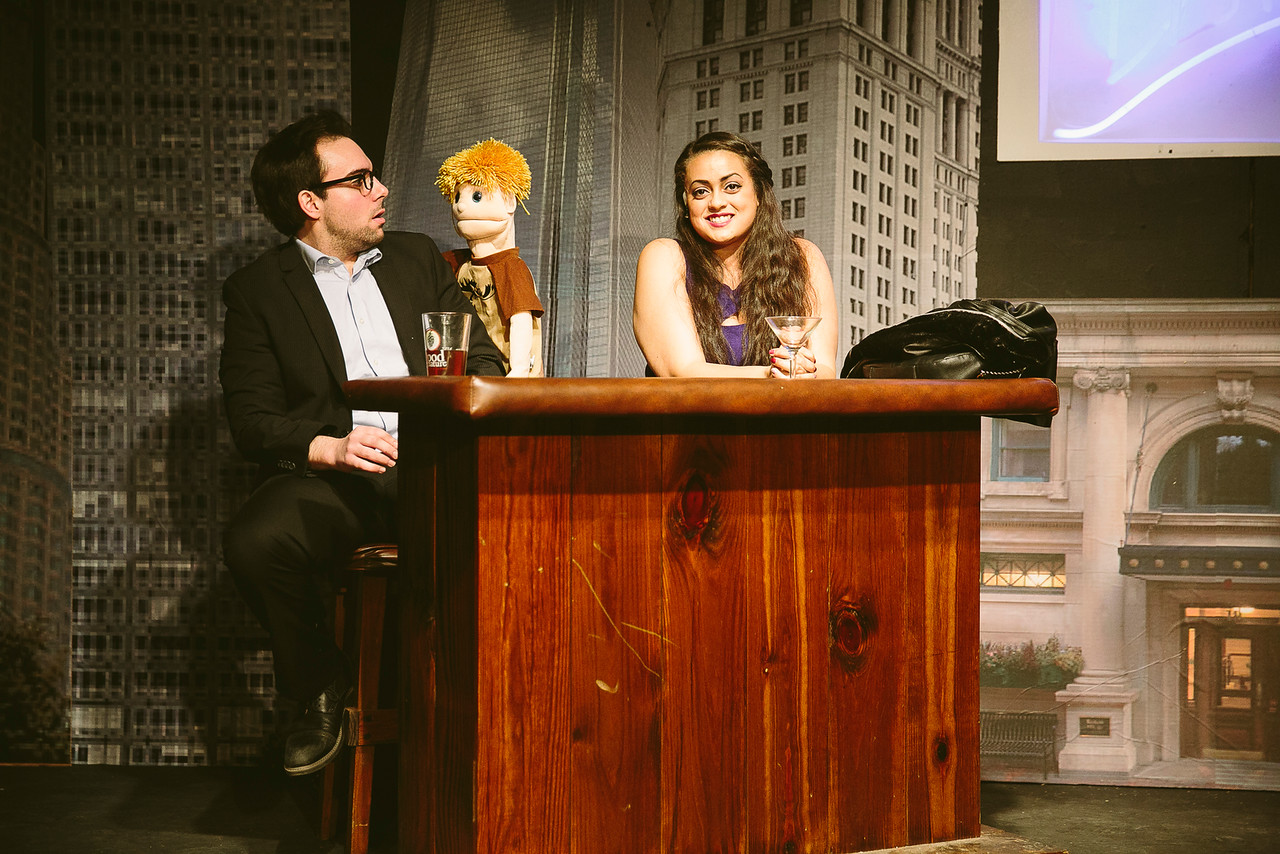 CNY Playhouse’s production of “First Date” is a post-Valentine’s Day must see.

Just in time for February valentines in search for a night of escapist theater, Shoppingtown’s Central New York Playhouse hosts the area premiere of First Date, now running through Feb. 27.

This airy look at the perils of blind dating comes from Broadway novices Austin Winsberg (book) and Alan Zachary and Michael Weiner (music and lyrics), with all three claiming that part of their 2012 musical comedy is based on their personal experiences. Yet much of this opposites-attract romance treads awfully familiar turf.

Bespectacled nebbish Aaron (Jordan Westfall) enters a Manhattan restaurant to meet Casey (Michele Lindor), a brassy veteran of the blind dating game. Characterization is minimal at first: Aaron pulls out more nervous tics and twitches than a dozen Ben Stiller movies, while Casey struts her hot-to-trot stuff like Mae West in her prime. Both are fans of the sci-fi TV series Quantum Leap, however, so there is hope.

Casey’s biological clock is also ticking, natch, while Aaron is still crushin’ on his ex, Allison (Terrace Althouse), introduced in a dream sequence amid a flurry of rose petals. Surrounding the central couple are 10 actors as fellow diners seated at other tables, albeit ready to morph into supporting players (such as best pals and former lovers) when necessary.

The show is presented in a quasi-real time, about 100 minutes or so, as the couple hesitantly moves from the bar for an initial round of drinks to the eventual dinner table if things are smoothly progressing. (The show was performed without an intermission on Broadway in 2013, but it’s a two-act at Shoppingtown.) To shoehorn the dozen-plus songs into the proceedings, however, the action literally stops with the other actors freezing in position. When Casey reveals that she’s not Jewish, for instance, the other players groan “Oy vey!” and launch into a spirited number titled “The Girl For You” for Aaron’s benefit.

First Date’s concept does no favors for director Greg J. Hipius. Because he has to place the big dance numbers front and center, Hipius’ blocking means that Aaron and Casey have to chat at a bar established at the rear of the stage before moving them to a dinner table that’s closer to the audience.

Meanwhile, the Zachary-Weiner song book seems less concerned with proper character development and functions mostly as a calling card for what the composers can do, everything from rockers to ballads. There’s a sweet duet between Aaron and his late mother (nicely sung by JoAnne Rougeux), but it seems way out of place in a show about first dates.

Still, breezy does it, with director Hipius and music director Dan Williams lending verve to the slender material, while attractive leads Westfall and Lindor handle much of the heavy lifting. The lyrics are often witty, with the song “First Impressions” offering Aaron’s initial take on Casey: “She’s kinda indie and pretty hot/ She’s a lot like all the things that I’m not.” There are some surprises along the way, too, like a pop-up puppet who may have crossed over from Avenue Q. First Date is a lightly likable entry in the durable romcom genre.