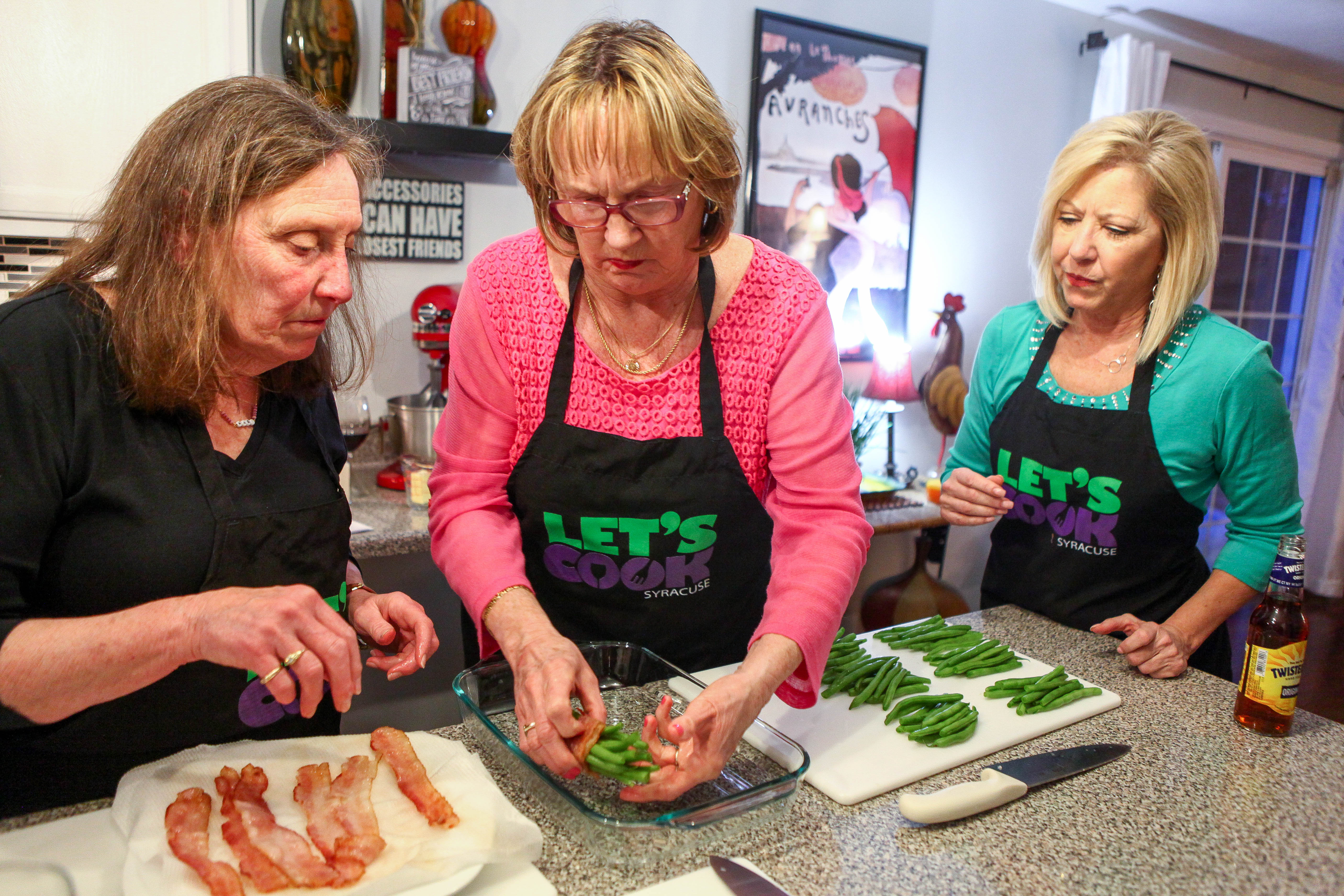 Michele Bellso (right) supervises a session of Let’s Cook Syracuse: “The classes are a lot of fun. Everyone gets to enjoy the food. And hopefully everyone goes home with a new skill.’’ (Photo by Michael Davis)
Share
Tweet
Share
Share
Email
Comments

Have you ever hosted or attended a party where guests cluster in the kitchen, talking food, wine, recipes, cooking techniques, favorite food TV shows and the new restaurant that’s the talk of the town? That’s the atmosphere Michele Bellso aims to offer with Let’s Cook Syracuse, an ongoing series of cooking classes she debuted this winter. The classes are held in her Cicero home.

“The classes are part entertainment, part instruction, part social and part dinner party,’’ Bellso says. “They’re a lot of fun. There’s no shopping, no menu planning and no cleanup. Everyone gets to enjoy the food. And hopefully everyone goes home with a new skill.’’ 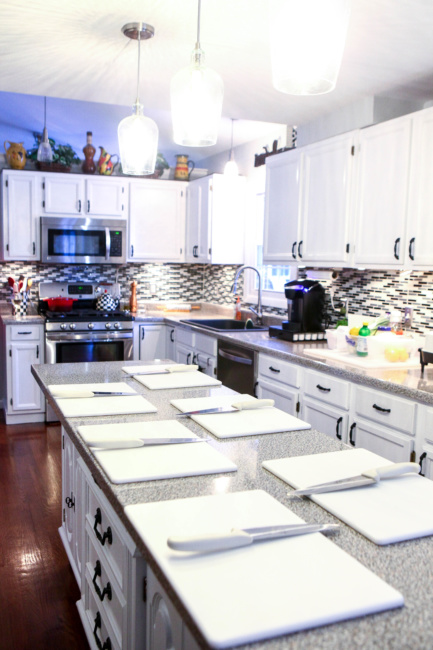 Michele Bellso turns her kitchen into a classroom through Let’s Cook Syracuse. (Photo by Michael Davis)

By day, Bellso is the director of marketing and communications for ProLiteracy Worldwide in Syracuse. By night, several evenings a week, as well as some weekends, her kitchen becomes a classroom.

Bellso plans the class themes and menus, writes the recipes, purchases and organizes ingredients and sets a festive dinner table. All the participants need to do is show up, put on an apron and be ready to prep, cook, learn and eat. Bellso supplies coffee and water. She can’t serve alcohol, but participants can bring their own wine or beer.

“I want people to feel comfortable,” she says. “Making a meal isn’t just about slicing and dicing and chopping. It’s about planning and timing. And it should be fun. I don’t want to use any ingredients that people can’t find or people can’t pronounce. I want foods that are accessible and that people would be proud to serve at home.”

Bellso, 57, is no stranger to culinary instruction. She co-founded and co-directed the Syracuse advertising agency Designworks, and in 2005 took leave to launch Make and Take Gourmet, a chain of home meal assembly kitchens with storefront locations in Cicero and Fayetteville. It quickly grew to 20 franchise locations in five states.

When Make and Take collapsed in 2009, she returned to Designworks. She joined ProLiteracy in 2014, drawn to its mission of promoting adult literacy learning. All the while, she says, she missed Make and Take and the personal relationships she grew there.

Years ago, Bellso says, she offered cooking classes in her home. Why not do that again, she thought, using her own recipes, recipes handed down from her mother, recipes she prepares for her 15-year-old daughter and recipes developed for Make and Take?

She surveyed her network to see if people would be interested and what topics they might have her cover. Even people who cook regularly expressed interest in picking up new skills and branching out into unchartered territories, like vegetarian cooking and international cuisine. In addition to broadening their food horizons, Bellso says, people are looking for fun “date night” and “girls’ night out’’ options.

“Everybody is so busy between work and family; it’s really hard to find time to cook every night, especially if you never really learned how to cook or don’t know shortcuts,’’ Bellso says. “Even people who do cook say they make the same things over and over. So hopefully this will spark new ideas.

“Here, we’re working in a home kitchen, not a commercial kitchen. It’s intimate. Everyone works together to put things together. You’re not just learning new things, though that’s a huge side benefit. It’s social.’’

Bellso says her audience is primarily women ages 35 to 50, although couples have taken a class together and 20-somethings with little cooking experience have signed up, too. The open floor plan of her kitchen allows six to eight people to work comfortably at stations set up along the kitchen island. She has a six-burner stove with one large oven and a pantry stocked with cutting boards, knives, pots and pans and baking gear. 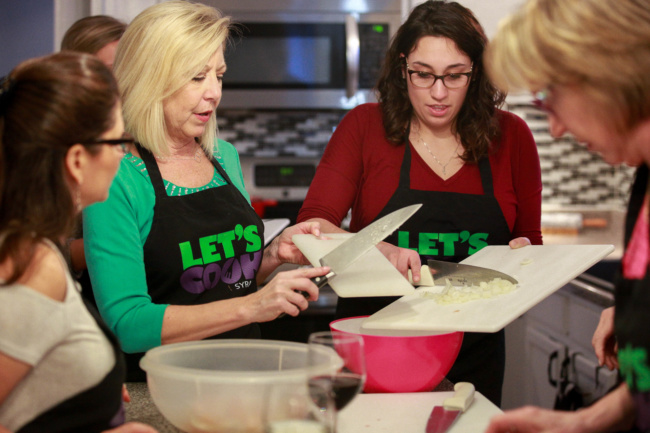 Michele Bellso (left) lets a student take the lead during a class. (Photo by Michael Davis)

She describes her role in the kitchen as the adviser. “Guests do all of the chopping, whisking, cooking, baking, etc., that is called for in the recipes. I am there to help them by sharing tips and advice about cooking. They go home with a folder with all of the recipes.”

Debra Wise, a teacher in the Baldwinsville Central School District who lives in Cicero, signed up for a dinner party-themed class with a group of friends. Shortly after ringing Bellso’s doorbell, they settled in, poured glasses of wine, put on aprons and picked a workstation. They paired up to get the work done quickly, so everything would be ready at roughly the same time, Wise said.

“Michele was such a warm and hospitable hostess and made the night so relaxing, educational and enjoyable,” Wise says. “She was very organized with the kitchen setup, food pre-prep and having six people share a kitchen without having chaos. It was a great way to get some new recipe ideas and learn handy kitchen tricks while hanging out with friends and ending with a dinner party.’’

Terri Lingenfelter, a self-employed financial educator who lives in Cicero, has two college-age children and has been eager to expand her recipe repertoire. She signed up for Bellso’s comfort food class, partly because the brown-sugar glazed meatloaf sounded so good. Participants also prepared macaroni and cheese-topped shepherd’s pie and chicken divan.

“I liked the whole concept,” Lingenfelter says. “I like simpler recipes that are user-friendly that you can put together in a reasonable amount of time. I definitely want to do it again.”

Stoop Bakery Café Makes The French Connection
Could iridology be the next star of alternative healthcare?
To Top