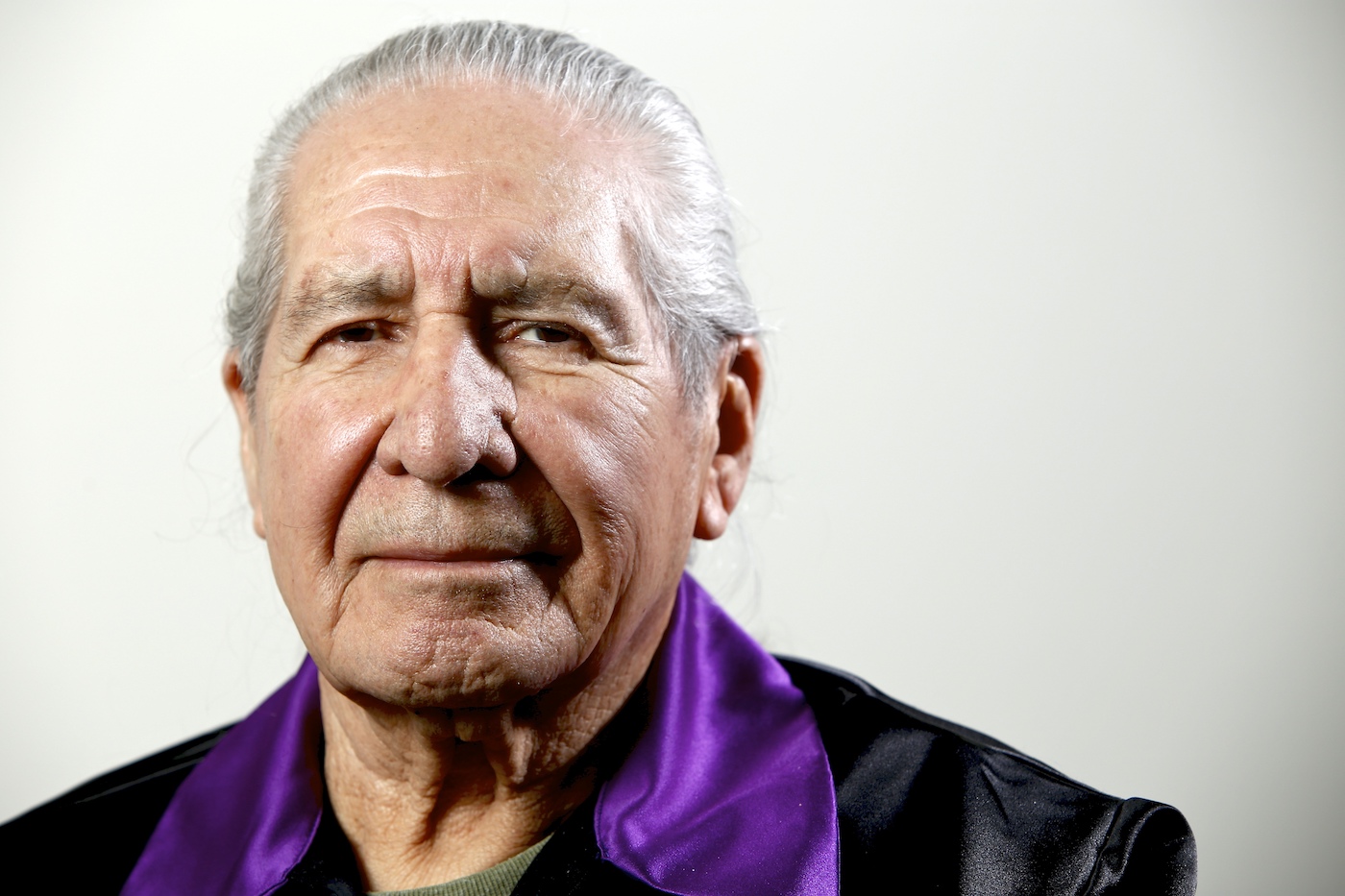 Executive producer Gayle Anne Kelley began working on Spirit Game: Pride of A Nation with a clear motive. “I want to change history to correct what was left out and to create a counter-narrative about Native Americans,” she said in a telephone interview from Burbank, Calif. “Plus, I love sports.”

Those messages come across loud and clear in the 102-minute documentary, which receives its East Coast premiere on Saturday, June 3, 2 p.m.. at Eastwood’s Palace Theatre, 2384 James St., in a red carpet event for citizens of the six Haudenosaunee (Iroquois) nations. A public screening is set for Saturday, June 24, 7 p.m., also at the Palace; admission will be $12. The film is produced by One Bowl Productions in partnership with the Haudenosaunee.

The movie about lacrosse and its relationship to the Haudenosaunee “isn’t a standard sports documentary,” the Los Angeles Times wrote after its May 24 Hollywood premiere. “Its focus is on spiritual matters as well as the physical because it deals with a game its adherents believe is just about as old as time.”

The film’s descriptions of “the creator’s game” and the success of the Iroquois Nationals serves as a powerful metaphor for the Haudenosaunee’s efforts to maintain dignity, identity and sovereignty. “By detailing the enormous pride in who they are and what they do that lacrosse instills in the Iroquois, it provides the kind of window into another culture’s belief system that sports films rarely attempt,” the LA Times wrote.

The film features interviews with Native American and lacrosse leaders, including Oren Lyons, Onondaga Nation faithkeeper. Lyons, whose former teammates include Jim Brown and Roy Simmons Jr., led the Syracuse University Orangemen to a perfect season in 1957. “I’ll never be able to replace what the game has given to me,” Lyons says early in the film, for which he served as executive producer.

Spirit Game also highlights the Thompson brothers: Jeremy, Hiana, Miles and Lyle, all four of them Nationals team members. Lyle Thompson, two-time winner of the Tewaaraton Trophy for men’s lacrosse player of the year — the sport’s equivalent of the Heisman Trophy — described lacrosse’s spiritual dimension. “Once the ball goes up, we scream,” he said in the movie. “That lets the Creator know we’re starting the game and we’re playing for him.”

Kelley and co-directors Peter Spirer and Peter Baxter planned to focus on the 2014 World Lacrosse Championships in Denver. The Iroquois Nationals team (which Oren Lyons founded in 1983) lost to Canada and the United States. They beat Australia, 16-5, and took home a bronze medal.

That competition alone would have made a dramatic movie. It was the first time the Nationals medaled in the competition. And it followed the 2010 World Lacrosse Championships in Manchester, England. Despite high-level diplomatic efforts British officials would not allow the team to enter the country on Haudenosaunee passports. The team refused to use Canadian or American passports, instead withdrawing from the tournament.

The film features intense, close-up footage of the lacrosse players in practice and competition. “It’s a phenomenal sport not only because of the players’ physical prowess, but because of the genesis of the game,” Kelley said. “It was meant to heal and to bring people together and develop peaceful and productive relationships.”

In a rare humorous, but pointed, scene, the film crew records a meeting with Haudenosaunee leaders and executives of Nike, which has sponsored the Native American team since 2006. “When we sign this contract, we get all our land back, right?” Lyons joked.

The film focuses on the players’ pride and struggles on the field, even as the Haudenosaunee continued broader battles. Amid the 10-day competition, Pope Francis was embarking on his first visit to the United States. Haudenosaunee leaders saw an opportunity to press the Catholic Church’s leader to renounce the Doctrine of Discovery, a concept that emerged in 15th-century church documents to justify the colonization and oppression of indigenous peoples

Haudenosaunee representatives left the international lacrosse event and headed to papal events in New York City and Philadelphia, only to face disappointment. Onondaga Nation Tadodaho Sid Hill, the spiritual leader of the Haudenosaunee, was invited to speak on an interfaith panel but learned the panel would feature only representatives of religions the United Nations recognizes. At another event, officials would not allow Hill to wear his ceremonial headdress saying its animal horns were dangerous.

The indignity Hill and his contingent met during papal events reflects the historic erasure that inspired Kelley to produce the film. “The lack of the real truth about the founding of this nation and the founding principles concern me most,” she said. “I see how the past informs the present. The Iroquois shared their governance with us and showed us how women and the Earth should be included. We see the results of leaving them out.”

Spirit Games is “the first in a series of media projects correcting history and showing the influence of indigenous people,” Kelley said. “Film transforms minds. Film can change the world.” She will attend the June 3 premiere.

The Haudenosaunee are “the statesmen of indigenous people,” she said. “Without the Iroquois and other nations, this country might not exist.”

In the historic tournament hosted by the Haudenosaunee, the Iroquois meet Canada in the championship final. After an emotional, hard-fought game, Canada took the gold for the fourth time, beating the Iroquois, 12-8. Oren Lyons reminds viewers that lacrosse is much more than a game to the Haudenosaunee: “We’ve lost many games, but we’ve never been defeated.”[snt]

Oren Lyons Takes On The UN

In a recent address at the United Nations in New York City, Oren Lyons pushed the body to allow indigenous peoples to participate more fully in UN meetings. “I must express to you our consternation, that on the 10th anniversary of the United Nations Declaration on the Rights of Indigenous Peoples, we are presented with ‘enhanced participation’ purporting to ‘enable our participation and meetings with the UN bodies,’” he said April 25.

Lyons’ comments came during the two-week UN General Assembly marking the 10th anniversary of the passage of the United Nations Declaration on the Rights of Indigenous Peoples (UNDRIP). It was the 16th session of the UN Permanent Forum on Indigenous Issues (UNPFII). The UN’s General Assembly in September 2007 adopted the declaration, which established a universal framework of minimum standards for the survival, dignity, well-being and rights of the world’s indigenous peoples.

The United Nations last July completed a draft on “Participation of Indigenous Peoples in the UN.” According to Lyons, who has participated in UN proceedings in New York and Geneva for 40 years, “The proposed procedures seem to violate most of the articles of the declaration. In particular, our rights to self-determination; free, prior, and informed consent; consultation; and many more.”

More than 1,000 members of indigenous communities all over the world attended the two-week Assembly in New York. Tadodaho Sid Hill delivered the ceremonial welcome at the Assembly April 24. Sessions addressed a wide range of topics, including ancestral land rights, empowerment of indigenous women and the health risks and environmental threats to indigenous peoples by mineral and gas extraction.

In his brief address, Lyons renewed his warning that humans continue to abuse natural resources. “Our mandate is inclusive of all life, the welfare of future generations and the common good,” he said. “I remind you as we did in the year 2000, and again in the year 2014, that the ice continues to melt in the north. We squandered time.”