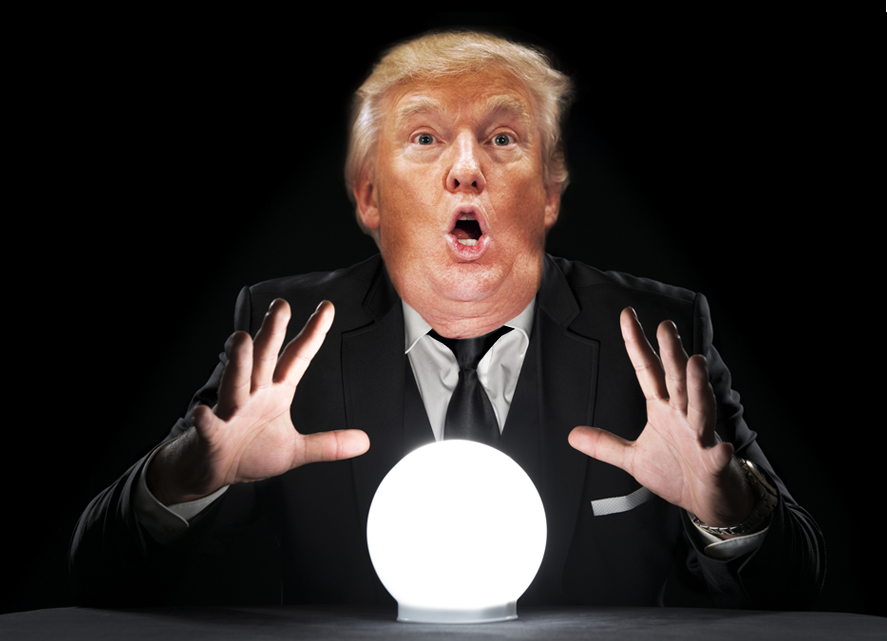 Much of my adult life has been spent wracking my brain for humorous column ideas. At times, the fruit hangs so low it hits me in the face, but too many other times — whether due to my own stalled imagination or a dark turn in the news cycle — nothing seems funny.

That’s not a complaint. I’m used to the process, and I’m at peace with it. As President John F. Kennedy said, we choose to go to the moon and tackle other challenges “not because they are easy, but because they are hard.”

But now the challenge comes from the other direction. In nearly four decades of writing humor, nothing has prepared me for the bounty of riches bestowed by our current president. There’s too much absurdity coming too fast: one perfect column idea eclipsed within hours by something even better.

The Boston Molasses Disaster keeps coming to mind. In 1919 in Boston’s North End, a huge molasses tank collapsed, releasing a 25-foot-high wave of molasses that entombed everything in its path. Twenty-one people lost their lives in the tsunami of sweetness, proving yet again that too much of a good thing can be fatal.

Much like those hapless Bostonians, I’m stuck in a flood of folly in which the more I struggle, the deeper I go. Consider the president’s just-concluded trip abroad. When I first saw the ridiculous image of Donald Trump, flanked by the king of Saudi Arabia and the president of Egypt, with his hands placed portentously on a weird glowing orb, I figured I had my column idea for the week. I would purchase not one but two spheroidal LED pool lights and walk around town asking people if they wanted to touch my balls. Pretty inspired, don’t you agree?

But immediately after Trump left the warm embrace of the House of Saud and landed in Israel, he served up another gimme. Or, more accurately the first lady did. The Melania hand-slap became an internet sensation, but more importantly it captured the attention of every married man on the planet. I hatched a related column idea based on the concept: “250,000 Ways to Tell When Your Wife Is Unhappy With You. By Someone Who Knows.”

Alas, that flame of comedic genius was extinguished within an hour by a geyser of geostupidity.

“We just got back from the Middle East,” the leader of the free world announced while meeting with Israeli President Reuven Rivlin in — and this detail is key — Israel. That gave me the idea for a World According to Trump column that would feature one of those exaggerated satirical maps. The North and South Poles would be minuscule, Washington, D.C., would be at Mar-a-Lago and Russia would be located in Nebraska. I even had the opening paragraph written: “I just got back from the Middle East, and by that I mean King David’s on Marshall Street.”

But no, that couldn’t happen either, because then came the meeting with Pope Francis and a classic Newsweek headline: Did the Pope Fat-Shame Donald Trump?

“What did you give him to eat: potizza?” the pope asked Melania in Italian. They laughed and laughed. Potizza (potica) is a heavy, nut-filled pastry from Slovenia, Melania’s home country.

Bingo! I would prepare a giant potica and eat the whole thing and then, under its influence, write a column warning Pope Francis that if he doesn’t show our president more respect we’re sending over a certain congressman from Montana who will turn the pontiff into a pontizza.

Here, also, was an opportunity to humorously reference past porcine presidents, including 340-pound William Howard Taft, who may have become stuck in a White House bathtub, and Fayetteville’s own Grover Cleveland, who definitely made a few too many trips to Sweet Frog.

Except then came the icy, clenched-jaw mano-a-mano handshake between Trump and French President Emmanuel Macron, and the humiliating golf cart ride at the G-7 Summit and the shoving aside of the president of Montenegro to get into better position for a photo. Each incident was a column waiting to happen, but as they piled up, so did my sense of paralysis. Would readers care about any of it by the next week when the molasses tank of material would rupture all over again?

Even before Air Coarse One had ferried the president home, the narrative was changing from diplomatic dissonance to domestic duplicity. Had the allegedly brilliant and cunning son-in-law, Jared, truly been so stupid as to ask the Russians to use their equipment to secretly communicate with the Kremlin? And shouldn’t I be writing about that? Or should I give up and write a column about June being National Accordion Month. Or just call in sick.

I’m tired. So very tired. Life was so much easier when Obama was not born in the United States.