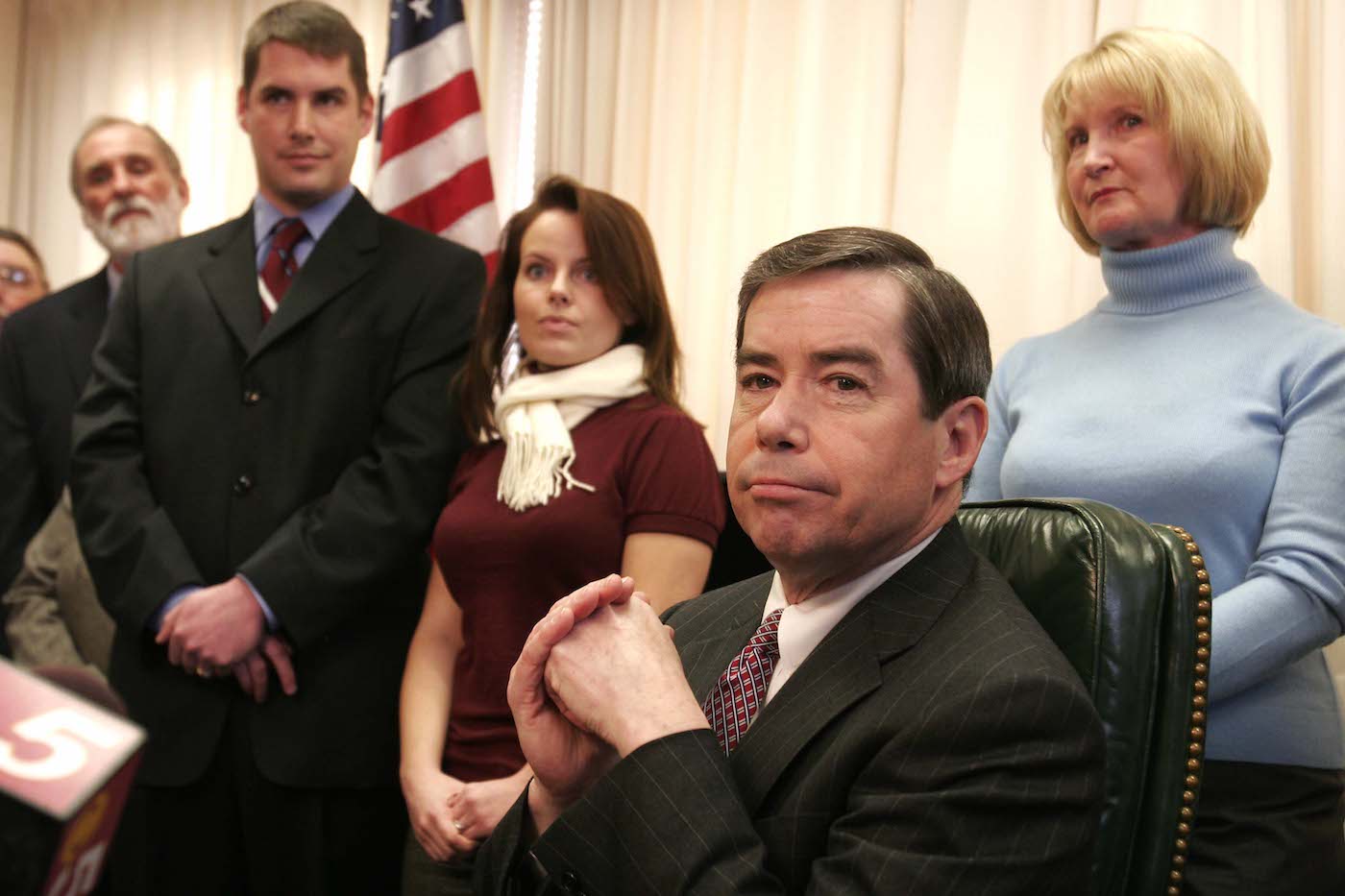 Katko says he is meeting with constituents: through Facebook Live interviews, telephone town halls and listening sessions. These events, he has said, are the most efficient way to communicate with his constituents in Onondaga, Oswego, Cayuga and Wayne counties. His critics aren’t buying it, arguing that the formats allow Katko to control the conversation and avoid confrontation.

Almost three months into the Trump administration, protests against the president and Republicans show no signs of slowing. About 400 people rallied outside Katko’s Syracuse office Feb. 22, asking, “Where is Katko?” while simultaneous rallies took place elsewhere in his district. About 400 people were at Nottingham High School’s auditorium for a March 18 town hall meeting organized by the CNY Solidarity coalition. Katko was invited but did not attend.

Nearly 50 people spoke, with most sticking to their two-minute limit, including several who identified themselves as Trump or Katko voters. One after another, speakers — some with anger; others in tears — listed their concerns. A cruel federal budget. Demonization of Planned Parenthood. Stifling the First Amendment. Trump’s conflicts of interest. Voter suppression. Climate change. The travel ban. Russia’s interference in the 2016 election. Some even hinted at impeachment.

“The biggest risk to national security is Donald Trump,” the first speaker said. That comment, echoed by several at the forum, came three weeks before President Trump authorized, without congressional approval, 59 Tomahawk missile strikes on a Syrian airbase.

That, Bob Greene, Cazenovia College history professor and an expert on the American presidency, points out, “is an impeachable offense.”

Under the War Powers Clause of the U.S. Constitution (Article I, Section 8, Clause 11), [Congress shall have Power…] To declare War, grant Letters of Marque and Reprisal, and make Rules concerning Captures on Land and Water.”

“The president did not consult Congress,” Greene said. “Regardless of the merits, what President Trump did was unconstitutional. If it is unconstitutional, it is by definition an impeachable offense.”

Katko echoed Trump’s rationale for the strikes, saying in a statement, “The horrific and barbaric chemical attacks by the Assad regime against innocent civilians, including children, warranted strong and measured action.” Further, “targeted U.S. strikes on the air base from which these chemical attacks emanated were a proportional response to this horrible atrocity.”

Katko’s brief statement cited “the complexity of the conflict in Syria” and urged “the administration to articulate its strategy moving forward.”

Sen. Rand Paul, Sen. Tim Kaine and Rep. Barbara Lee were among those who noted that the action was unconstitutional. The Syracuse New Times asked Katko to respond to that charge. What will he do to ensure that the administration “articulate(s) its strategy moving forward”? What should that strategy be? What role should Congress play?

Katko’s spokeswoman, Erin O’Connor, responded with a cordial email: “I will pass along your questions to the congressman. Thanks.” The Syracuse New Times received no further response by deadline.

It’s unlikely that Katko, or his Republican colleagues, will pursue impeachment over the strikes, Greene said. “The House has to accuse the president, and he has a Republican House,” he explained. “Even though it is an impeachable offense, this jury will not convict.”

Katko’s refusal to hold town hall meetings is “bad politics,” Greene added. “If you are an elected representative, you ignore this at your own peril. If you don’t feel comfortable meeting face-to-face with constituents, you shouldn’t run for office. It’s part of the job.”

That could come back to bite Katko in the 2018 midterm elections. “While we don’t vote out our Congress as a rule, when we do, it’s in the off-elections,” Greene said.

While Trump’s action in Syria without congressional approval may indeed be “a high crime or misdemeanor,” Greene added, “that’s whatever Congress decides it is at any given time.”

A Republican-led Congress saw President Bill Clinton lying under oath as an impeachable offense. (A Senate vote later acquitted him.) Although a Democrat introduced articles of impeachment against President Ronald Reagan regarding the Iran Contra affair, Reagan never faced an impeachment vote. President Richard Nixon resigned Aug. 9, 1974, before he was impeached for the Watergate scandal.

Jim Walsh, a Republican who represented Central New York in Congress from 1993 to 2009, voted in December 1998 to impeach Clinton. “When he lied under oath, that’s when I knew,” Walsh recently told the Syracuse New Times.

According to local media accounts, Central New Yorkers were divided on whether Nixon should be impeached. But once Walsh’s father, Rep. William F. Walsh, learned of the so-called “smoking gun” tape, which showed that Nixon had tried to prevent the FBI investigation of the Watergate break-in, he turned against Nixon. “The president’s admission that he participated in a scheme to obstruct justice is shocking and disgusting,” he said at the time.

Walsh, now a lobbyist for K & L Gates in Washington, D.C., conceded that Trump’s administration is “making a lot of mistakes.” As for impeachment, though, “We’re not there,” he said. “It’s a little extreme.”

He attributes the passionate protests to shock over Trump’s election. “First there was shock, then dismay, then sadness, now anger,” he said. “People get angry and they get upset and they say things that they might regret later. Everybody in this country should be treated fairly under the laws. We have a process. Just because you don’t like someone doesn’t mean you can arrest them. Or impeach them.”

Walsh said Trump’s administration is “learning as they go.” But, he added, “Government is very different from business.”

The “whole Russia business,” he said, is “very weird. These are Republicans. My party is always opposed to Communism and Russia and aggressive moves in Eastern Europe and dictators and tyrants. They seem to want to be cozy with Russia.”

As for town hall meetings, that’s Katko’s call, Walsh said. “Where they do hold them, the congressmen don’t get a word in edgewise,” he said. “These aren’t terribly productive meetings.”

Walsh experienced an extremely hostile town hall meeting in January 1991, after he voted to give President George H.W. Bush authority to use military force to drive Iraq out of Kuwait. The vast majority of the 650 people at that meeting disagreed with Walsh’s vote.

“The people who opposed the war came out,” he said. “The people who supported it did not. A town hall meeting is not the best way to have a conversation.”

His advice to protesters? “It would be smarter to ask him to vote a certain way rather than stand against an entire administration.”

He’d like to see everyone, Trump included, “be more civil and use the art of language.”

The push and pull of parties and policies are “what’s great about this country,” he said. “You get Obama for eight years. Then you get someone completely the opposite. Is it comfortable? No, but it’s democracy.”