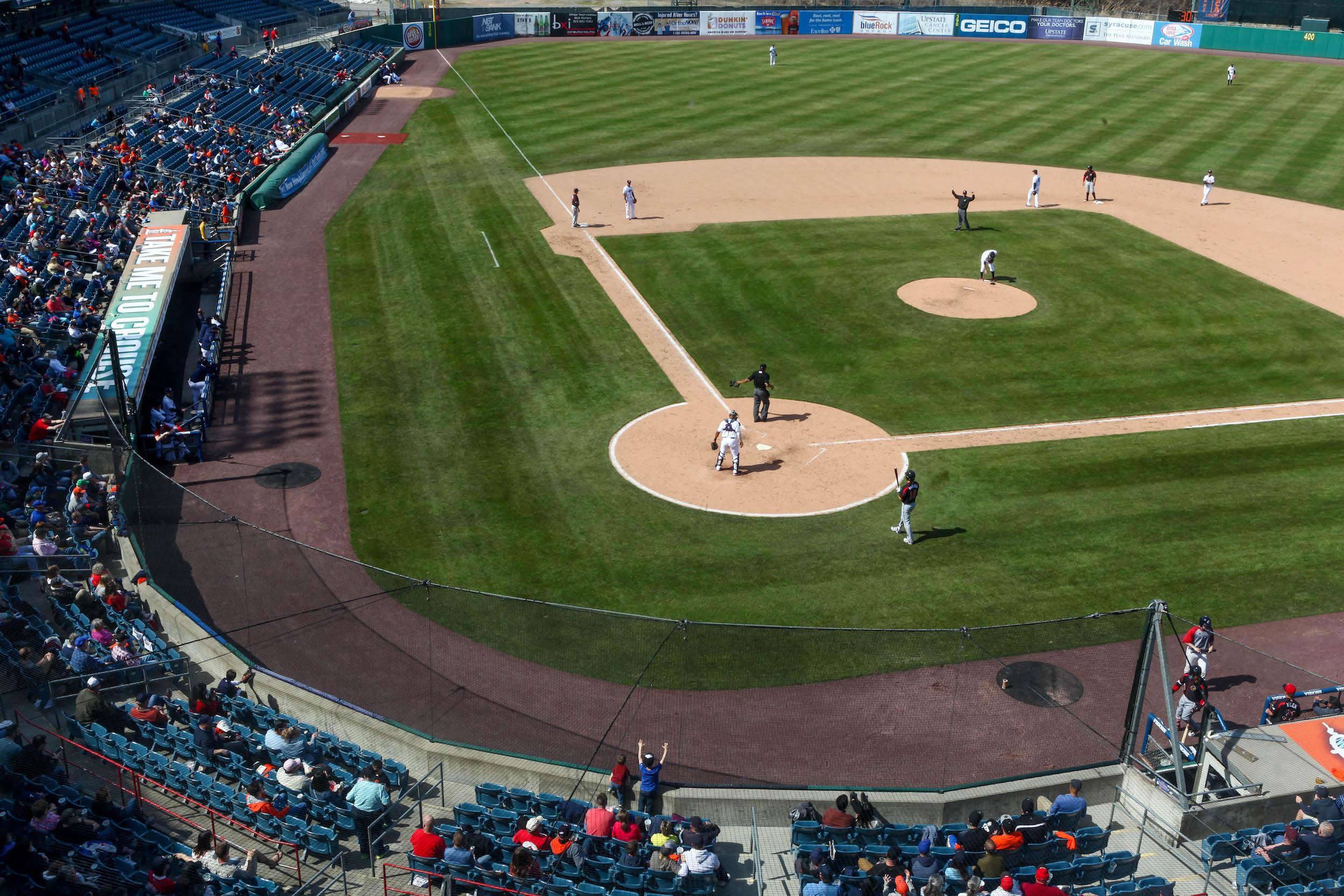 The Syracuse Chiefs’ season is under full swing with promotions, fireworks and more than 60 home games.

Fresh off making money for the first time since 2005, the Syracuse Chiefs’ Triple-A baseball team is looking to keep the momentum going in 2017.

To that end, the Chiefs have stuffed their schedule with promotions, unveiled new food choices, and started an in-seat concession service for all areas of NBT Bank Stadium. And though they lost their first three games of the season to the Rochester Red Wings, the Chiefs are loaded with former major leaguers who should keep Syracuse in the hunt for a playoff spot in the International League.

At the team’s annual stockholders’ meeting in January, the Chiefs announced they had turned a profit of $67,108 in 2016. That was the first time the Chiefs’ annual financial report showed a profit since 2005, when the team made about $12,000. 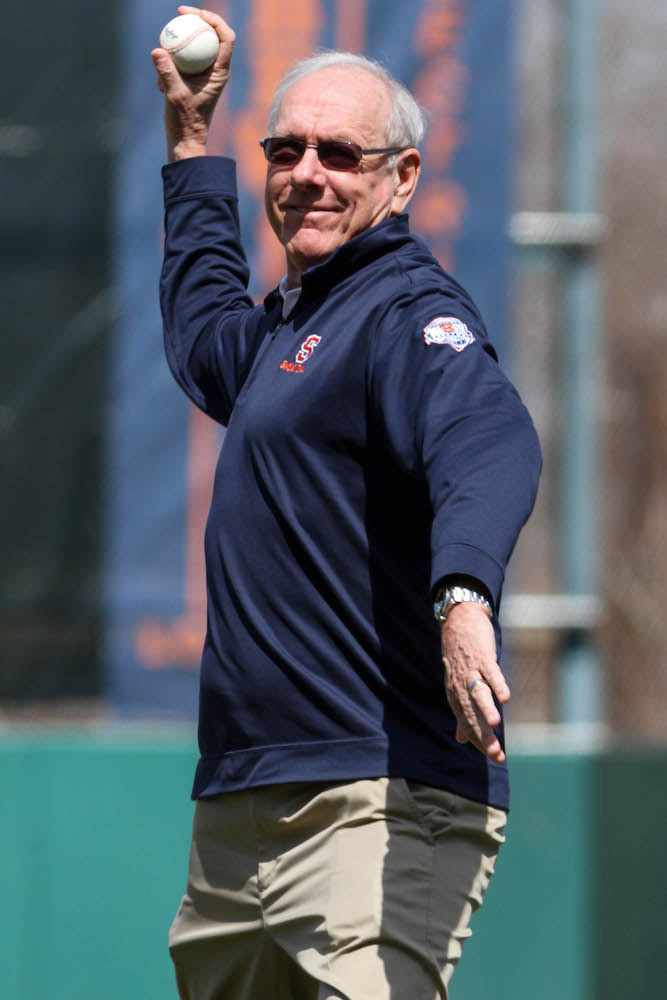 “Were doubling down. And this is the message that I told my staff,” Chiefs fourth-year general manager Jason Smorol told the stockholders who attended the January meeting. “What we do is working. Things that work, we get better at. We’re going to keep doing what we do because the fans have responded. We have momentum on our side.”

After the first two games of the season were postponed by rain, the Chiefs kicked their promotional schedule into gear April 9 with Jim Boeheim Added-Value Day. If you’ll recall, Syracuse University men’s basketball coach Boeheim said during the Atlantic Coast Conference Tournament that there was “no value” to playing the tournament in Greensboro, N.C.

The Greensboro Grasshoppers’ minor-league baseball team created a Jim Boeheim (No) Value Night that was scheduled for April 11. To show that Greensboro isn’t such a bad place, the Grasshoppers were offering any Syracuse resident who attended the game a free ticket and $20 in food and beverage vouchers.

In response, the Chiefs created Added-Value Day, when Boeheim and his wife, Juli, tossed the ceremonial first pitch, the first 1,000 fans received a T-shirt, fans with a North Carolina ID were admitted free, and a portion of a 50/50 raffle and $1 from every ticket sold was donated to the Jim & Juli Boeheim Foundation.

With the Chiefs set to return home Tuesday, April 18, with presumably a better record and better weather, here are nine things you should know about our local nine in 2017:

The Players. The Chiefs’ opening day roster featured 20 players who have played a combined 1,928 games in the major leagues, including pitcher Joe Ross, who went 7-5 with a 3.43 ERA in 19 starts for the parent Washington Nationals last season; veteran relievers Matt Albers and Neal Cotts, who was a member of the 2005 World Series champion Chicago White Sox; and first baseman Clint Robinson, who spent most of the past two years with Washington.

Among the returnees to Syracuse are first baseman-third baseman Matt Skole, who ranked among the IL leaders in home runs (24) and RBIs (72) last season; catcher Jhonatan Solano, who is back for his seventh season with the Chiefs and will soon become their all-time leader in games for a catcher; 2016 IL All-Star outfielder Brian Goodwin, who batted .280 with 14 home runs for Syracuse last season; and closer Rafael Martin, another 2016 IL All-Star who became the Chiefs’ all-time saves leader last year.

The Nationals’ top prospects with Syracuse are catcher Pedro Severino (.271 with two home runs and 21 RBIs in 82 games for the Chiefs in 2016) and pitcher Austin Voth, who ranked among the IL leaders in ERA (3.15) and strikeouts (133) last season. Severino is No. 9 and Voth No. 10 on Baseball America magazine’s list of Washington’s top prospects.

The Coaching Staff. With a veteran team, it’s helpful to have a coaching staff with major and Triple-A experience, and the Chiefs have that with manager Billy Gardner Jr. (fourth year with Syracuse), pitching coach Bob Milacki (third year) and hitting coach Brian Daubach (second year). Gardner was the IL’s Manager of the Year in 2014 when he led the Chiefs to their first division title since 1989 and their first playoff appearance since 1998. 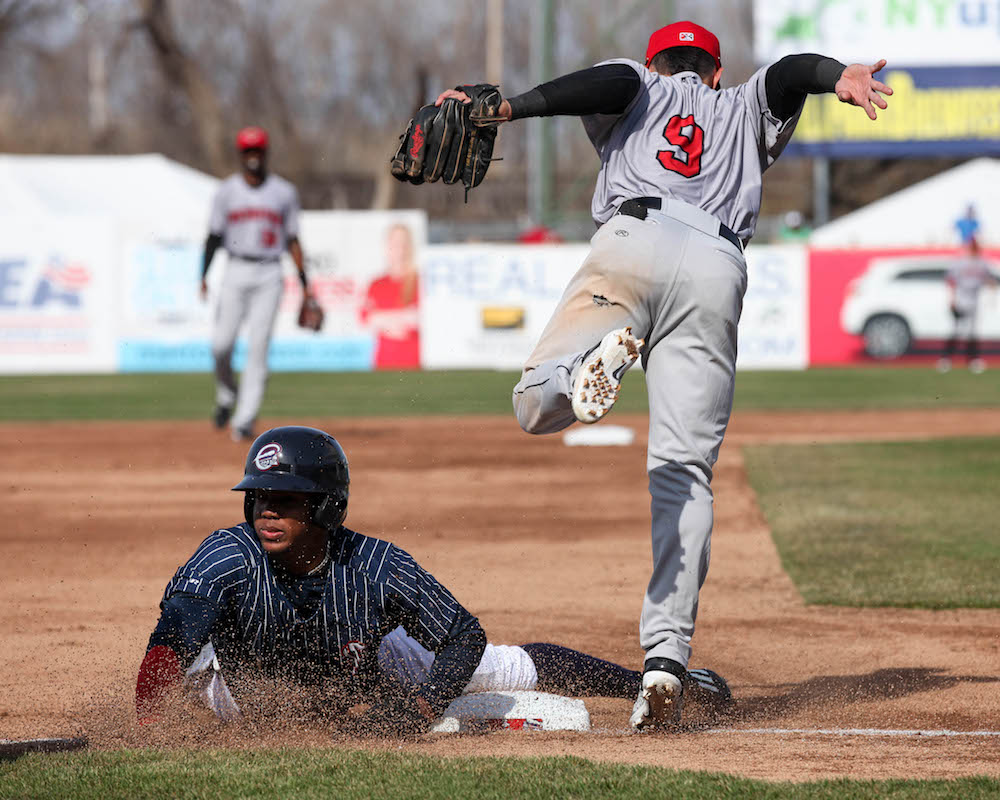 And all of you Yankees fans out there should note that several of the Yanks’ top prospects are at Triple-A Scranton/Wilkes-Barre: outfielder Clint Frazier, shortstop Tyler Wade, and pitchers Chance Adams and Jordan Montgomery. And others like infielder Gleyber Torres could be with the Railriders when they make their second visit to Syracuse June 26-29. Scranton’s first trip is May 11-14.

The Promotions. This year’s promotional schedule includes 20 post-game fireworks shows, including what the Chiefs promise to be the biggest fireworks show ever at NBT Bank Stadium on July 4. The schedule also features 23 giveaways, including replica jerseys and bobbleheads of Thurman Munson, Deion Sanders and other former Chiefs stars. And it wouldn’t be a minor-league baseball season in Syracuse without $1 Thursdays and the return of fan-favorite national entertainment acts such as the Washington Nationals Racing Presidents and the ZOOperstars.

For a complete list of promotions and dates, visit syracusechiefs.com.

In-Seat Service. Previously limited to VIP sections or premium seats, the Chiefs are now offering in-seat service for any seat in the stadium. Fans need to order through orderbrewster.com on their smartphones, and a member of the food service staff will deliver the food and drinks. Smorol said the in-service menu will be limited at first but will expand based on the capability to provide service and fan feedback. 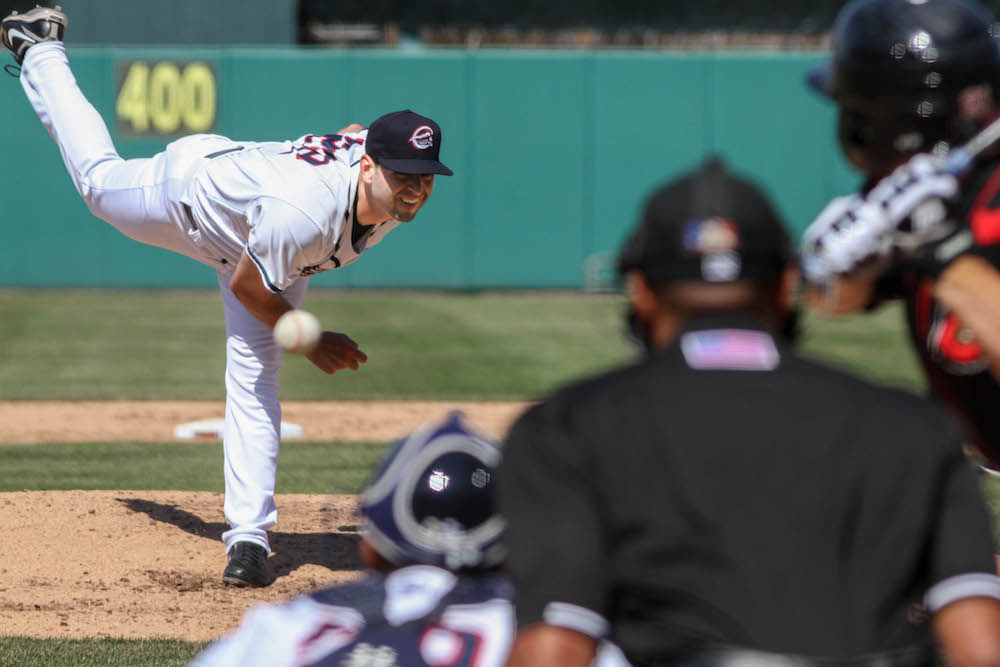 Super Pack Days. Starting April 22, the Chiefs are offering 10 Super Pack Days when fans can save $25 off a package that includes four reserved box tickets (200 Level), four Hofmann hot dogs, four medium sodas, one tub of popcorn, four giveaway items and a merchandise coupon. A note to memorabilia collectors: The Super Packs are being offered for all five of the bobblehead giveaways, so this is one way to guarantee that you’ll receive a bobblehead.

Visit the Chiefs’ website for more information on Super Pack Days, or call Will Commisso, director of ticket sales, (315) 474-7833.

New Security Measures. All fans entering NBT Bank Stadium will be scanned by a metal-detecting security wand and will be asked to remove their mobile phones, cameras, wallets or any objects that could set off the detectors. Fans will be allowed to carry in one 20-ounce factory-sealed plastic bottle of water per person and one small juice box per child. For more details on the team’s new security measures, visit the Chiefs’ website and search under “Chiefs Headlines” on the right side of the homepage.

How to Purchase Tickets. Visit syracusechiefs.com, call (315) 474-7833 or stop by NBT Bank stadium during normal business hours, Mondays through Fridays, 9 a.m. to 5 p.m.

Groups of 15 or more guests can purchase discounted tickets through the Chiefs’ group sales team. If you are interested in a group outing, contact Arnold Malloy at (315) 474-7833 or [email protected].

Jim Walsh Offers Perspective On Katko, Trump, Bush And Clinton
Playwright Raises The Woof Over His New Comedy
To Top