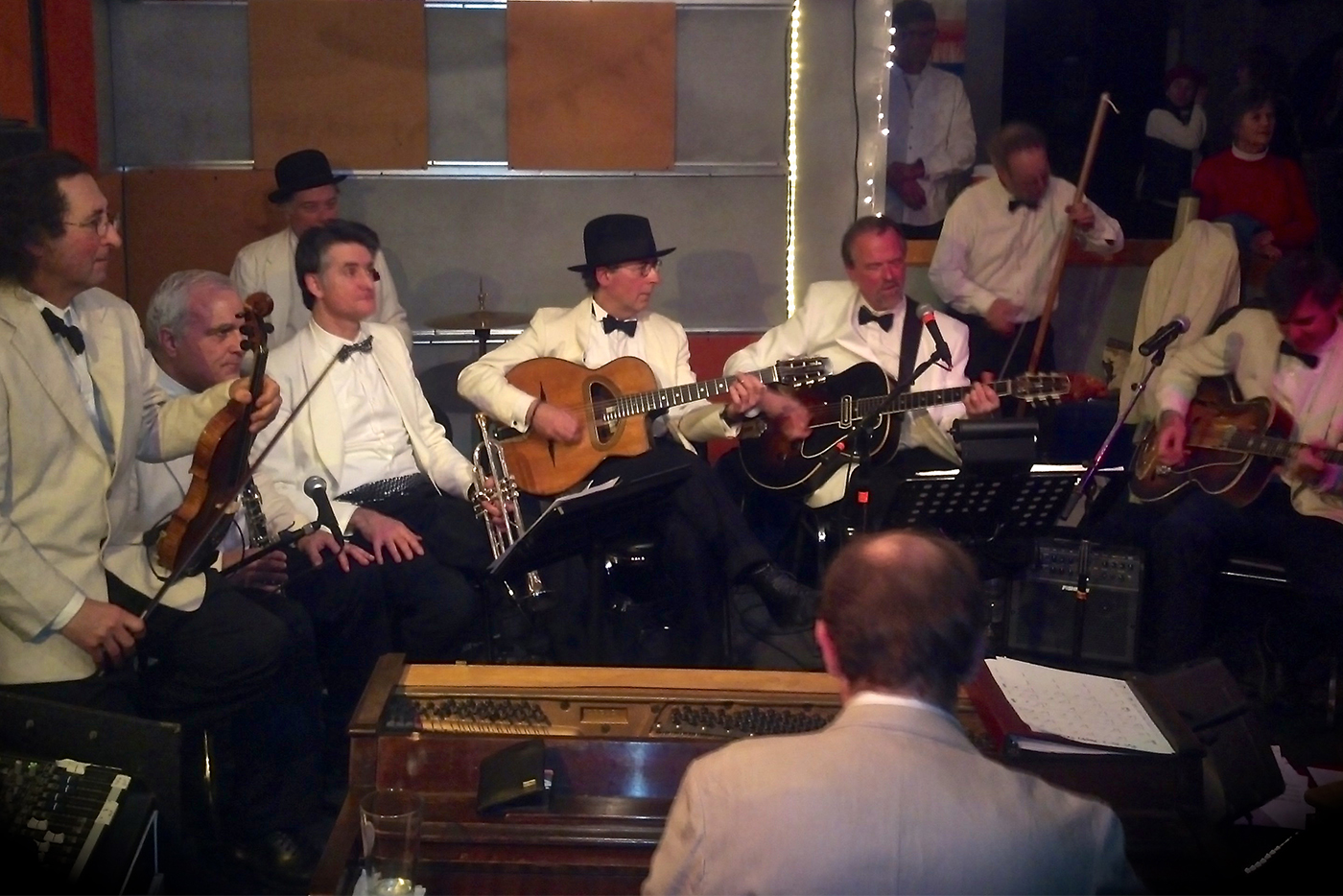 A single string drives Djug Django. Ithaca’s Gypsy swing band features the washtub bass playing of Syracuse native Jim Sherpa, who began thumping the gutbucket in the mid-1970s for the Water Street Boys jug band in Oswego, where he studied theater in college.

Every Wednesday from 6 to 9 p.m., this eclectic aggregation draws an enthusiastic crowd of jitterbuggers to downtown Ithaca’s Lot 10, a second-floor bistro at 106 S. Cayuga St., just off the State Street Commons. For the past five years, the band has made annual Salt City appearances as guests of the Jazz Appreciation Society of Syracuse (JASS), and it will do so again on Sunday, Jan. 31, 4 to 7 p.m., at Pensabene’s Casa Grande, 135 State Fair Blvd. Tickets are $15; call 471-1289 for details.

“This is one of the hottest little bands I have ever heard,” Campos says. “Every individual in this group is a brilliant and distinguished performer on his own, but when you put them together the band becomes even greater than its parts. I play all kinds of music from classical to jazz, but playing with Djug Django is a special joy because everybody swings so hard. When we come together, something amazing happens.”

Djug Django’s repertoire ranges from standards such as “Creole Love Call” and “Undecided” to original tunes by Dave Davies such as “Mudbone,” a paean to a pain-in-the-butt New Orleans busker. Davies shares lead vocal duties with Robinson, who sings rarely heard tunes such as “Frim-Fram Sauce” and “C’est Magnifique.” They play the standards “You’re the Cream in My Coffee” and “Besame Mucho,” the traditional “La Villa Rosa,” and Django Reinhardt tunes such as “Minor Swing” and “Daphne.”

Djug Django is a cooperative band in which all members contribute ideas. Each musician understands his goal and collectively they have a knack for selecting material that perfectly complements the Django Reinhardt pattern.

“The end result has a delicacy and refinement we rarely witness in jazz,” said the late JASS board member Pat Carroll, a veteran cornetist who led the Irish Channel Jazz Band here. “The group’s overall musicality is on a very high level indeed: sophisticated and dead-on. In fact, there’s a visible relaxation. These guys really enjoy playing together, and that spirit comes across clear as crystal.”

The washtub’s single string may seem limited, but Sherpa makes the most of it. Carroll, an astute observer of the jazz scene for more than six decades, was duly impressed: “This is a rhythm instrument, and Jim has a natural sense of rhythm plus the skill to obtain a full range of sound out of a single string. Simply amazing.”

Rhythm runs in Sherpa’s veins. He’s the son of octogenarian Joe Sherpa, who has retired as doorman at Hotel Syracuse and in earlier years played drums for the Mario DeSantis Orchestra.

Gypsy guitarist Jean Baptiste “Django” Reinhardt (1910-1953) was surely one of the most eccentric men ever to play jazz. And in a field populated by unconventional characters like Buddy Bolden, Jack Purvis, Mezz Mezzrow, Thelonious Monk, Pee Wee Russell and Sun Ra, that’s really saying something!

In November 1928, Reinhardt was already a professional entertainer at age 18 playing fiddle, banjo and guitar when a fire ravaged the caravan in which he lived with his first wife outside of Paris. Django’s career hung in the balance as the third and fourth fingers of his fretting hand were badly burned and remained paralyzed for the rest of his life. Incredibly, he trained himself to play guitar solos with just two fingers and used the two disabled digits only for chord work.

But the man’s eccentric nature owed more to his nomadic Gypsy upbringing than to his injury and recovery. Reinhardt’s biographer, Charles Delaunay, points out that Django would often show up for concerts without a guitar, a habit developed as a young man when his cousins routinely carried his ax to performances.

Throughout his career, Reinhardt would wander off to the park or beach and occasionally even refused to get out of bed. Django was known by his band, fans and managers to be extremely unpredictable. He would sometimes skip sold-out concerts to simply walk a sandy lakeshore or smell the dew on the grass.

“He was like a child,” said his longtime colleague, violinist Stephane Grappelli.

The group recorded standards such as “Tiger Rag, “Sweet Sue” and “St. Louis Blues,” as well as Reinhardt/Grappelli originals such as “Djangology,” “Bricktop,” and the international hit “Nuages.”

Django had become fascinated with American jazz, especially Louis Armstrong. He referred to Armstrong as “my brother.”

The Quintette du Hot Club de France disbanded in 1939 when World War II erupted and Grappelli chose to stay in England where the quintet had been touring. Django returned to France where he re-formed the quintet with clarinetist Hubert Rostaing. But the Nazi occupation doubly threatened Reinhardt’s very life. Not only were the Germans imprisoning and murdering Romani Gypsies by the thousands, they also officially disapproved of jazz. As a result Reinhardt tried to establish legitimate music credentials by dabbling in classical composition. Since he himself could not read music, however, he employed an assistant to notate his performed improvisations.

Django’s devil-may-care attitudes followed him to the United States when he toured with Duke Ellington in 1946. Grappelli and the rest of the Quintette du Hot Club de France had also been invited, but Django hadn’t bothered to tell them.

As usual, Django arrived in New York City without a guitar, so he was forced to borrow one. Instead of using a Selmer Modèle Jazz, the acoustic guitar he made famous, he used electric Epiphone Zephyrs or Gibson L5s which, many critics opined, failed to complement the delicacy of his style. Occasionally Django was handed an unfamiliar guitar, and observers say it took him a full five minutes to tune it.

When he disembarked in Cleveland for his first show with Ellington, Django was disappointed to see his name missing from the flyer promoting the concert. Either the promoter had not heard of Django or chose not to advertise his appearance for fear that he wouldn’t show up.

The tour ended with a two-night stand at Carnegie Hall. On the night of the second show, Django arrived late and again without a guitar.

After the tour he played Café Society Uptown in Manhattan, where he drew large crowds playing four shows daily backed by the house band. After he returned to Paris in February 1947, he told journalists that Frank Sinatra made the best music he heard in the United States.

Even Django’s untimely death illustrated his lifelong iconoclasm. On the morning of May 16, 1953, he awoke in pain, saying he was unable to move. Before the doctor arrived, however, Django had risen and left his home to visit friends. Soon after leaving the house, he collapsed. He was rushed to a hospital but never regained consciousness. He died of a cerebral hemorrhage at age 43.