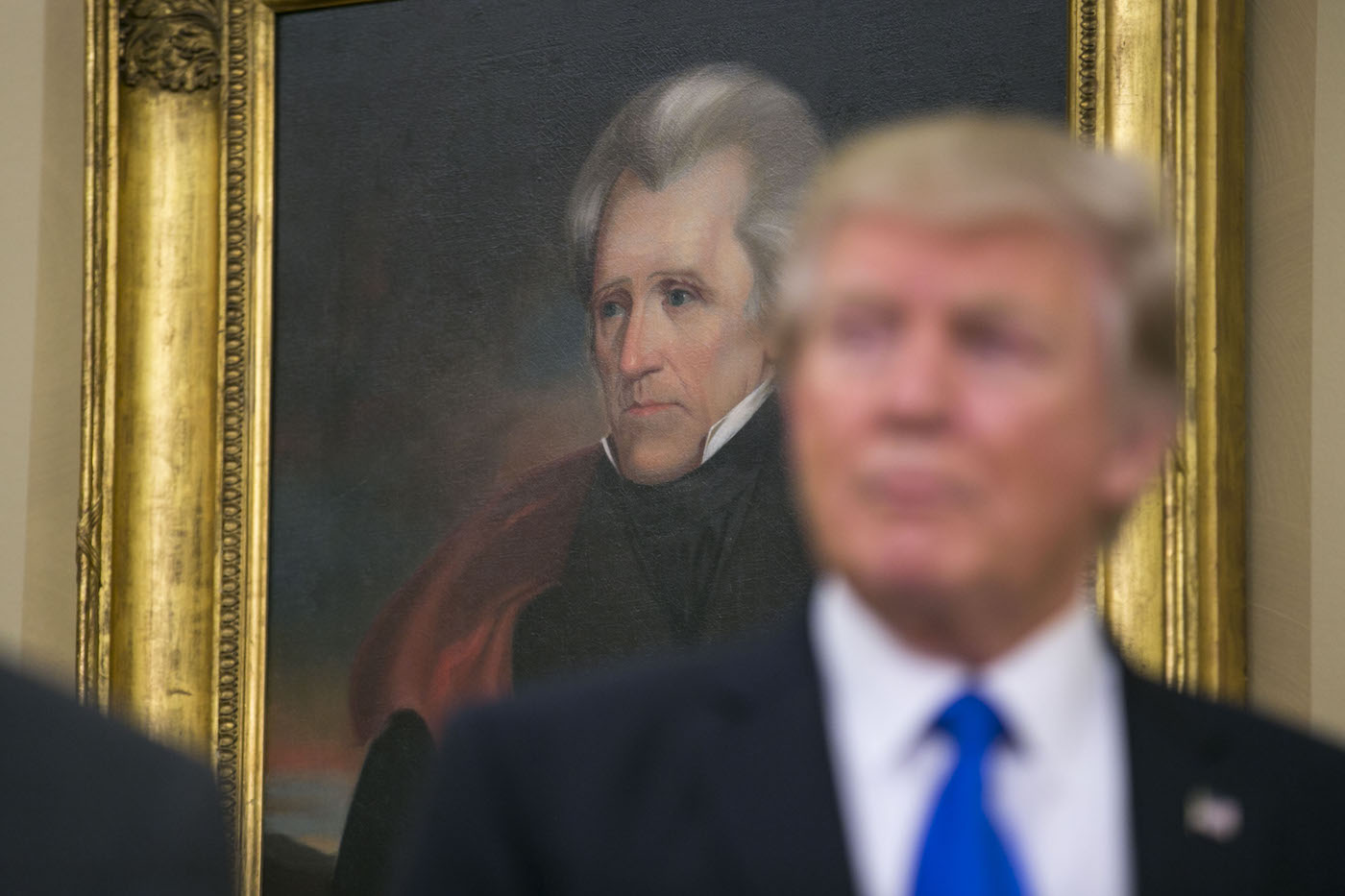 The current administration has similarities to the rise of “Old Hickory” 200 years ago.

It isn’t abnormal for American presidents to compare themselves and their agendas to that of those who held the office before them, or at the very least, consider one of them as their role model for how to run the office.

George Washington, Abraham Lincoln, John Kennedy and the Roosevelts are religiously quoted and referenced by candidates in stump speeches and the like.

But not in a very long time has the nation’s seventh president been so idolized by a current administration.

Even before President Donald Trump’s surprising election last year, there were many who likened his extremely unconventional candidacy to that of Andrew Jackson, who prior to Trump was the ultimate outsider president who captured the hearts of the common man in a populist uprising that helped him capture the White House.

But it’s not just journalists or historians that make that comparison. The president himself does too.

Trump never Jacksonized himself on the campaign trail, but since taking office he has welcomed and embraced the label of a new version of “Old Hickory.” Trump has placed the portrait of Jackson in the Oval Office. Following Trump’s inauguration speech, his chief strategist Steve Bannon said “I don’t think we’ve had a speech like that since Andrew Jackson came to the White House.” And last week, Trump even paid homage to Jackson by visiting his old homestead and grave in Nashville.

With Trump’s presidency so young, it’s obviously too early to tell if it mirrors to that of Jackson’s. What has generated the pairing has really been Trump’s ascendancy to the presidency, which does have some fascinating similarities.

The election of 1828 is considered by many historians to be the dirtiest presidential campaign in our history. While it’s annoyingly common for people nowadays to say each election is the worst, 2016 may be the most on par with 1828 since 1828 itself.

And that may be because it occurred in a similar political atmosphere. That was the year Jackson challenged incumbent John Quincy Adams. Like Hillary Clinton, Adams had an impressive resume of public service. He had been a congressman, U.S. senator and diplomat. Also like Clinton, Adams had most recently been secretary of state and a direct relative to a former president.

Like Trump, Jackson was popular, bombastic, had a temper and was as outside the political class as much as he was condemned by it. Thomas Jefferson had called him “a dangerous man.” But Jackson represented a movement that feared the government had been taken over by the elite and he was there to return it to the people.

Like Clinton, Adams represented the establishment, the old politics. Jackson was the populist who rode on a message that Washington was out of touch with rural America — a message that ultimately won.

Jackson transformed the role of newspapers in elections as an avenue to get that message out to the public, much like how Trump utilized social media.

But to win, a populist who carries that message has to already have name recognition. While Jackson and Trump were brought up differently — Trump was born to a well-off family in Queens, Jackson to a poor mother in a log cabin — they both found their niches that led them to celebrity. Jackson was a war hero, Trump a billionaire businessman. Jackson became a national figure due to the 1814 Battle of New Orleans, Trump had The Apprentice.

Their approach to politics is also similar — that it’s tilted against them. Jackson had first run for president in 1824 and won the popular vote against John Quincy Adams and two other candidates, but didn’t win enough Electoral College votes. So the House of Representatives selected the president and picked Adams. Jackson screamed bloody murder, calling it “a corrupt bargain” and an insult to the clear choice of the people. Trump was known for repeatedly calling the electoral system “a rigged system” and still repeats theories of voter fraud, though no evidence has been brought forward.

There is good reason to wonder why any modern president would want to be compared to Jackson in any way, as his legacy has been darkened over recent decades. He was after all, a slave-owner, a duelist and heavy drinker — all things Trump is not. But Jackson is also remembered for pushing through the Indian Removal Act of 1830, which took Native Americans off their land and forced them west, all the while ignoring a Supreme Court ruling that allowed them to stay. The journey killed thousands, and now every child in school learns about the Trail of Tears, no doubt one of the saddest and most embarrassing chapters in American history.

There is also good reason to believe that if Trump wants to make comparisons to former presidents, he’s got the wrong Andrew.

While he is comfortable with being the new Andrew Jackson, many are speculating he is more like Andrew Johnson.

Johnson was Abraham Lincoln’s immediate successor upon his assassination in April 1865. Unlike Lincoln, Johnson was a Southerner, a former slave-owner and didn’t exactly embrace the federal government’s new role in freeing and then protecting rights of former slaves. And like Trump, Johnson was stubborn, didn’t take criticism well and created conspiracies about those out to get him. He also thought of Jackson as his hero.

Johnson was also the first president to be impeached — something some people foresee in Trump’s future.

Whether Jackson or Johnson is more correct, or whether Trump stands most on his own ground, is yet to be determined. It takes a long time after presidents are long gone from office for their legacies to settle in. Their terms have consequences, both during and after.

But there is one comparison between Trump and Andrew Jackson that is absolute, and it always will be: They both changed the American presidency forever.