If it were merely the sizzle, pace and gags of the trailer for Inherent Vice that drew you to the Saturday matinee at the Regal chain in Destiny USA amid a big post-New Year crowd — with only scattered top-section singles seats left, later comers were spilling into the lower level — you may have left cussing.

Bait and switch? Misrepresentation? How dare they! Hey, the trailer-makers got you there, didn’t they?

Although not a comedy nor a frantic farce, this odd duck of an odyssey directed and written by Paul Thomas Anderson adapted from the 2009 Thomas Pynchon novel of the same name certainly carried certain other pleasures, if you were willing to keep an open mind through the entire 2-hour, 28-minute process and let Pynchon’s scattered plot and Anderson’s dreamy storytelling touch wash over you LA noir style.

The time is 1971 and the main man is Larry “Doc” Sportello, a guy who lives hard by the beach and practices his trade in an office suite of other doctors. His specialty, though he sometimes sits feet in patient-use stirrups and face in forget-the-pain gas mask, is Private Eye. In both his home and his office and various spots throughout Los Angeles, Doc offers enough moments of comic relief for said trailer-makers above as he maneuvers through the story told to him by an ex-girlfriend who suddenly vanishes along with her rich married sugardaddy land developer, and then finds himself waking up alongside a dead bodyguard of that developer with a crack detective staring at him.

All of this and some more happens slowly, allowing Joaquin Phoenix to wring a whole lot out of the role of Doc. He’s a hippie who loves his drugs and his ex-girlfriend and an assistant DA and the cat-and-mouse game with the smug detective giving him grief and the pieces that start falling into place as cases from other clients align with ex-girlfriend and sugardaddy and a syndicate bigger than both of them.

Phoenix’s expressive face looks quite at home during the drug fog of that time, as well as the delight of the slow chase and the light that comes on when the fog lifts and good things happen. 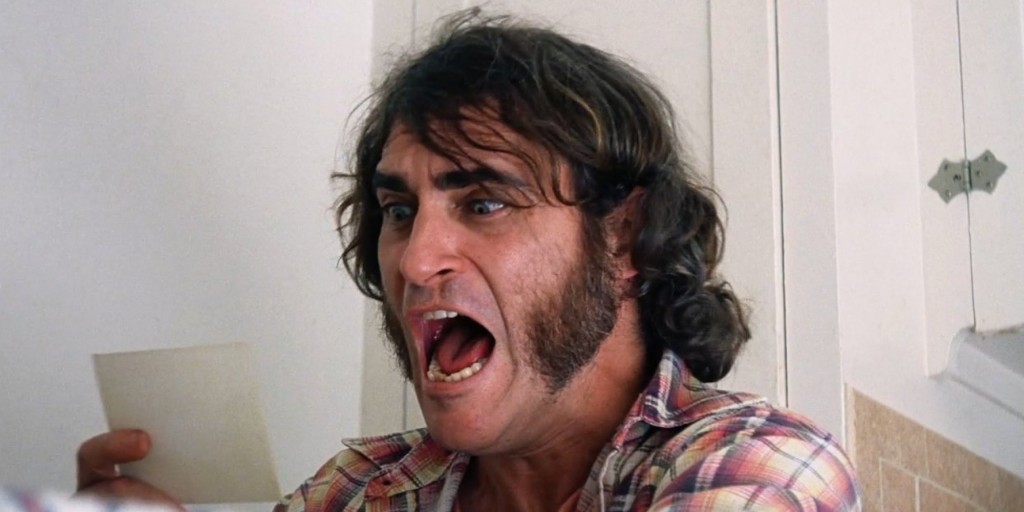 Josh Brolin is the next best thing in the movie as Detective Christian “Bigfoot” Bjornsen, a terribly vain guy who treads heavily wherever stomps on crime and maybe hides some insecurites, too. The chemistry between the dirty hippie PI and and clean-cut detective is curious and interesting every scene.

There are big stars good in smaller parts, with Owen Wilson smooth as scattered snitch Coy Harlington, Reese Witherspoon properly reserved and delightfully not as deputy D.A. Penny Kimball, Martin Short loopy as executive dentist Rudy Blatnoyd, Benicio del Toro suave and leathery as a helpful marine cop, and Eric Roberts evil and out of it as sugardaddy Michael Wolfmann.

Of the lesser knowns, Hong Chau as massage parlor hostess Jade and Jena Malone as recovering junkie and searching wife Hope Harlington were spot on. Disappointing, though, was spotlight young actress Katherine Waterston in the plum role of ex-girlfriend Shasta Fey Hepworth, who brought little more than a pretty face and annoying coyness. Or maybe it was my sadness and distaste for her and Doc’s characters in their stripped-down reunion scene in his apartment that colored my opinion against her.

In any case, if you lived through 1971 as a teenager, or wished that you had, the hippie feel in Inherent Viceseems realistic. Just go prepared for the long, strange trip it is.